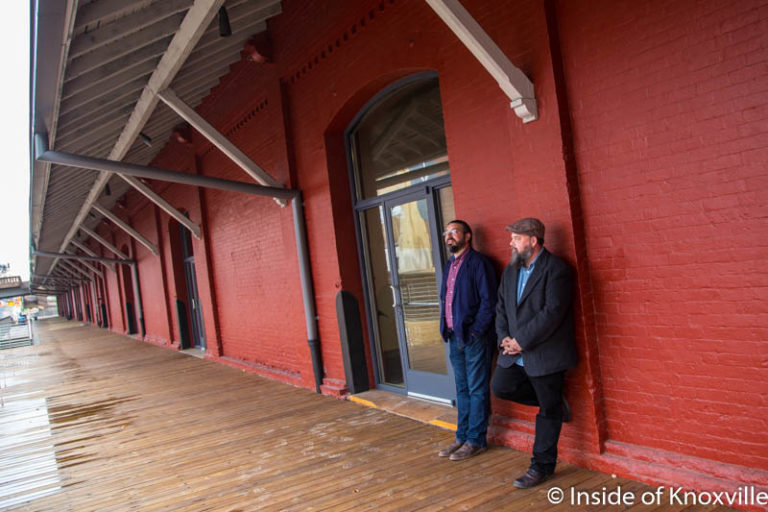 Remember when Knoxville only had a brewery here and there? I know, it’s hard. With the proliferation of breweries came questions about our capacity to support so many. And then we did. And they helped grow a craft beer culture. The same thing may be happening with spirits as a second distillery, Post Modern Distilling, announced plans to open for business at 205 West Jackson in the Jackson Terminal Building.

Among the several partners are two, Stanton Webster and Eric McNew, who will be in control of operations. Both are veterans of Knox Whiskey Works, with Stanton having been a founding partner and Eric joining the operation at an early stage. Prior to arriving at Knox Whiskey Works, Eric worked as creative director for Case Cutlery. He and wife, Mandee, also operate the successful Knox Foodie website and social media presence.

Stanton sold his interest and Eric managed the tasting bar before joining Stanton in the new effort. Stanton cited the difficulty of finding a “common vision” with ten owners at Knox Whiskey Works. Different approaches should produce more variety for local consumers. Eric added that they want to produce an accessible styled beverage “that the experienced bourbon drinker would enjoy, but perhaps, also, the craft beer drinker.”

The two will be drawing on their experiences and will, with assistance with students in the distilling program at South College, be the primary distillers. In recent months, Stanton has worked at local breweries to hone his skills. I asked about the “post modern” reference and Stanton said the two plan to take the classic forms and “add modern riffs to that to move it along.” Not wanting to be pigeonholed, they say they will offer everything needed to stock a bar, as well as cocktails which highlight the spirits.

The team has chosen a large space on the eastern end of the Jackson Terminal Building as the spot for their production facility and tasting room. At about 4,000 square feet, it should offer plenty of space for production while leaving ample space for a comfortable tasting room. Engaging consumers in a significant way will be part of the model as they offer interactive tours and classes.

The emphasis with the spirits produced will be on making honest, good product with as much local infusion as possible. Not as much interested in flavored whiskeys and vodkas, this will be a stripped-down, honest version of the beverages which the group hopes will do justice to the farm labor that produces the elements going into the product.

Stanton was raised on a farm and values the hard work invested in a harvest. He wants to emphasize the roots of the process and hopes that the growing craft beer and spirits movement in the area will give farmers a new market to tap, allowing their work to be more profitable.

While there are numerous details to be worked through and numerous federal, state and local license and requirements to address, the two are clear they want to produce not only a special set of spirits, but also a special place. Eric said, “I want people to be surprised this is in Knoxville.”