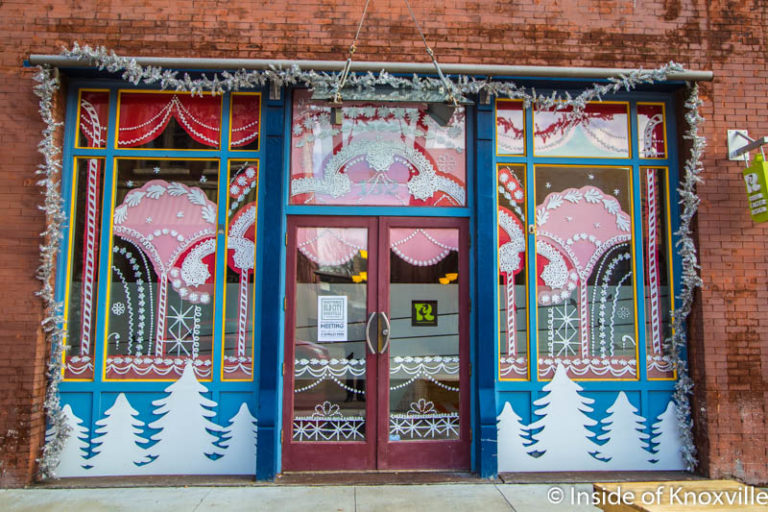 In recent years, downtown merchants have joined in a window decorating contest. It’s been all in good fun and the upshot was that downtown storefronts became increasingly attractive, which was the point. I remember when it seemed to really take off several years ago. At the time it seemed to me that we’d taken another step to becoming the city we could become. It felt like we’d gone “big time.”

This year an optional contest, with CBID, Visit Knoxville and City Special Events coordinating that, the Peppermint Trail and the Elf on the Shelf programs. (Ed. note: The previous sentence was updated to correct earlier misinformation.) I haven’t interacted too much with the Peppermint Trail, so I’m not sure how that’s going, but Urban Girl really dug the Elf thing, so that was a big hit in our family. I heard from merchants it was drawing a lot of participants, which is the goal.

A friend, who I will not name because I named him twice last week and he demurred, posted a few photographs of this year’s decorations and it reminded me I hadn’t posted any here, as is my custom. It also made me tune in to the fact that the decorations are as attractive and elaborate as ever – despite the absence of a coordinated effort. Another step in our growth? Perhaps.

The photographs here represent less than half of those I kept after a couple of expeditions with the camera. I’ll have the complete collection on the Inside of Knoxville FB pages sometime later. Those shown here aren’t necessarily the best decorations, but they represent some of the best photographs I took. Some of the windows and other decorations were more difficult to take, I didn’t have the best light, etc.

I’ll not comment that heavily, as the creativity and care so many people took with their decorations speak for themselves, but it is interesting to notice how so many businesses personalized what they did. The decorations in the lead photograph, for example, would have to be done by designers, wouldn’t they? The same could be said of the next three, Tim Love incorporating the antlers into his door decorations, Pretentious glass using the ornaments they make each year as part of theirs and Citi-Fido incorporating their pet products in the display.

I also tuned in to the fact that more businesses incorporated not just their window fronts, but their outdoor spaces in their decorations. Downtown Grill and Brewery, Boyd’s Jig and Reel and The Oliver Royal are shown above and all did a great job with outdoor spaces. In all three cases, it made their chilly patios a warm invitation to come inside. Others did similar things.

Fizz was beautiful on Market Square and the Hotel Oliver looked as elegant as one might expect. Maple Hall joined in with a great window this year, as did the Phoenix Pharmacy and Fountain (not pictured). The exercise reminded me how many new businesses we have in the mix this year who didn’t exist a year ago. Several pictured here are steadily attractive every year. Mast General Store, Urban Bar,  and Nothing Too Fancy are always among the most creative displays.

The final photo isn’t from a business and it’s not elaborate. It’s in a perfect spot on the second floor corner of Walnut and Union. It’s highly visible and Urban Woman and I have enjoyed it as much as any other decoration this season. Thank you to the owners! One final thought since I’m not sure if I’ll get another chance to say it: Could we keep the clear lights on the trees and light them year-round? It adds an elegance to the city that we love and it really doesn’t have to be just once a year. Or maybe it’s just us. Happy Christmas everybody, and happy all the various sundry holidays being celebrated this time of the year.