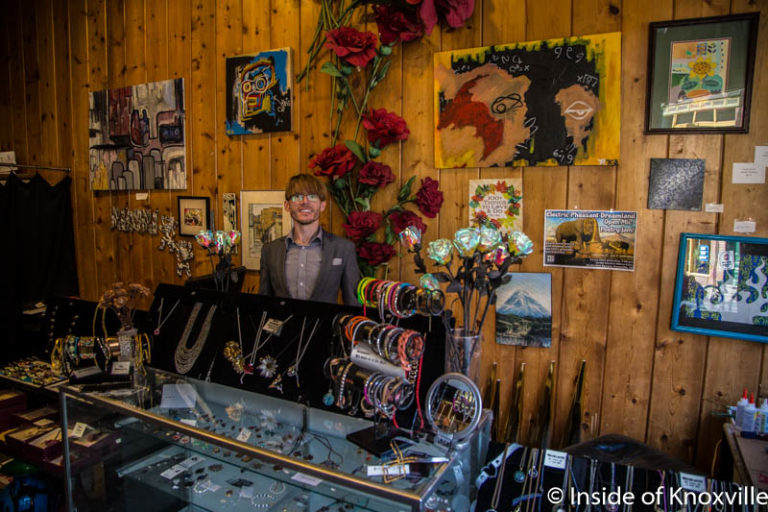 It’s one of those open secrets we all overlook somehow. New openings make for big splashes – especially now that so many people are attuned to downtown Knoxville. A new bar, restaurant or development announcement is often met with great interest. But who are the people who’ve been doing the work of retail quietly and steadily since before there was much interest in what happened in our center city?

I’ve talked about a number of them, but consider that when Tice Tansil moved Boldure Gifts from his home to a store front at 107 S. Central Street in the Old City, none of the retail there now was in existence. Retail has always been a tenuous enterprise in the neighborhood and there were other retail establishments in that section of downtown that have since departed.

Earth to Old City was an early inspiration and they survive, though they left the Old City. Big Dons the Costumier is still around, but like so much of the retail that has passed through, it is a targeted and specific retail. There are only a few other retail establishments in the area, including Pretentious Glass, White Buffalo and Adorn and that’s a struggle that Tice feels when visitors to downtown ask where to shop next, there’s not a lot of direction to give the casual shopper. Rala will join the group, so it’s growing.

Tice grew up in Cookeville, where he graduated from high school and attended Tennessee Tech, majoring in Business Management and Marketing. The Internet was fairly young, but he became interested in using the new medium to start a business, realizing it allowed him to expand his potential market beyond nearby customers. He started selling gifts online in the 1990s and that remains a large portion of his business, with sales going through RomanceHer.com.

Interested in living in a larger city, he moved to Knoxville in 1999 and he said it suited him from the beginning, with Nashville, which was nearer to home, seeming just a little too large. He pointed out there were also business advantages since mail arrives at its destination more quickly from cities Knoxville’s size and larger.

Flowers have been a big part of his business from the beginning. He has always sold jewelry, but he said people were hesitant to buy jewelry over the Internet in the 90s. He also toyed with chocolate, but that was problematic to ship. Preserved flowers quickly became his best seller and they continue to be his best seller online, coated in gold, silver, platinum, clear glaze and much more.

Smaller jewelry items such as rings and earrings appeal more to the casual shoppers who drop in to his store. The products include some local and some from elsewhere. You’ll find items as low-priced as $2 (wood and acrylic rings) up to as high as around $100 for some of the larger roses.

Once in Knoxville, he continued to work out of his apartment doing Internet sales and the business grew. Eventually the business took over the apartment and he needed more space. He also pointed out that while he loved the commute from one part of his home to another, he missed having interaction with others and also wanted some separation between home and work.

The solution came in a 2002 move to the Old City, first in a part of his building now included in Boyd’s Jig and Reel, which was taken by an expansion of Manhattan’s before they closed. Kristopher Kendrick owned the building at the time and gave him his first lease. When Manhattan’s expanded in 2007, Tice moved the business next door and has been there since. In Old City business years, fourteen (soon-to-be fifteen) years is a lifetime.

He points out that in those fourteen years he’s seen a lot of businesses come and go. The ones that seem to last the longest, he observed, have something like his or Pretentious Glass’ online sales that support the street retail, though he feels it serves a purpose. He’ll often stay open later than his normal hours when he knows a lot of people will be out, like on a First Friday, simply so they see there is a business at his location and, perhaps will remember and return. It’s important to look for anything that might help compete with big box stores and the online behemoths.

While the massive increase in residents during the last fourteen years is noticeable, Tice says it hasn’t seemed to have had a commensurate impact on his business, which is consistent with what I’ve heard from other retailers. It’s the visitors – whether from another state – or from our area who come into downtown with the idea of shopping. He’d like to see more retail density, feeling that somewhere around ten stores for people to browse might be about the magic number for the old city to become a retail destination.

It’s been an interesting journey and he’s glad he did it. He worked another job only the first few months and got started with small amounts of credit on credit  cards and it’s supported him for nearly twenty years. He loves the Old City and the range of people he finds there. He hopes the youthful vibe it has maintained will continue.

You’ll find him in the store from 10:00 AM to 6:00 PM Monday through Friday, though, as I said, he sometimes stays open later. He’s currently only open on the weekend if there is an event or some reason to think more people will be out. Stop in and say, “hello,” and check out his stock. Visit RomanceHer.com to see the online inventory and visit him on Facebook to give him a “like.”