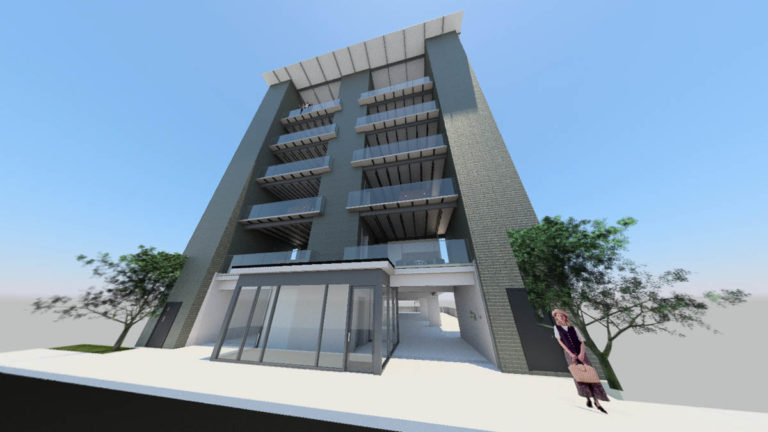 Rendering of the Front of The Overlook

I’ve written before about a quiet section of town along Hill Avenue, just to the east of Henley on the north side of the bridge. It’s seen some change in recent years – and months – including the announcement, just last month, of a nineteen story building proposed to face one end of that block and run down the hillside behind the other buildings on the street. The changes continue with the announcement of The Overlook, a six-story building fronting Hill Avenue on what is now a vacant lot used for parking.

The building is the project of architects and developers, Josh and Jessica Wright of Architects Wright. They are the architects of record for the Oliver Hotel and have practiced since 2001. Josh is originally from Memphis, and he and Jessica were in the 2001 architecture class at UTK. Josh was one of the first residents in the Sterchi Building when it opened.

After graduation, the couple spent time in Memphis, returned to Knoxville for a few years and then, in 2007, decided to live on a sailboat, with plans to sail around the world. They made it from Memphis to New Orleans where they spent a year. The recession had settled in and there was very little work for architects and after considering options in the cities with which they were connected – she’s from Baltimore – they decided to check out California.

It was there that they realized they missed Knoxville. Josh says they missed the artistic and entrepreneurial spirit. They returned to the city and bought a mid-century modern home, “with the roof falling in.” They started Coolcorc, a company designing a range of products from cork. They presented at the first Pecha Kucha, delivering their entire talk in Haiku.

After their return to Knoxville, their company began to get work and they’ve continued since, but Josh says he’s been intrigued with the idea of working on the development end of the building industry. This venture is their first foray into that world and Josh says it intrigues him.

His interest is in developing a building that is tall, but “creates a community or neighborhood.” He also said he wanted it to be the kind of place he and Jessica and their two children would want to live, saying, “As an architect, you should live your work. His family develops hotels and developed a mosque in Memphis, but his interest is to work downtown and wanted a neighborhood like this one to explore his concept.

The sliver of land selected is beside and just to the east of Historic Riverhouse at 614 W. Hill. The empty lot has served as a parking lot for residents of Riverhouse and they will continue to have a right to park there, but they will be in a garage. It’s one of my favorite parts of the design and answers a question that is relevant elsewhere in downtown (hello, 200 block of Gay!) of how a parking lot that is leased for many years into the future can be developed.

The answer in this case is to build around and over it. With different terrain, lowering the garage underground might be a better option, as it would allow for retail at the street, but that isn’t an option in this case, given the sharp slope of the bluff behind it. Still, there will be enough space in the garage for residents of both Riverhouse and The Overlook and residents of the new building will have a dedicated space.

To integrate with the street, the building will mimic the symmetry of Riverhouse, with the lobby centered on the front and the entrance and exit from the parking garage on either side. It will also, similarly have balconies lining each floor facing Hill Avenue, though those on Riverhouse are decorative. The garage also includes secure bike storage.

Above the parking garage, the units begin on the second floor. Floors two through five have two homes at each level and the sixth floor is offered as a penthouse, taking the entire floor. Purchasers of the second through fifth floor have several unusual options. The living space may be placed on either end – facing the river or facing the street. The river view may be obscured in the future. Purchasers may also select for their units to be two or three bedrooms, to have an open or private kitchen and may select finishes, described as “warm modern, urban traditional or refined industrial.”

The building is set back from neighboring lots in order to ensure light through the windows should buildings be built on either side and construction is steel and concrete. The AC is high efficiency and energy saving. Residents also have the option to have a dedicated space with a charging station for an electric vehicle, an array of solar panels on the roof and retractable insect screens for the rear balcony.

A precise construction schedule has yet to be set, but the hope is to break ground in the next 45 days with completion of the project anticipated in about sixteen months. The units are available for pre-purchase via the website or by emailing or calling Kimberly Dixon Hamilton at kimberly@knoxvilledowntownrealty.com or 865-588-5535.