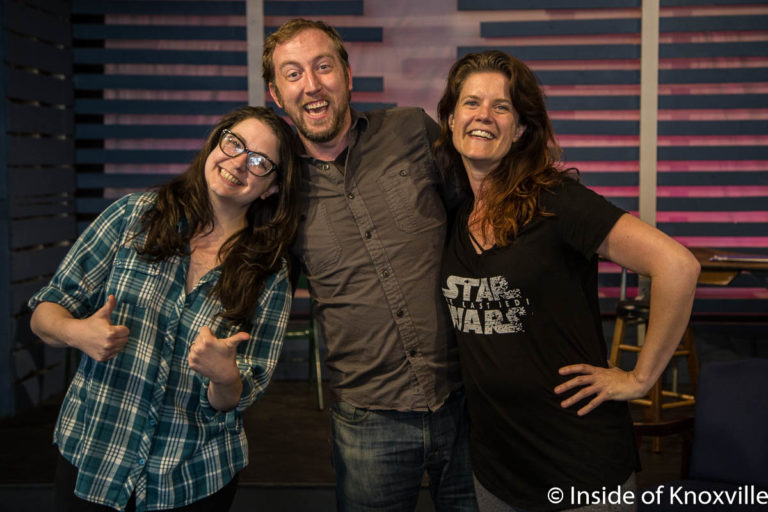 It’s been an evolutionary process since Modern Studio opened in January 2017 at 109 W. Anderson Avenue (a half block from the primary intersection in Happy Holler). At the time, the business featured two owners, Burke Brewer and Victor Agreda, Jr., as well as consultant Carolyn Corley. The plan included multiple uses for the building, ranging from performances to maker spaces.

In just over a year, the venue has proved an effective center for performing arts, with many successful shows and the ownership has shifted. Burke and Victor have shifted their focus to their own business ventures and have opted out of this project. Carolyn Corley, the erstwhile consultant has become an owner, along with Sara Gaddis and JP Schuffman. The three comprise the Knoxville Theatre Club, which will be the operating entity for the newly dubbed Holler Performing Arts Center.

The three have extensive backgrounds in performing arts, in general, and theatre, in particular.

Sara grew up in Knoxville, but left to study at the American Musical and Dramatic Academy in New York City. She lived in the East Village and got parts in, “off, off, off Broadway productions,” and indie shows generally and began to write. She tried storytelling, comedy and poetry at open mics. She met JP through a mutual friend and the two began to work together. They co-wrote, “Cindy and Ella,” which was their first production here.

JP is from Nashville and he moved to Knoxville in 2004 to attend UT, forming the Wild Time Players during his first stop here. He then moved to New York City where he produced shows in the lower east side. He and Sara began a personal and professional relationship and moved to Nashville, where they produced “Cindy and Ella,” and “Mad King Lear,” an adaptation of the Shakespeare play. After a brief stint in Dallas, they returned to Knoxville two years ago. They worked with Tiger Lilly Theatre and produced, “Story Story,” at Modern Studio.

Carolyn first caught my attention almost five years ago when her performance in the lead role in “Venus in Fur,” produced by Flying Anvil Theatre blew me away. Originally from Maryland, her family moved to New Mexico when she was thirteen. Her mother moved to Knoxville and Carolyn stayed in New Mexico, but when her mother had a recurrence of cancer, she moved to Knoxville and enrolled at UT to help her mother, who would die in 2004. Since, she’s acted and produced both here and in New York, she’s worked at ORNL and recently went to work at Ijams, while devoting all the effort she can to the new Holler Performing Arts Center.

Given that the best received events in the venue have been performances, that will be the focus under the new ownership and name. Recitals, chamber players, music shows of various genres and theatrical productions have all been very successful. Plans call for changes to the venue which will more perfectly align the design and facilities to these types of performances.

In an effort to promote local performing arts, the venue will be designed with an open concept to allow for greatest flexibility. The intention is to provide high quality performances to the community while making it accessible to all. Sara says the new configuration and facility will, “allow groups to produce works in ways they might not have been able to.” Further support of local performing arts groups is planned in the future, with training and help with marketing.

A series of phased changes are planned. The first phase will involve upgraded lighting and sound systems. An upgraded sound board will be installed and “black out” curtains will be placed over the front windows. A second stage will include building out the stage to include more traditional entrances and wings. A final phase calls for 85 elevated seats and a tech booth.

Having worked in the space, they understand its potential, feeling it is a great size and it has excellent sight lines needed for a performing arts center. Of the size, particularly, they said they feel it fits the current arts culture, which includes a number of smaller theatrical groups and other performing groups. They hope to be an incubator space for these groups. Hopefully some of them will grow out of the space as they get their footing and require larger venues.

The first production presented by the Holler Performing Arts Center will be a production of local writer, Katie Myers, work, “Margaret and the Wampus Cat.” The play won the recent Crow Flies Scriptworks competition, which is a southern regional playwrighting incubator. It will soon go into production and will be presented this fall.

The Knoxville Theatre Club is a 501(c)3 organization whose mission statement states,

Our mission is to thrill Knoxville crowds with singular, entertaining, and resonant theatre crafted by adept local artists; to provide world-class training in the techniques of modern stagecraft, and to develop resources focused on improving accessibility to the dramatic arts in our community.

The shift from Modern Studio to Holler Performing Arts Center becomes official June 1, with an Official Launch Party to fall on June 9. The Grand Opening will include numerous performances, food trucks, Alliance Beer and visual artists. Doors open at 6:30.