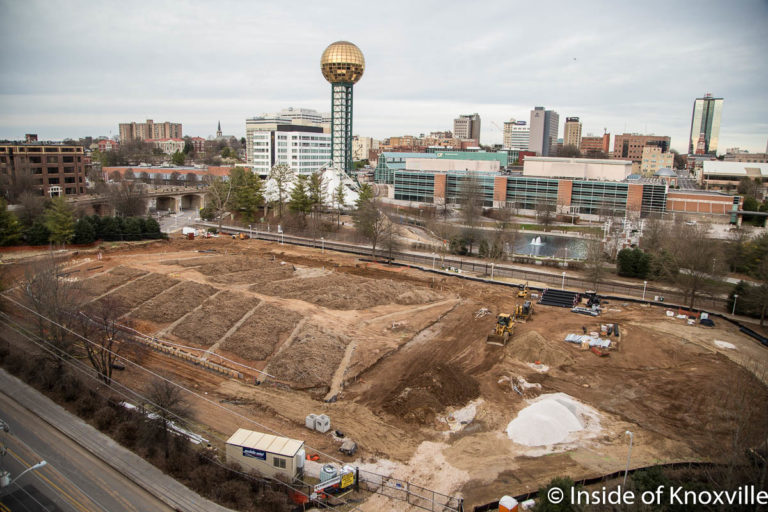 One of the fun things about doing what I do is that people are always running into me and saying, “Hey, quick question . . .” It leads to some of my favorite conversations. Often the person asking the question about a random downtown topic knows more than I know, but they assume I have a secret reservoir of information. For the most part, if you read this blog everyday, you know everything I know about what is going on.

That said, here’s a topic my friend Wes stopped me and asked yesterday, plus a couple of greatest hits – that is projects that I’ve been asked about probably as much as any others. The first topic is the World’s Fair Park Performance Lawn. Wes wanted to know what in the world was going on in a spot that doesn’t much resemble a lawn at this point.

It turns out the city feels it has been underutilized and they recognize that the site was problematic when it was used in the past. There wasn’t much in the way of lighting. There was no power or water which meant noisy generators and hoses criss-crossing about. If there was a light rain, the lawn was a mess, drainage virtually none existent.

Many of us have great memories of concerts and other events on that lawn. The shining star for entertainment was the 90s series, “Hot Summer Nights.” The talent that flowed through that series was stunning and the prices were very low. I think most of the shows I saw there were part of the series.

On the spot (that I can remember without digging through ticket archives, IE boxes), I recall seeing Sheryl Crow with a small opening act called Wilco, if memory serves. I saw John Fogerty, Old Crow Medicine Show (with the Felice Brothers and Justin Townes Earle!), John Fogerty, Santana, Ray Charles, the Neville Brothers, Al Green and Leon Russel. That’s a lot of legendary talent for one small grassy patch.

So the city has embarked on a $3 million, five-and-one-half month project to bring it back and make it much more practical as a festival and concert site. It will give the various groups mounting outdoor events another viable choice. We’re getting to the point that we must move some of the larger festivals and events out of the Market Square area. They’ve outgrown the space and we really no longer need large events to bring people downtown.

The project started in mid-January, so we’re already about two months in. The project includes “updated water and electrical service, improved lawn drainage system, and hardscape design and installation.” The funding is also intended to include a portable stage giving the space flexibility.

Designed by McCarty Holsaple McCarty, one of the major changes will be the hardscape, which will be permeable pavers surrounding the lawn. This hard surface will allow for trailers, buses and Food Trucks to enter the site and park. It will also demark a pedestrian flow around the perimeter of the site and will also improve handicap access.

A major drainage system is being installed to make the lawn usable in the wake of wet weather and the need for generators and lengths of water hoses will be removed. The improved lighting will make exiting the site easier and safer. The landscaping will not only improve the site aesthetically, but will also assist in keeping the lawn healthy.

The full site is five acres and the improvements are being overseen by the Public Building Authority. Judith Foltz, in the press release said the city expects the lawn to be read for use by the time for the Festival on the Fourth, in July.

And the two most common projects I’m asked about these days? Well, a clue is in the comment section on yesterday’s article in which a mention was made of a “Cajun/New Orleans restaurant in it but the project never came to fruition.” It’s funny about those projects that go silent for a long time – sometimes they didn’t happen and sometimes it just takes a long, long time. So, what is the reference in the comment?

It’s a reference to the plans first announced here in July of 2016! Anything that has been simmering that long must have burned up on the stove long ago, right? Well, not so much. Brien and Lisa Shirey, the couple with the dream, ran into major glitches along the way. The first contractor left the job and another was brought in. New plans had to be approved.

They didn’t sit idly by. Their plan was for the Clinch River Brewery to be both a brewery and a restaurant serving low country or New Orleans cuisine – that decision seemed to vacillate a bit. While the project in the Holston Building languished,they opened their brewery in Norris and have steadily built a good team and a good reputation for quality beer.

As things stand now, the project is moving forward more rapidly than it has in the last three years. Evidence is visible on the outside of the Holston and work is going strong on the inside. They have requested an extension on their permit to manufacture and sell beer. I hope to have more on this story in the near future.

The other project I get asked about often is one I never reported on. It was an exciting possibility for the space between Gallery Lofts (above Mast General Store) and the Century Building (think Chivo Taco). The space was once a grand bus terminal, Knoxville first Sears Department store and more. The building burned in the 1897 fire on Gay Street and was re-built, only to burn again in 1974. It has since been an empty lot, a gaping scar on Gay Street.

Fast forward to a couple of years ago and Hatcher Hill developed plans to make the building into an arcade housing a number of businesses and providing a connection to State Street. I was told recently by someone involved in the project that the plans required a Nashville-level budget, but could not be projected to deliver that kind of return. More costs and less profits make a project a no-go.

Hatcher Hill sold the property to a developer who intended to build a hotel on the spot, but then other hotels were announced and that must have looked less appealing. At this time, as far as I understand it, there is no active plan to build on the lot in the near future. That will change when the economics work, but we apparently aren’t there just yet.

I’ll end with a couple of random heads up: This weekend is a festival weekend for the St. Patrick’s Day Holiday. Expect some traffic and parking disruption. According to the city’s press release, “Festival-related no-parking zones go into effect at 1 p.m. Friday and continue through 10 p.m. Saturday on Market Street between Union and Clinch avenues and Union Avenue between Walnut and Gay streets. These roads will be closed to traffic Friday 3 – 10 p.m. and Saturday 9 a.m. – 10 p.m.”

Finally, there is a parade connected with all of the above. The parade starts at 1:00 PM but “Street parking along the parade route closes at 10:45 a.m. The parade steps off at 12:55 p.m. from Howard Baker Jr. Blvd, across from the Knoxville Civic Auditorium. Eastbound lanes of Howard Baker Jr. Blvd between Hall of Fame and Hill Avenue will be closed from 10:30 a.m. – 2:30 p.m. The following blocks along the parade route will be closed from 12:45 – 2 p.m.: E. Church Avenue to Gay Street; Gay Street between Cumberland and Depot avenues; Jackson Avenue between Gay and Patton streets.”

Another couple of events need a mention: This weekend is the third annual Women in Jazz Jam Festival. The kickoff is downtown at Alive After Five on Friday night, though the remainder will be played out at Knoxville Center Mall. Info and tickets at the link.

Finally, Dream Bikes is hosting a fun event in a couple of weeks and you need to buy tickets! 🙂 The fundraiser involves food, drink and entertainment all aboard the Three Rivers Rambler. It happens Thursday, March 28 from 6:00 to 9:30 and information may be found here.