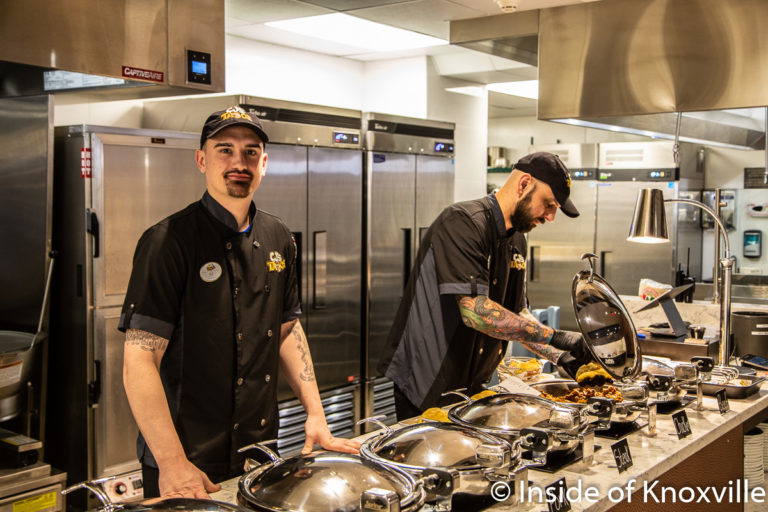 CJ’s Tacos, who many of you know from his taco tent or from Chris Jones’ food truck, has opened his first brick and mortar location inside Embassy Suites. A soft opening last weekend attracted lines as the word spread. He’s humbled and grateful for the journey he’s taken to get to this point.

Born in Indianapolis, Chris considers Saginaw, Michigan, where his family moved when he was eight, to be his hometown. He describes a family that didn’t have much, but his father loved to cook and “understood the balance of flavors.” Of the six children, it was Chris who learned culinary arts from his father.

Chris also spent a lot of time at his best friend’s house, ate supper there several days a week, and learned from his friend’s mom how to fry tortillas for the tacos they had once a week. In the lower income parts of the city, it was understood that tortillas would be fried.

After high school, where he starred in basketball, he attended Kirtland Community College and then Glen Oaks Community College where he played basketball on a scholarship. It was during his second year of college that his son was born, and Chris reached a turning point. A former high school coach asked him if he planned to play professional basketball. It was the first time he’d considered that, but being too short for the NBA, he would need to consider life after basketball.

When the mother of his child moved to Knoxville to be near her family, Chris made the decision to do the same so that he might better be a part of his son’s life. Arriving in Knoxville in 2015, he worked at food industry jobs, serving tables and managing restaurants. After a bit less than three years, he’d had it. He hated his job, had grown depressed, and he wanted more.

One night he knew he had to figure it out. He took out his laptop and started looking for ideas. He’d eaten tacos at a number of places around town but hadn’t seen a single fried tortilla. Having no money, he started thinking about the Tennessee Valley Fair and the food tents there. How do you get a tent and get set up? What are the regulations? He called Patricia Robledo with the City of Knoxville and Kevin Clark with the Knox County Health Department and asked them tons of questions.

He learned that a one-day tent at an event is not regulated. Two days or more requires a temporary Health Department permit. He bought a tent for $100 and a portable flat-top grill for $200. He bought a table and an Igloo. He borrowed about $5,000 to buy everything he needed, pay his fees, and set up at the Fair. He worked nearly twenty-four-hour days, stopping to rest his legs and close his eyes for an hour at a time. He recalls prepping all night with a dull chef’s knife.

Chris worked the full ten days of the Fair and earned back the $5,000. He’d brought 500 business cards and given them all out. Bookings had already come in for events. His tacos were loved and he was ready to rock. One of the people taking a card would become very important to his future. Alpesh Patel, current owner of Embassy Suites, had him provide sample tacos to Alpesh’s wife, who then hired him to cater their daughter’s birthday party.

Not long after, Alpesh asked what Chris’ goals were for his business and his future. They set a meeting for a week later to discuss the possibilities. The meeting resulted in Alpesh investing money and his organization (accounting, management) into CJ’s Tacos in exchange for a part ownership. The result was a truck and a trailer and everything needed for a first-rate food truck operation. By February 2018, it was in business.

The two set projections for the year and shattered them. They saw an additional 40% increase in profits in 2019. As they sat down at the end of the year to discuss the financials for the year and to make plans for 2020, Alpesh suggested the possibility of building a small take-out spot on the Gay Street side of Embassy Suites. When that proved problematic, the two turned to the large space on the mezzanine at the back of the lobby and everything clicked for the full restaurant you will see today.

You can still find the food truck out-and-about and Chris is very proud they won the Taco Showdown at Central Filling Station at 900 N. Central St. where you’ll find the truck each week. He says he will continue to work at the Fair because they love his tacos and helped launch him. “I’ll go back every year. They’ve been good to us and I love to do it. We do great and people look for CJ’s.”

In an unusual statement for a chef, he says his tacos are “not authentic.” By that he means, he isn’t trying to make traditional tacos of any culture, though people from California have told him they are reminded of California tacos. He says while they may not be authentic, “they are unique. It’s my version of what I think is good food. This is what I think a taco should taste like.”

To that end, I can give a bit of a testimonial. Urban Girl and I did some research for this article. She got two build-your-own tacos, and I got the pick three for $11.90. I chose the Asian Fusion, Buffalo Chicken, and CJ’s Original. Urban Girl said I could give her endorsement, and mine were some of the best tacos I’ve ever had. The winner, for me, was the CJ’s Original. We also loved the chips and guacamole.

Chris says he developed the menu sitting on his bed nearly two years ago and didn’t taste them until he opened. He makes the ingredients from scratch and makes his own seasoning and sauces. He wanted ingredients that make them different and feels he’s found that spot. He keeps it simple – six good tacos and nothing more.