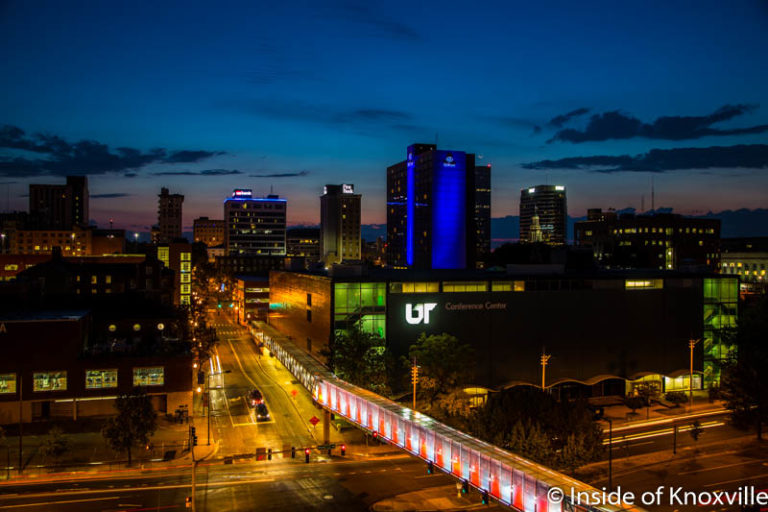 A friend and reader recently called my attention to some numbers and facts about downtown businesses that had been assembled by Downtown Knoxville Alliance (formerly CBID). I’m always looking for ways to frame what has happened in recent years with downtown businesses and living, and the Alliance has taken a look and gathered information from the last three years that gives a good overview of what has happened in business over that time frame. 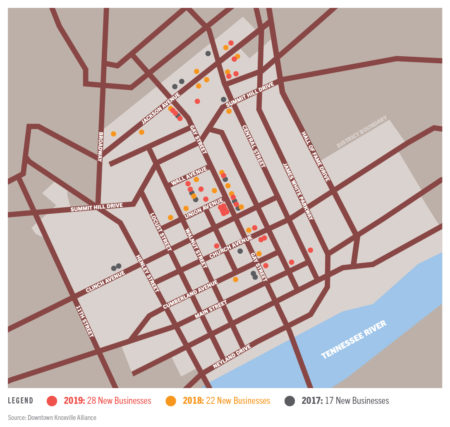 Of the other thirty, five were hotels, six were either fitness or entertainment venues, and a full nineteen were retail shops and service-oriented businesses. Given the current struggle of brick-and-mortar retail all across the country, to realize that nearly a third of our new businesses are either shops or services is an impressive record over that time. Some of the retail businesses that opened include handcrafted items (Jacks), a bank (First Century), a CBD store (Bluhen Botanicals), a high-end men’s clothing store (William and Wylie), a Spa (Wake Foot Sanctuary), a gallery (LAZ), two bridal shops (Lillian Ruth and Kindred), a wine store (Corks), a health shop (Eddie’s), a gift shop (Knoxville Soap and Candle), two ice cream shops (Cruze and Kilwins), and more. It’s quite a range.

You might wonder how many of those sixty-seven have closed in the three years looked at by the Alliance. The answer would appear to be three: Space Head, White Dog Gallery, and Exhale Old City Hookah. For a longer range look at the percentage of businesses that have closed in downtown Knoxville, last August I looked at the last nine years I’ve written this blog and tabulated the openings and closings and compared our closure rate to national rates. We compared well. You can find Part One here and Part Two here.

We’ve added 600 new hotel rooms during that time, and over 400 new residential units are under construction across Downtown Knoxville. It’s important to note that this includes only the area served by the Downtown Knoxville Alliance. It does not include the apartments built and being built across the river, for example. The new residential units under construction include units in the Cal Johnson Building (State Street), the Stockyard Lofts (Willow Avenue), the Overlook (West Hill Avenue), City House Town Homes (Vine Avenue), and the apartments at the former State Supreme Court site.

I write a good bit about development spreading in every direction from downtown, but it’s also true that downtown continues to do a significant amount of infill development and not every building in the immediate downtown area has been completely brought back into usage. While Market Square, Union Avenue, and the 400 block of Gay Street have gotten a lot of the love in recent years, twenty-three of the new businesses are located around the Old City. Another dozen or so are toward the south end of the downtown area. There is now reason to visit more than just one part of the city.

With more businesses located downtown than has been the case in at least fifty years, if not longer, and with more residents in downtown than likely even longer ago than that, it’s a great time to live or work in downtown. My wife and I have lived downtown for over a decade now, and I can’t imagine living anywhere else. It’s not for everyone, but if it suits you, there’s nothing better. I’ve included a video from the Downtown Knoxville Alliance, and they have a great section of their website devoted to downtown living.

You also have an opportunity to explore some downtown residences, coming up on May 2, when City People resumes their annual home tour. (If you live downtown and are interested in opening your home to the tour, send me an email at KnoxvilleUrbanGuy@gmail.com, and I can hook you up.)