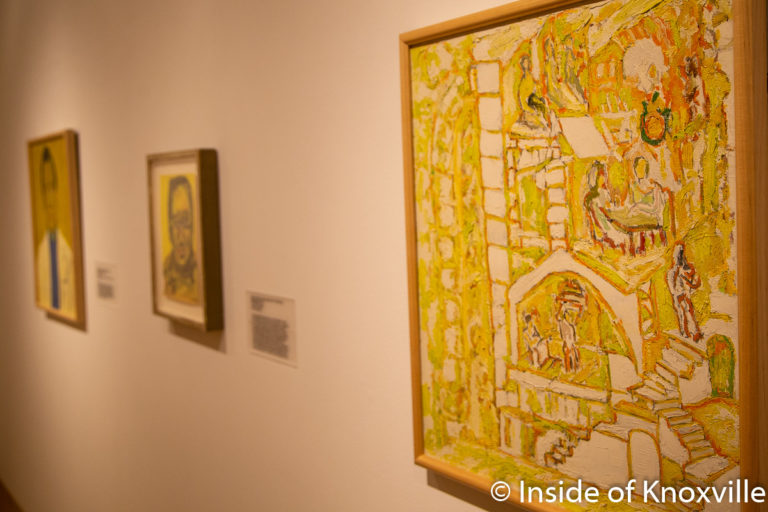 There are two must-see exhibitions currently open to the public in Knoxville centered around Beauford Delaney, James Baldwin, and the years after the civil war, leading up to recent history. “Beauford Delaney and James Baldwin: Through the Unusual Door” opened February 7 at the Knoxville Museum of Art and will remain in place through May 10. “Black and White: Knoxville in the Jim Crow Era” is currently exhibited at the East Tennessee History Center where it will remain until June 14.

The two are intended as companion pieces and offer context to each other. “Black and White: Knoxville in the Jim Crow Era” covers that period in Knoxville within the context of race. “Through the Unusual Door” focuses on the art of Beauford Delaney and his decades-long relationship with James Baldwin.

I suspect when we took Urban Girl to the exhibits earlier this week we probably would have served her better by viewing them in the opposite order. We started at the Museum of Art and then went to the “Black and White” exhibition later in the day. The context at “Black and White” would have possibly been helpful to her before seeing the art and also would have ended the day with a bit more lightness. Both exhibitions are heavy, but “Black and White” is very serious.

Both exhibitions boast an incredible amount of detail, and for someone intent on digesting the text, both require a significant amount of time. We spent about forty-five minutes in each, but were trying to move along because we had a ten-year-old in tow. I hope to return to each and take my time on a second view.

“Black and White” also includes references to artist Ruth Cobb Brice, a contemporary of Beauford Delaney and his brother the artist Joseph Delaney, who stayed in Knoxville while Beauford Delaney lived in Boston, New York and, ultimately, France. Knoxville’s unique history with race is covered in all its contradictions, from the fact that we had our first black city councilman in the years immediately following the civil war, to the racial tensions and false accusations that led to the Knoxville race riots in 1919.

The exhibition also doesn’t shy away from the damaging impact of urban renewal on the local African American community and the fact that much of the black community that would have been known to Beauford Delaney has been destroyed to build highways, the Knoxville Civic Coliseum, and more. One of the most chilling photographs, to me, was of a clan rally that took place to commemorate our country’s bicentennial in 1976.

“Through the Unusual Door” focuses on Beauford Delaney’s life after he left Knoxville. When he arrived in New York City, he landed in the middle of the Harlem Renaissance, becoming friends with many of the leading African American figures of the time, including James Baldwin. Struggling with being a black, gay man in the United States, Delaney ultimately joined others in his circle and moved to Paris. With each move his work became more complex, and in France he achieved some of the recognition that eluded him here.

The exhibition presents works from all periods of Delaney’s life, from his first known painting until those produced as he neared the end of his life. Increasingly abstract and beautifully textured, the scope of his work in this collection is truly captivating. It includes not only works owned by the museum, but a number on loan from public and private collections around the country.

An effort is underway to restore the Delaney home, and a fundraiser will be held at the Knoxville Museum of Art on April 16. Plans have also been announced for a Delaney Museum at the Beck Cultural Center. The groundbreaking for the museum is set for late spring. I can’t encourage you enough to explore these great exhibitions while you have a chance.