Current Construction on the North Side of Downtown 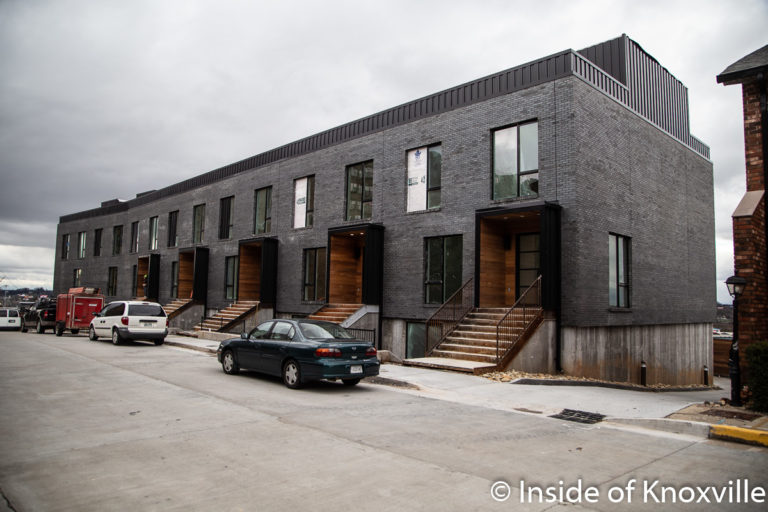 As promised last week when we took a tour of south side construction, today we’ll take a turn through the north end of downtown and look at some of the major construction there.

First up is the construction on top of the hill, a Hatcher-Hill a project I most recently wrote about here. With the completion of Ryan’s Row at 535 Vine Avenue, the townhomes at City House occupy a spot long intended for homes. A short thirty-three years after Kristopher Kendrick began development of townhomes in this area, Ryan’s Row extends the residential units along Vine Avenue.

The homes have roof-top decks, two-car garages, and other amenities hard to come by in an urban area. They also have commanding views of downtown and the Smoky Mountains to the south and Sharps Ridge to the north. In addition to the approximately 500 square feet of outdoor space allotted to each unit, owners will enjoy about 3,000 square feet of interior space, or about two-to-four times more than most homes in downtown Knoxville.

Just down the hill and a block to the north are the Jackson Avenue Ramps. Talked about for years, it seemed construction would never arrive. Once it did, the demolition moved very quickly. Crews are now working on the infrastructure that will go beneath the ramps. My observation on other projects is that this phase takes the longest and shows the least amount of obvious change.

After this phase, changes will be easily spotted, and the project will likely move much faster. The projected finish date is summer of 2021. The most recent information and much greater detail on the project may be found here.

To the west of this site, and visible from the Gay Street viaduct, is the much more massive and involved Broadway Viaduct replacement project. This project was discussed for well over a decade (or two?) and eventually became a joke. Until it wasn’t. Demolition began at about the same time as the Jackson Avenue Ramps, and the project also seems to be moving along rapidly, with most of the old viaduct gone.

That said, the project is much larger in scale and much more complex, given the rail tracks running through the site. The same company is working both projects and the projected completion date for this project is late summer of 2022. Details of this project may be found here.

Finally, Stockyard Lofts, located on Willow Avenue have gotten underway after considerable delay. First announced here (and described in detail) in July 2017, the 152 unit apartment building was originally set to have been completed last year. Instead, due to regulatory delays, the project didn’t get underway until late in 2019.

Original projections said the project could be completed within eighteen months of the beginning of construction, which would put the new completion date sometime in mid-2021. The stage that once sat in the space has been removed, the parking lot has been dug up and foundation work has begun. Recent rains formed a small lake in the depression dug for the foundation, which, ironically, is in a spot that used to be underwater for much of the year, according to Jack Neely’s recent book on Old City history.