Current Construction on the South Side of Downtown 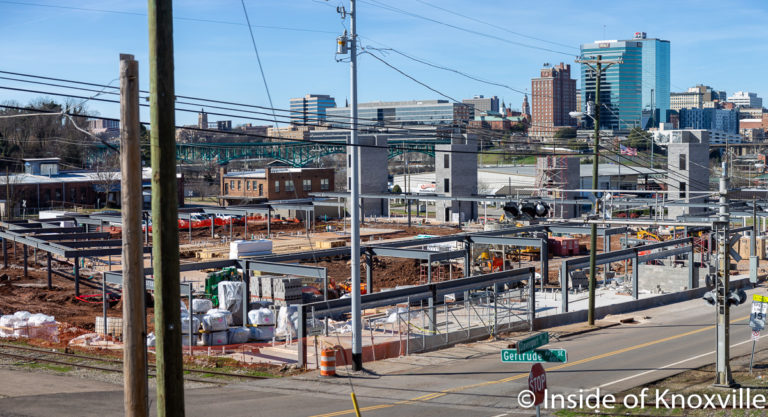 There is so much construction going on all around the downtown area that it’s easy to miss the progress and suddenly notice a new building has appeared. I took a walk around downtown and into South Knoxville to check on some of the projects underway and realized a lot had happened since I’d last tuned in. Today we’ll take a look at several of those projects.

First up is the new construction at 736 Sevier Avenue. The City South project, originally designed by SBL Investment Properties, is now operated by Dominion Group. Plans call for a three-story building with 120 apartments and 3,000 square feet of commercial space, most of which will be occupied by the headquarters of Conley Entertainment Group.

With the scale of the project now coming into view, it’s apparent how much the streetscape will be altered. The most recent information I have is that plans call for opening this summer, though that could have changed. You’ll find my original article with details about the project here.

Just down Sevier at Foggy Bottom Road, near the eastern entrance to Suttree Landing Park, Foggy Bottom Flats are quickly taking shape. The 1,100 square foot modern town homes are broken into two rows of buildings with seven units in each. The hope of having them occupied by the end of 2019 didn’t happen, but they seem to be moving rapidly in that direction. My original article about this project can be found here.

Just down the hill from the Foggy Bottom project, at the eastern edge of Suttree Landing Park, amenities have been added that I believe deserve a mention. The new pavilion includes tables with shelter and restrooms, both of which are welcome additions to the park. Nearby, the promised kayak docks await better weather. These small touches make the park even more inviting.

Back across the river, The Overlook on Hill Avenue is rapidly rising at last. It will soon be two years since the ten-unit luxury apartment development was announced here. Originally priced starting at around $600,000, eight of the ten units have been sold.

Finally, for today, I’ve included photographs from the Supreme Court site in which a significant portion of a block that has been surface parking for a generation is being converted to apartments, and the original Supreme Court site is being developed as a short-term stay hotel. Despite the recent rainy weather, the parking lot has been removed and site preparation for the underground level of parking has begun. You can see the plans here.

There are other projects, of course. Not pictured here are the apartments springing up on the ridge behind the Kerns building on Chapman Highway. Additionally, there are several projects on the north end of downtown which I’ll cover in an article next week.