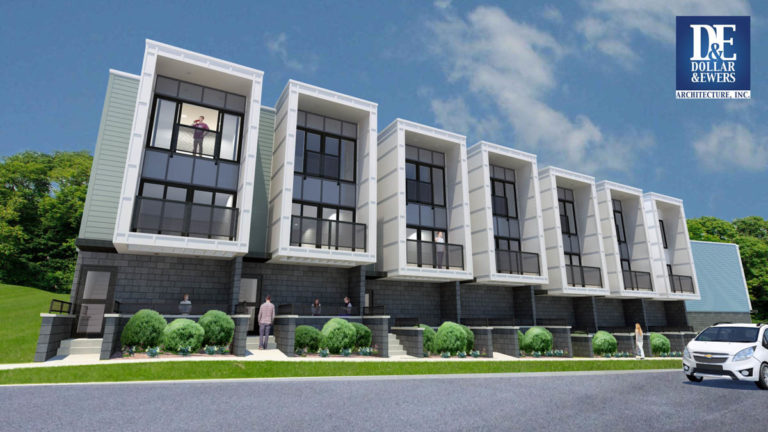 Rendering of inside Foggy Bottom Flats, Courtesy of Dollar and Ewers Architecture

Brett explained that he’d had a vision of this sort of project twelve years ago and identified property in north Knoxville for the construction. He completed drawings then, got variances and an agreement for a loan from a bank. That agreement was withdrawn as the housing crisis struck and the project became dormant.

In 2014 he began looking in south Knoxville for a suitable property. He found what he was looking for at the current location of Landing House. After purchasing the property, he learned that Zach and Hao Land had attempted to buy it for their restaurant and decided the front half was better suite for them. He had the land subdivided and sold them the front half.

At that point, breweries began opening quickly and Brett was enlisted to help with the development of several of those buildings, putting his plans for this property on the back burner. More recently, as it became more of a priority, Brett met Brian Simmons who stuck his head into Brett’s office on Sevier Avenue and asked if Brett knew of any nearby office space. Brett offered to share space and Brian accepted. Based on Brian’s background in housing and finance, Brett offered him a partnership in the project.

As the project grew in scope, Brett asked Dollar and Ewers to join. Brian became the lead architect and his brother Tim became an investor. After a conversation with Garry at Suttree’s in which he told Brett he was looking for an investment opportunity, he was invited to join.

Maryville’s Renaissance Bank agreed to loan money for the project through Three Roots Capitol and a CDFI (Community Development Financial Institutions) loan. CDFIs invest in locations that have been identified as a Designated Development Area. Reagan Design and Construction came aboard and the $1.75 million project got underway.

Foggy Bottoms Flats will be constructed directly behind Landing House and will consist of two buildings, each containing seven townhouse apartments. Earth has already  been moved and construction will start right away.

Each will have a garage at ground level, an open plan living/dining/kitchen space on the second floor and two bedrooms and two baths on the top. Outdoor space will also be abundant, with a patio on the ground floor, a balcony on the second and doors opening onto a Juliet balcony on the top floor. Each unit should have a view of the Tennessee River.

NAI will manage the property, from pre-leasing to leasing and beyond. The group hopes to have pre-leases available in the fall and have the units ready for occupancy by the end of the year. Pricing for the 1100 square foot units will be announced later.

With the coming redesign of the intersection of Foggy Bottom and Sevier Avenue into a roundabout and improvements to Foggy Bottom, the area will become more walkable with immediate access to Landing House, Alliance Brewing, South Coast Pizza and a host of other businesses, as well as Suttree Landing Park just a block away. Connections to the Urban Wilderness are also nearby.