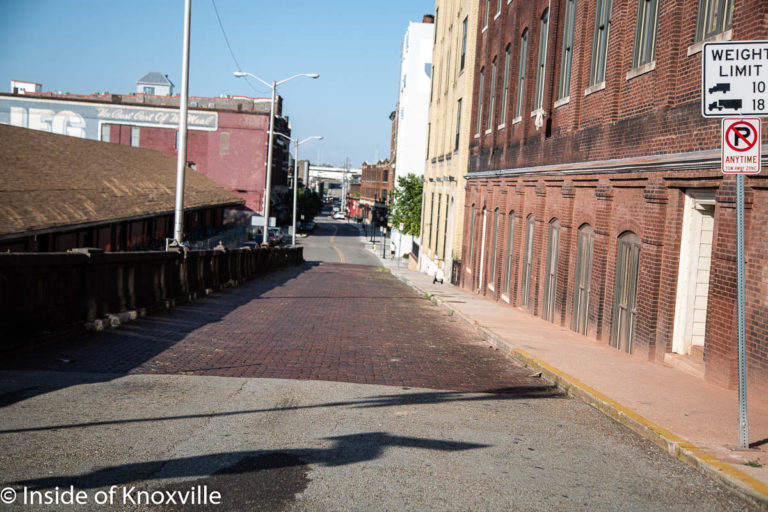 The journey toward a new ramp has been a long one, with the first meeting to discuss the replacement held in 2006. The current design received approval from the Federal Highway Commission in 2015. It is on the National Register of Historic Places and in the historic Warehouse District and each of these carry particular restrictions and guidelines for alterations, repairs or reconstruction regarding size, massing, scale, materials and more.

The primary feature about which some have been concerned, is the historic brick. They will be preserved and some will be used in the new construction, but it will include fewer than the current configuration. The bricks which are used will be flipped over to allow the unworn side to form the surface at the entry of the ramp on each end. The engineering company has already experimented with removing them and learned that they are a foot thick. Unused brick will be saved and may return as a feature beneath the ramp.

The first phase will be demolition and pains are being taken not to damage the connected buildings. Once rebuilt, the bridge will not connect to the buildings, maintaining about an inch gap. Construction will generally be limited to Monday through Friday from 7:00 AM to 7:00 PM, though exceptions may be made for less disruptive work.

One interesting aspect of the conversation involved the underside of the ramps. Initially, it will be enclosed, much as it is now. The construction, however, is being completed with the idea that the space below the ramp will eventually be public space, with access to small portions of the original level of Gay Street, or what has been called “Underground Knoxville.”

The first step will be to assess all the structures. Following an assessment to determine any additional vulnerabilities, the portion of the ramp closest to the buildings will be removed by sawing a portion at a time and removing it. Once this portion has been removed and the bridge is no longer connected to the buildings, a machine that “looks like a dinosaur with an open mouth will eat the remainder of the steel and concrete.”

Beginning in November and going through February, the foundation will be laid for the new ramp. According to the construction company, during this phase it may appear little is being done though, of course, it is a critical step. In March the real construction starts and progress will quickly become apparent. It will continue to completion in September of 2020. Once finished, the ramp will, once more, include a sidewalk and a modern version of the ornamental lighting found in the Old City will line the ramp.

More information may be found here. Anticipate updates from the city to be posted at this site throughout the duration of the project.