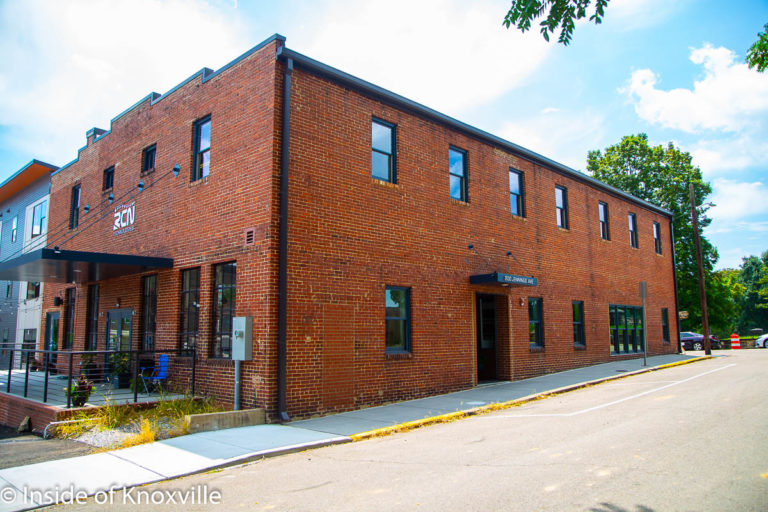 200 Jennings Avenue, just across from the Old Gray and Knoxville’s National Cemetery has a long history stretching back almost 100 years. Jack Neely, in a history of the building says the best evidence indicates it was probably “built by the Knoxville Gas Company around the mid-1920s.” They left in 1958 and the building subsequently housed, auto-repair, AC, medical supply, pipes and fittings, electric services and textile businesses. It eventually came into the possession of the current group of owners who also own the adjacent new apartment development.

The building was renovated by Conversion Properties with design priorities set by long-term lessees Geoff and Jennifer Yearack, co-owners of RCN Technologies in conjunction with Farris Eid and DIA Architects. Financing was provided by the Bank of Tennessee. That the Yearacks would house a technology business in this location may be the least likely of all the generations of ownership in the building.

Designed to foster openness, the interior features a combination of rustic and modern design. From the kitchen to the presentation area, standing and moving about is encouraged. The comfortable tone set for the company is embodied in the four beer taps (they started with two and expanded) available near one of the two kitchens. A large room on the top floor is utilized for “town hall” meetings in which employees are encouraged to ask or discuss anything on their minds.

The couple has been together for twenty-five years and have started a total of six companies, four of which have been joint ventures. They have two sons and a daughter and the name of the company includes the first initial of each. They are from the same small town outside Los Angeles and attended the same high school, but started dating in their early twenties.

Geoff worked for a furniture company that moved him to Arizona, back to California and then to Las Vegas, Nevada. When they wanted to move him from there, he decided to leave the company. The couple had a new baby and decided to put down roots. Geoff started and built a window covering and shutter business which he then sold. He then opened a floor covering business, which was work his parents had done. He built it to over 800 employees and sold it.

“I learned on each business what I didn’t like. I like a culture where I enjoy going to work. With the current business we decided we wouldn’t hire anyone we wouldn’t want to have to the house.” He said he felt if they did this the employees would get along well and evidence indicates this is true: Three employees are getting married this year and each of them will have other employees in their weddings.

After selling the flooring business, he began building and selling houses in Las Vegas. When the housing crisis hit the nation in 2008, the company closed. The couple decided to move the family back to California where Geoff began to research recession-proof businesses. What he learned was that technology companies are in high demand during downturns because companies outsource, rather than hiring. In good economies, companies can’t hire enough employees, so they outsource technology. He decided to develop a technology company.

They grew the technology company rapidly, primarily with one large customer and sold it. They had also decided they did not want to finish raising their children in California. Friends from their Las Vegas days had moved to Tennessee and encouraged them to look at Knoxville. They planned to move to a coastal city and had their eye on Charleston. A weekend stop-over in Knoxville changed Geoff’s mind and he suggested that Jennifer visit. When she visited, she rented a house immediately.

Upon arrival, they started their current technology company in the basement of their home on Chert Pit Road before moving to Farragut to get a larger basement. The company focuses on managed service practice (managing all technology for companies) and Internet Failover or Internet Continuity, keeping companies operating when they have internet outages. They do not manufacture devices, work with manufacturers to insert their own programming, or as Geoff puts it, “We add the human element. We tell the hardware what to do and then manage it.” They are preparing to move into the 5G arena.

Their fastest growing sector is public safety. They serve over 200 police departments nation-wide, providing the secure mobile hotspot in their cars that operate computers and body-cams. They’ve worked with Cradlepoint to provide internet connectivity to about 3000 ATMs in the last twelve months. They currently have twenty-eight employees. Most are here, but two are in Boise, Idaho, two just outside Milwaukee and one is in Oklahoma City. They plan to expand to other parts of the country and about 20% of their business comes from the New York/New Jersey area.

The decision to move the company downtown was born out of a difficulty recruiting interns from UT and employees. The business had grown into a building outside Farragut and they were told by UT professors and others that the recruiting problem stemmed from being located outside downtown. They made the move, temporarily housing the company on Gay Street before moving the operation to 200 Jennings last winter. Geoff and Jennifer also realized they wanted to live downtown and moved here about the same time.

The company is a young-person’s game and Geoff says the average employee is twenty-nine-years-old. Two of their three children work in the company and his daughter, who was sixteen at the time, was the third employee hired. He says the couple considers this their legacy company and plan to grow it into the future, giving Knoxville another quiet, but growing, presence in the technology arena.