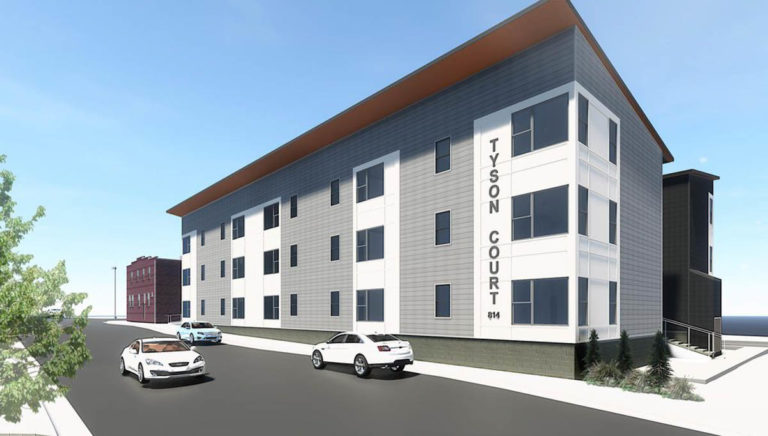 It’s been five years since I started noticing this cool little area settled somewhere between downtown proper and north Knoxville. I wrote about an event at Ironwood studios in 2014 and about a cool building and interesting downtown icon who owns it later that year.

At the time, this area was brimming with potential, but not much else. That cool building now has Remedy Coffee and Paysan Bakery and, as the map below shows, the apartments now being built there are in the center of many of our best new businesses.

Tyson Court is new construction of a thirty unit apartment complex being developed by Conversion Properties. Located on a small, previously vacant lot, the site presented challenges for placing an adequate number of units on the spot to make the project financially feasible and for providing parking.

The solution was to retain a space on the Jennings Street side of the development for parking and to construct two buildings with the primary entrances to the units between them. Design Innovation Architects and Faris Eid designed the project and TDH Construction is the builder. Financing, in partnership with the City’s PILOT program, is provided by Bank of Tennessee and lender Tommy Schmid about whom Daniel spoke very highly.

The thirty units, which include 48 beds (either bedrooms or space for beds in studios) include studio and one and two bedroom units. Daniel Odle with Conversion says that when the units were made available for pre-lease a few weeks ago, that he was surprised to find the studio and one bedroom units taken first. They were completely taken within the first two weeks of leasing. At this time, fifteen units are leased and fifteen two bedroom units remain.

Orientation of the units with their entrances toward the center allowed for large windows to be placed in living areas looking out onto Old Gray cemetery with its attractive monuments and beautiful dogwood and magnolia trees. St. John’s Lutheran Church is also visible from some of the units, while those on the north side face a more gritty urban terrain. While retail or restaurant space was considered, the developers did not feel the area would sustain it at this time beyond, perhaps, a coffee shop and they didn’t want to compete with Remedy.

Daniel said the intention was to build units in a cool area that is less expensive than the heart of downtown, but which provides great accessibility to various urban attractions. The result is the ability to offer rent in a new development which is lower priced than the center of downtown. The studio units went for $650, one bedroom for $875 and the two bedroom units currently available range from $1250 to $1450.

The units will have some upgraded finishes, like quartz counter tops, stainless appliances and washers and dryers provided in each unit. Daniel said the attempt is to make an urban contemporary design for the apartments that will fit with the downtown/north Knoxville neighborhood. The entire building is wired for high speed internet and parking is also available. An exterior courtyard with picnic tables and landscaping will be built once construction of the building is complete.

The city provided a thirteen year PILOT, which Daniel noted made the project financially possible. The neighborhood, he acknowledged has had to deal with some inconvenience during the construction and the company has tried to help minimize the impact where possible and work with nearby businesses.

The end result, of course, will be that somewhere between thirty and sixty new customers will live in the neighborhood, which should help everyone. New residents are being given gift cards to nearby businesses in order to introduce them to the businesses as they move in. Daniel hopes it will serve as an anchor for further residential development in the area.

The expectation is for the apartments to be completed by the end of August, with residents set to move in beginning in September. If you are interested in leasing one of the units, contact Andrew Wilmoth at 865-246-1331, extension 108 or email him at awilmoth@conversionprop.com.

I’d like to express my appreciation to the readers of Blank Newspaper. Once again this year in their Knoxville’s Finest edition, InsideofKnoxville.com was voted best “Local Website,” and the Inside of Knoxville’s Facebook Page was voted best “Local Facebook Page.” The category which may make me most happy is the one I didn’t win: Best Writer. The two people I share the spot with are two of my favorite writers and humans: First place went deservedly to Jack Neely and I am honored to be considered in the same breath with him and with Wayne Bledsoe with whom I tied for second place. If you don’t know Blank Newspaper, pick up a copy of their monthly newspaper or check out the website.