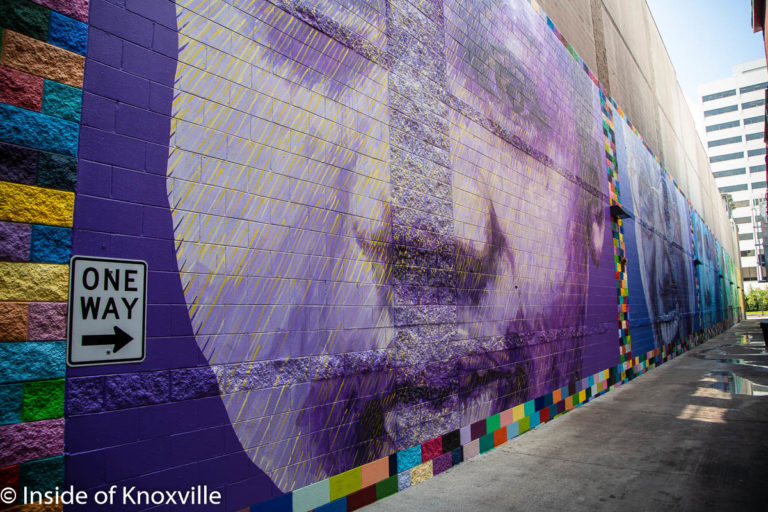 Artist Addison Karl has completed his mural, “Cassiopeia,” on the surface of the Market Square Garage facing the Square. Karl was selected by the Arts and Culture Alliance and the Knoxville City Council approved $150,000 for the work. He brought in a team of artists and hired local artists to help him complete the massive work.

“Cassiopeia” is the name of the Greek goddess who gave birth to Andromeda. Beautiful, but vain, she was turned into a constellation, which is how she is best known today. His other murals, of which he says there are about seventy-five, are often similarly named. They are found all over the world and a number may be seen on the artist’s website.

The faces in the mural are of east Tennesseeans that Karl identified while in Knoxville planning the mural. He took dozens of photographs before narrowing the list to ten and then the six you see represented on the wall in varying color palettes. Each are composed with streaks of color building to reveal the faces.

I wondered if one massive work could rival the multifaceted smaller paintings on the other side of Market Square. After spending some time there, I think it’s possible. It’s a very different experience and one that evolves with the viewing. I didn’t immediately see the faces and found them to be much more clear through the lens of my camera. It’s often the opposite.

Photographing the entire work isn’t possible given the size and narrowness of the alley. Notice the photograph of the two young women who posed for conveyance of scale. It’s definitely best explored in person and I expect crowds to be doing that this weekend, the first weekend after its completion.

Murals have proven to be a popular local attraction, particularly, though not necessarily in alleys. It’s a goal that Mr. Karl says he shares: to help people see their context in a fresh way. Stop by and see if that’s not the case in this particular alley. It’s probably about time someone started giving mural tours and I wouldn’t be surprised to see it happen.

Check it out. (But DO NOT park your car there! Bad things apparently will happen!)