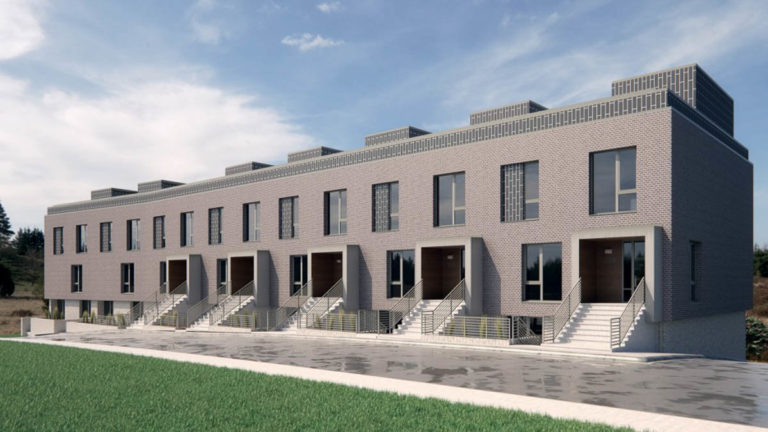 It’s been three-and-one-half years since I first wrote about Hatcher-Hill’s plans to build row homes on Vine Avenue at one of the highest points downtown. Since then a lot has changed while very little has changed. In July of 2015, the homes were set to begin construction right away. For various reasons, the start was delayed and the project seemed in jeopardy in subsequent months.

In an update a year ago, ground had been broken and the project was back on track. The design remained consistent with the initial vision and the developers pointed toward a mid-2019 completion date. I spoke to Tim Hill who confirmed the project is on pace to finish on schedule, sometime around June or July. Construction is now “in the dry,” meaning weather will not appreciably impact the schedule going forward.

Michael Davis of Sanders Pace Architecture described them at the time:

Each of the units is approximately 2,900 SF with a two car garage. They will be 4 bedroom, 3.5 bath units. Five (5) of the units feature brownstone style stoops leading up to the main entry. The remaining two (2) units on the west side of the building adapt to the sloping topography by shifting the main entry to the ground floor level. The primary material of the building is brick. Other exterior materials include board form concrete foundation walls, black metal accent panels, and warm wood accents with large aluminum clad operable residential wood windows.

The description largely holds. Now named City House, the homes actually offer about 3,000 square feet of interior space, a private courtyard and balcony and an additional 500 square feet outdoor space on a rooftop patio, from which 360 views covering Sharpe’s Ridge to House Mountain, the city skyline and the Smoky Mountains to the University of Tennessee will be found. Elevators are optional and would make the homes a more viable option for aging residents.

Obviously, with that much space and amenities like garages and elevators, these homes will be offered at a premium. Tim Hill says they will likely land around $1,000,000, which is little surprise to anyone watching downtown housing prices. In a current environment in which Gay Street condos are going for over $400 per square foot, these are coming in at around $330, which is expensive, but “expensive” is relative. While they may cost more than most, they are not out of line with current prices.

For anyone interested in looking further, the website has more information. You can, of course, drive or walk by and take a look at 603 Vine Avenue or call (865) 249.8132.