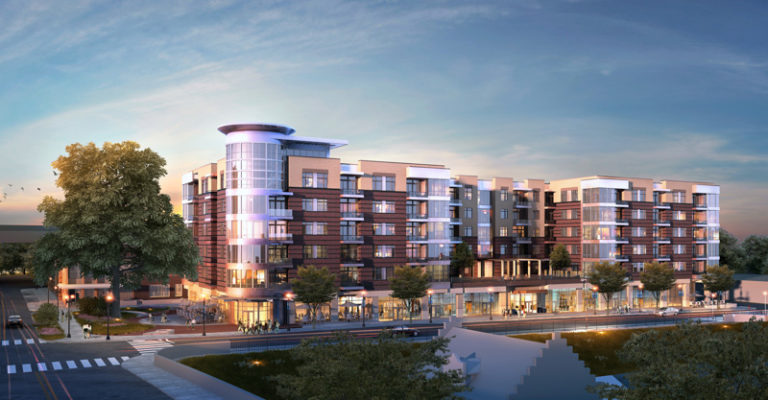 Between the bone-chilling cold we had a few weeks ago and the seemingly constant rain we’ve had since, you may not have noticed that construction is continuing on several projects we’ve discussed on this website. I took a walk around downtown and spoke to a few of the developers working on the projects in order to give you a look and updates where possible.

We’ll look first at Regas Square, one of the high profile projects sprinkled around downtown. It’s been over two years since I first announced the major project. When finished, it will feature one hundred condos, underground parking and multiple retail spaces.

I asked Joe Petre, with Conversion Properties, and one of the developers for an update:

. . . We have poured the last concrete for the retail and parking garage as of today and we have started the metal framing for the residential condos. The framing will accelerate now and we are expecting to be finished near the end of this year.  Our views are even better than expected now that we can walk on the second and third floors. I was able to see Mt LeConte from our third floor the other day just over the Depot. Really excited about that.

So, for a project that struggled to progress through an early period which was also very wet, the basic structure is rapidly rising and there should be fewer reasons for delay. These projects nearly always take long than hoped and this one is no exception, running about a year behind the hoped-for schedule I first wrote. For a project this size, that doesn’t seem like much of a time overrun.

The project will dramatically change that portion of downtown, making that end of Gay Street a major residential hub, but it will not be the only project to impact the population of the area. The Mews II being developed by Jeffrey Nash, which I first announced only last fall, has already broken ground and is under way.

It represents the first ground-up construction for Nash’s Courtland Group and will add another twenty condos just a block away from the hundred being added by the Regas Square project. Add to that the retail included in this project, and the impact on the area of the two projects becomes clear. There are also ten units in The Mews, which were immediately filled when completed, sitting just across the street from Mews II.

Move a bit toward the core of downtown and you’ll find a project that I first detailed in July 2015, soon-to-be three years ago. The Vine Avenue Rowhouses were slated to begin construction that fall. They represent another ground-up construction, this time by Hatcher Hill. It’s a smaller project, adding seven new homes to downtown and original plans would have had it completed by now.

Delays and uncertainty changed those plans considerably, but evidence of construction has now appeared on the hill overlooking the city. When completed, the homes will be different from anything downtown, with, “two car garages, green roofs, and roof top decks. 3,000 square feet per unit,” according to  Tim Hill. Noting that John Sanders is the architect, he added, “We hope to be completed by Spring of 2019.”

These projects represent some of the more interesting projects currently underway downtown and, together should add about 126 new homes to downtown in late 2018 and into 2019. Of course, there are other significant projects underway and we’ll look at some of those soon.