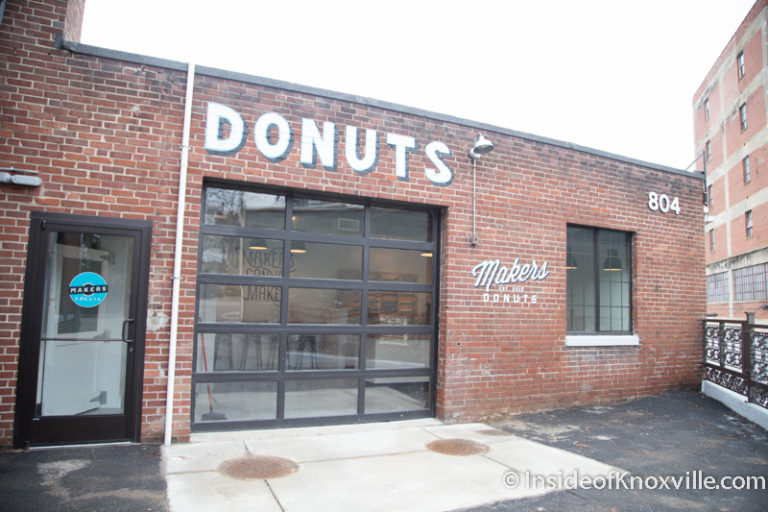 A simple message on the Makers Donuts Facebook page caught my attention a few days ago:

Hey friends! Big announcement…Sara and I are offering Makers Donuts for sale (the business, not the building). We’re looking to sell it to a passionate, full-time owner who loves donuts and loves Knoxville. Please message me or send me an email (alsobrooks@gmail.com) if you’d like more details.

It surprised me and it raised the question of whether the business might close or if the recently announced deal to join with Embassy Suites for a second location was still in the works, or had been dropped. Many sad and surprised reactions followed the post.

I contacted Sara Alsobrooks, co-owner with Sean, and talked to her about the proposed sale. She said it was simply motivated out of knowing what they do best. “We love starting things, being pioneers, going for it and branding.”

She pointed out that they have done this with a series of projects. They started Knox Life Church and moved it from a small room in the Old City to the Bijou where it grew to be a very large group, and then they stepped away. They started Kanvess, operated it for two years and then sold it. They also sold Remedy Coffee last fall.

She said they know they are better at starting things than at growing them and evolving them and, while they thought Makers might be different, they decided it really wasn’t. The day-to-day, long-term operation of business simply isn’t where they get their energy.

So, at the end of year two, they want to find someone whose passion is growing a business that has already proven successful. She said that both Remedy and Makers have done great. Makers, she said, “has new chapters, but that doesn’t mean it’s for us. Our season is starting things.”

Of a business or building’s potential, she says Sean has an ability to, “see it,” as he did the first time he walked into the building the two businesses occupy. From that point, like with their other projects, she said, “Knoxville has been so good to us. It supports dreamers.”

She says it is likely they will be involved in something new, though nothing is ready to be announced. She echoed the statement above, saying, “We want a new owner with a heart for the city.” And of the deal with Embassy Suites, she said it is still there for the new owners to pursue. If you are interested in inquiring about the possibility of purchasing the business contact them at alsobrooks@gmail.com.