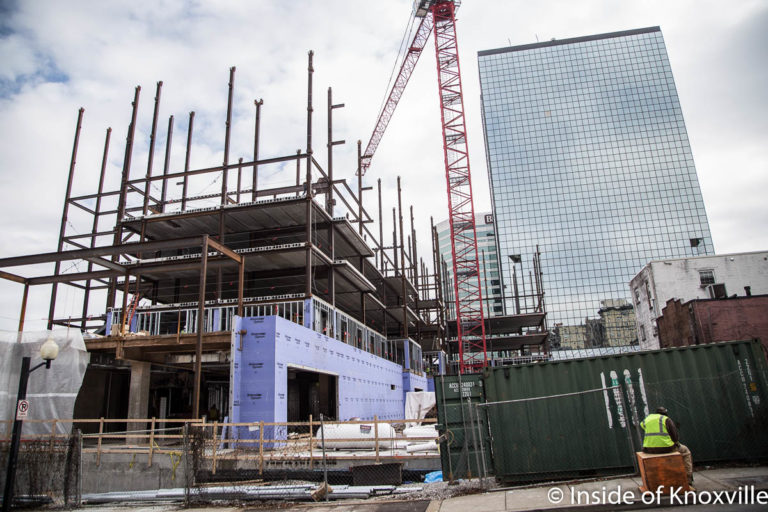 Courtyard and Residence Inn by Marriott, Church and State, Knoxville, February 2018
There seemed to be enough interest in yesterday’s photographs and updates regarding current and planned construction to warrant another pass at it, don’t you think? Interest is great and there are so many projects that following that alone could be a full time job. So, let’s look at a few additional projects with photos and updates where possible.
The Tombras Building (KUB Building for OGs), which I first profiled here is nearing completion. As Ian noted in yesterday’s comments, the fencing (much to the relief of everyone who uses that sidewalk) has finally come down. Some of the workers moved into new offices this week. I hope to have a more thorough look at the cool new building very soon, but I have to say, the corner is definitely more attractive than it has been in at least a generation. Get by to see it, if you haven’t.
Just down the hill, but rising to new heights, is the Marriott Courtyard and Residence Inn which I first profiled nearly two years ago. The land was first purchased for the hotel in 2012, which shows how slowly some of these projects can move. The project grew to be nine stories tall, including 232 rooms and a three floor, mostly underground parking garage. It’s been an exciting project to follow and it is definitely reaching upward at this point. It will change the skyline just a bit and be very visible from Gay Street.
I spoke with project manager Rick Blackburn to get an idea of the pacing of the project. The timeline is more ambitious than I would have assumed. He said to expect a fourth quarter opening this year, with specific dates to follow. That would make it the second major hotel opening in approximately a year in the downtown market. Rick is also the site manager of the Embassy Suites and he says the timing of the Embassy suites is till uncertain, but demolition is proceeding very well.
Finally, I contacted Daniel Smith regarding his (along with partners) two projects in the Old City. The first I reported on over two years ago and updated here, is the Crozier, a nineteen condo development with 6,500 square feet of retail facing the street and another 2,500 in the basement.
The news here is much more immediate, with a projected completion date of June 1st. Daniel says, “Ten of the nineteen condos are under contract.  We have sold the top floor.  We have 2 condos available on the fourth floor, one two bedroom and a one bedroom.  We have 3 units left on the third floor, all two bedrooms.  And we have four units left on the second floor, all two bedrooms.” They hope to sell the remaining eight two-bedrooms and one bedroom by the time the project is finished.
He continued, “Regarding Crozier’s Retail Space, we have 6,500 square feet available with 14′ high ceilings to the bottom of the trusses, and tons of storefront glass on the main level.  Additionally we have a really neat 2,500 SF space with 10′ ceilings in the basement that has access to the stair that comes out on Central Street (it also accesses the retail space from within).”
The group has also planned in advance to make the place flexible: “We will also have two kitchen exhaust ducts that could be utilized by restaurant tenant(s).  Additionally, the space has a flexible design such that it could serve one user, or be (divided) into four separate spaces. Interest in the retail has started to pick up now that the brick is going up and spring is on the horizon.  We have not leased to anyone yet; and believe in patience and the importance of getting the right fit.”
Finally, I asked him about Stockyard Lofts and he told me, “Plans were submitted a few weeks ago and we are in the process of obtaining a permit. We will have 152 residential units and close to 5,000 SF of retail space on the ground floor.  There is structured parking below grade and on part of the main level.  We also have about 5,000 SF of leasing and amenity space (lounge, workout facility, etc.) in addition to a pool and deck above the structured parking.”
The completion date on that project is yet-to-be-determined, but, in combination, the two projects will add another 171 residential units to the Old City. Additionally, completely filled office space in the Tombras Building which, as the former KUB Building, sat empty for years, plus 232 new hotel rooms on Church and another 176 hotel rooms coming in the Embassy Suites, and retail in the Crozier and Embassy Suites all equals a major impact for the city.
And that’s not all of it. More development news and more detailed information on other current projects coming soon.
Ed. Note: Be sure to join me this Sunday at 10:00 AM for KnoxCentric on WUTK, 90.3 FM (streamed at http:www.wutkradio.com) when my guests will include Gina Truit and Rachel Geren talking about the upcoming Whiskey Festival in the Old City and Madison Bankston and Victor Agreda, Jr. discussing the Friends of Literacy Bachelor Auction. You can also listen to previous broadcasts via the “Radio Show Podcasts,” link at the top of this page.