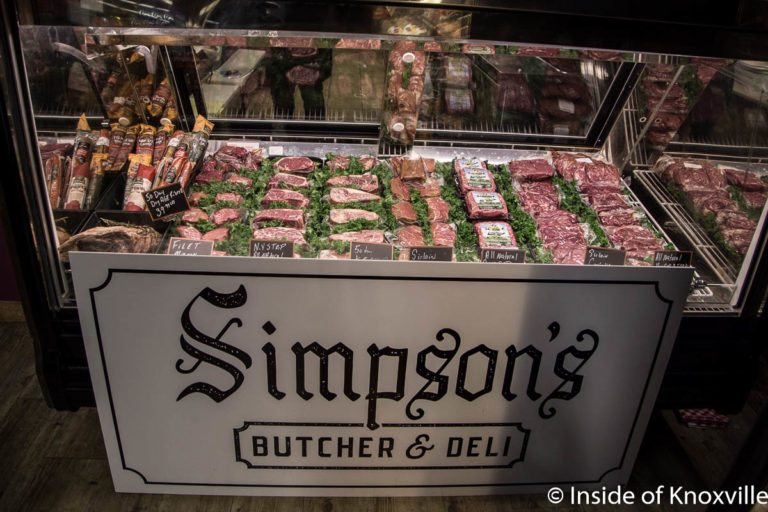 A butcher and deli shop has opened at 504 South Gay Street in the rear of The Market at the intersection of Union and Gay Street. Simpson’s Butcher and Deli is a partnership run by Ashley Gaylor. He opened in December and says lunch business has been great, but he’s looking to expand beef and cheese sales.

The meat is all-natural which, as he explained, can mean everything or nothing. The meat he offers is hormone and antibiotic-free from birth to harvest. The farm raises its beef and pork and takes it to harvest, so it controls the whole process on a series of farms across the state.

He points out that cattle remain on one farm and are thus free from the stress most animals endure being transported and placed in lots. He also offers grass-fed beef and plans to offer chicken raised to the same standards. A large percentage of the beef is dry-aged.

In a separate counter just around the corner from the more visible beeff, he has a case of Boars Head cheeses, hams and turkey meat. It was to be refilled after I visited, so I wasn’t able to photograph the entire selection, but there was a good variety of cheese, as well as the meat.

So far, deli sales have been good for lunch, though he also offers breakfast burritos and other morning foods. He uses the same products to make his sandwiches and wraps that he offers in the meat and cheese case. He says the deli works well with the meat counter to ensure that waste is minimized while offering the best quality ingredients on the sandwiches.

Another option is ready-to-go foods that he’s prepared from scratch and placed in the main cooler for the Market, making them available anytime the Market is open. I grabbed some chicken salad and the package was gone quickly once I got it home. It was as good as I could hope for chicken salad to be and made for a $6 dinner for two (along with some cheese and wine, of course). We also bought a couple of steaks to enjoy soon.

For now, his hours are 8:00 AM to 3:00 PM. He recognizes that people who live downtown and work outside the city will have a hard time shopping for meat during those hours, so he plans to extend the hours this spring. Support them if you’d like to keep this kind of business downtown.

You can follow them on Facebook and Instagram. And for good measure, here’s a little about great-granddad (read about him here if you ain’t from around here):