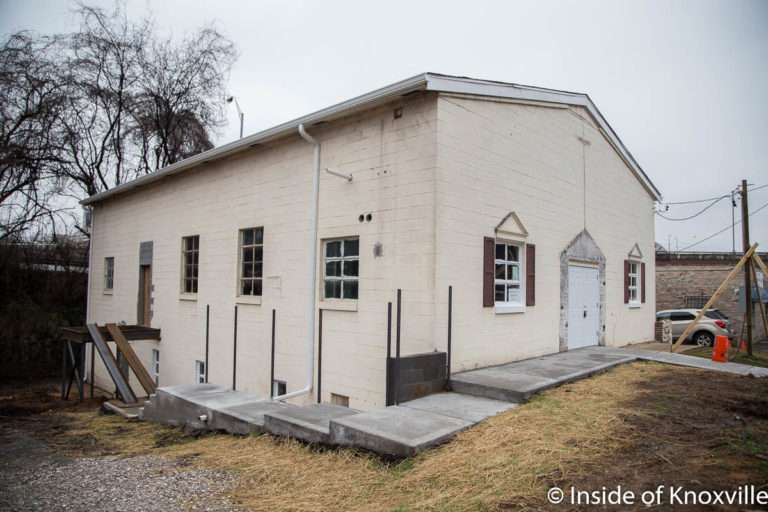 It’s been just over three months since the announcement that Theatre Knoxville Downtown would move from their long-term location at 319 North Gay Street to 800 South Central on the other end of downtown. It’s been a busy three months, with ongoing productions, including their just-concluded production of On Golden Pond.

They’ve put further productions on hold to focus on construction of their new theater and will open it with a production of One Slight Hitch beginning April 5. The new capacity will be about 100, roughly twice the seating currently available. And the new HVAC systems being installed will make the theater-going experience much more comfortable than in the past.

Work is well underway to convert the 1950s church into a twenty-first century theater, but a great amount of work was required. From the outside a small amount of facade work is visible, but most noticeably, a new handicapped-accessible sidewalk has been poured leading from the public sidewalk to the front door. Also visible, is the (under construction) new emergency exit required by current codes.

Inside, the transformation is moving ahead quickly, with metal studs up for walls in the front which will form three restrooms and a ticket table. While the entrance will be smaller than the previous entrance, the three bathrooms accessible to the rear of the auditorium offers a massive improvement to the previous theater. In the past audience members had to go to the front, beside the stage to get to a restroom and that restroom was shared with the cast and crew.

The increased space has allowed for a much larger stage which will transform the possibilities for sets and staging. The sub-flooring for the extended surface has been completed and wiring for lights and sound was underway when I visited. A door to one side of the stage will lead to the basement, allowing actors to enter and exit out of sight of the audience.

The church pews will be retained for use as seating and President of the Board of Directors, Bonny Pendleton was considering fabric to cover the new cushions to be installed on them. The room, at a capacity of 100, and with an expanded stage promises to deliver the kind of intimate experience community theater audiences have come to expect.

The theater has two levels, with the 2500 square foot auditorium covering a basement of the same size. The downstairs is almost as important to the group as the public space. For the first time they should have adequate space and quality space for costumes, props, staging, dressing rooms, a crew and cast restroom. Bonny pointed out there is even room for rehearsal in the large, open center of the basement. On whole, it represents a spectacular improvement.

Follow their progress and get your tickets to the first production at the new location when they go on sale. You’ll find progress updated on their Facebook page and information (including tickets once they are available) on their website. Consider supporting community theater. It’s an important component to a city’s art scene.