A Market Square Business Closes: A Look At the Empty Spaces on the Square 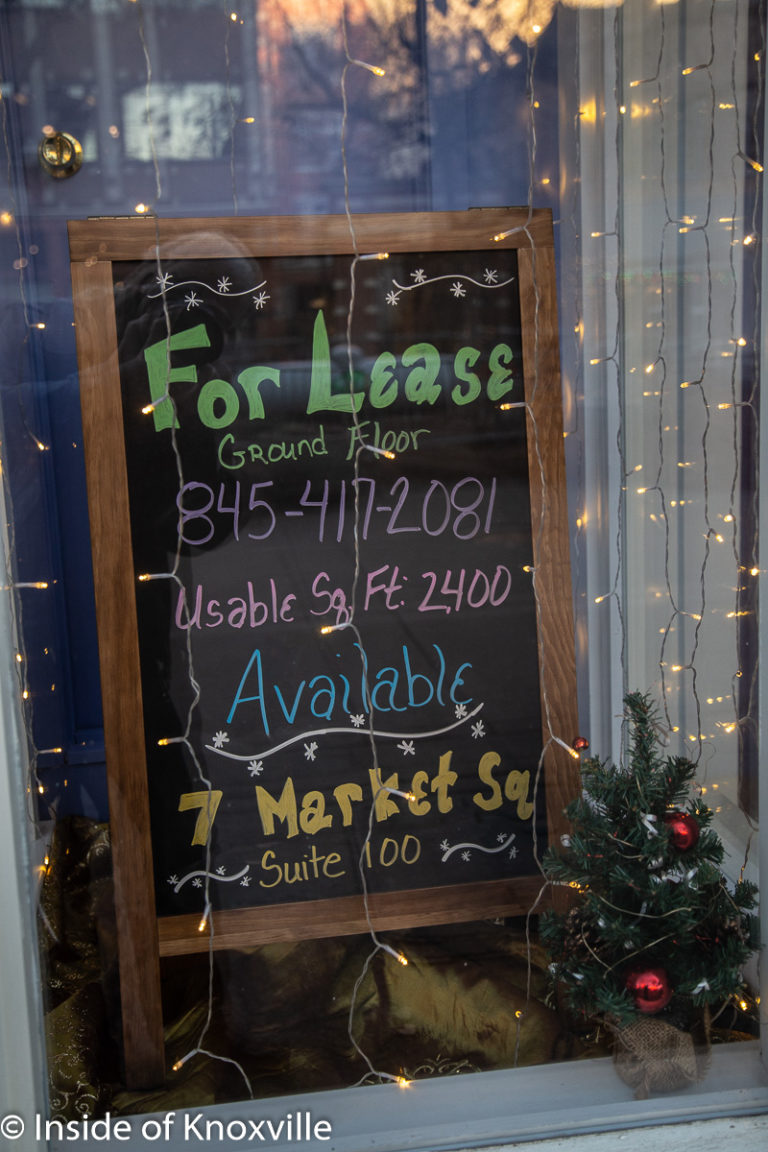 Market Square has long been seen as the epicenter of downtown Knoxville’s redevelopment and resurgence. The idea has emerged that Market Square is the core from which other development emanates. Still, it hasn’t been that many years ago that we first hit all addresses occupied at the same time – and even that comes with one exception.

Closings on the square have been greeted with premature pronouncements of the demise of downtown. Despite the massive growth in monthly readership since, the single largest number of readers on this website occurred five years ago yesterday with the announcement of three closures. It was big news that day, with nearly 20,000 people reading and the closures picked up by all the other news outlets at the time. In the longer view, none of it really hurt downtown.

The newest closure is Agora, which had occupied 7 Market Square. It had a good four-year run, but Laurie Ruderman, who was a friendly and steady presence the whole time, told me they simply never found the size audience they thought they’d find. “OK” is good enough for a while, but not forever. The business was one of two Agora locations, with the other in Tampa, Florida, to which Laurie has returned. It had a longer run than Steamboat had before it at that location. It is now available for lease and includes 2,400 square feet. If you are interested, you might want to call 845-417-2081 because it probably won’t remain vacant for long.

Despite the fact that several other addresses are currently vacant, it’s really only one of two that are currently available. The other is 24 Market Square, previously home to Bliss and, briefly, to Space Head. I spoke to Scott Partin, one of the co-owners of the building, and he indicated that he is currently in negotiations with a restaurant and hopes to lease the space soon.

There are three other currently-unoccupied spaces on the square, but none are available. 30 Market Square has not been offered for lease in the ten years I have lived downtown. A architectural firm operates in the upstairs, and the owner of the building seems content for the bottom floor to remain empty. The city negotiated to use some of the space for storage and trimmed the windows with seasonally appropriate decorations and advertisements, which was a nice improvement from the worn plywood that covered them for many years.

On that same side of the square, 26 Market Square has been unoccupied since the closure of Rita’s Ice in October 2017. The building was subsequently purchased by the West family and will become “Bernadette’s” in time. It’s taken much longer than expected but promises to be very unique when it opens.

Back across the square, Bluetique closed at 31 Market Square last January, after a five-and-a-half-year run in the spot. In August I wrote about TVA Credit Union’s plans for the spot as they look to move from the large building at the corner of Wall Avenue and Gay Street. Based on the signage and the demolished interior, it appears those plans are moving forward. I may have an update on those plans sometime this morning and if so I’ll share any additional information here.

So there may be less to the number of vacancies than meets the eye. Five vacancies, two businesses in the works, one never available for the last decade, another freshly available, and another in negotiation. Given the details, it seems to be more of the natural turnover that is a constant reality for small businesses.