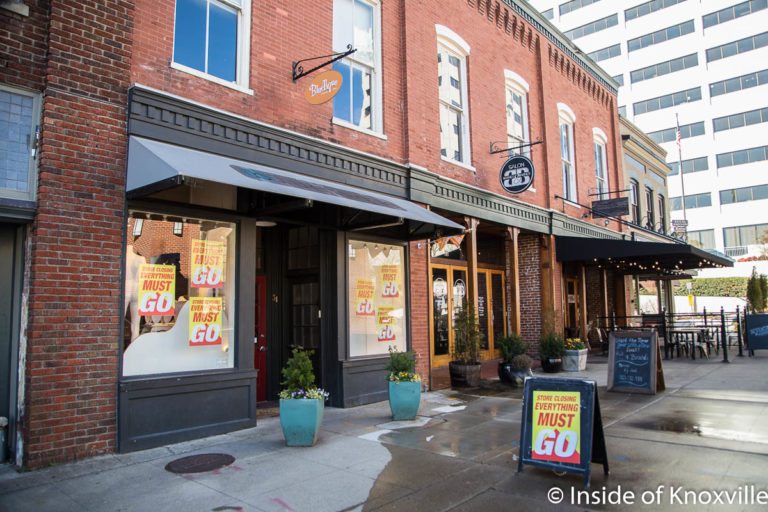 It’s the third business to close on Market Square in the past few weeks. First Blue Coast Burrito closed at 37 Market Square, followed by the Juice Bar on the opposite corner at 2 Market Square. Now Bluetique, located at 31 Market Square for the last 5 1/2 years is closing. (See original story here.)

While Market Square once had 37 ground-level commercial addresses, it now has 30, due to the open space on the east side and consolidation of addresses for larger restaurants and shops. It is only in recent years that is has been fully occupied for the first time since an earlier era. So, where does Market Square stand now for vacancies?

On the east side, there are 13 commercial spaces available. Of those, four are currently not utilized. 2 Market Square was the home of the Juice Bar, which recently closed. I’m hearing rumors it is already under contract. 24 Market Square, the former home of Bliss, which moved to Gay Street, is empty.

26 Market Square was previously Rita’s Ice, but will soon be Bernadette’s Crystal Palace. The owners of 30 Market Square have chosen, inexplicably, to not make their ground-floor commercial space for lease. So, of the four spaces, it appears only one, 24 Market Square, appears to be waiting for a occupant.

On the west side of Market Square there are 17 commercial addresses and only one vacancy currently exists. 37 Market Square was the home of Blue Coast Burrito, which has closed. A replacement, however, was immediately announced. With the closure of Bluetique, there will be another opening on that side, but given how quickly the spaces are grabbed (with the exception of 24 Market Square), it doesn’t seem likely to stay vacant for long.

I stopped in to Bluetique to chat with the workers there who said that all ten Bluetique stores have closed. The small regional chain topped out at 10 stores, of which Knoxville was the fifth to open. It was the last to close, though I was told business had plummeted during the fourth quarter and that Christmas was not good, they felt, due to the rainy weather limiting foot traffic. This runs counter to what I’ve been told by other businesses, who reported having a very strong Christmas season, though it was rainy.

There is no doubt that this is a difficult era for brick and mortar retail. Our downtown is fighting an uphill battle to bring retail back in an era when it has been decimated by online sales. To understand that this isn’t a Knoxville issue, one only has to look at recent headlines regarding Sears, or stroll the streets of New York City and see the empty retail space there.

So, where does this go? I think we’ll quickly fill Market Square once more, but what of the bigger picture? It may be that successful brick and mortar business will be those that offer merchandise or a service can’t be easily replicated online. That likely means more restaurants and bars or other forms of entertainment. For those of us who want a wider range of downtown retail, it is incumbent on us to support it when it happens or it will disappear.