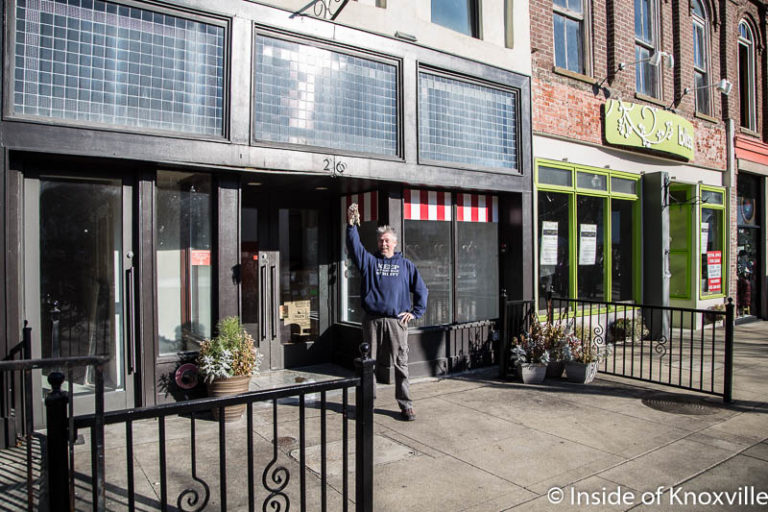 When Rita’s Ice closed after nine years at 26 Market Square, the location seemed unlikely to remain empty for long. But there were questions: Given the increasing price of rent on Market Square would a chain take the space? Would the vacant second floor find a use? A chain of some sort seemed likely.

A little-known backstory, however, might have implied a different possibility. Scott and Bernadette West, as it turns out, had attempted to purchase the building in the past from owner Jamie Henderlight. They’d shaken hands twice on the deal, the last time coming just before the federal indictment that ended any possibility of a purchase at that time. In recent months, not knowing that Rita’s might close, Scott West had been working to purchase the building, again.

When he closed on the building last Friday, it became the third West-owned building on Market Square joining 28 (Preservation Pub) and 32 (Scruffy City Hall). The family also operates Earth to Old City, Uncorked and Market House Cafe, all on the eastern side of the square.

Lamenting that the earlier deals weren’t completed, Scott pointed out that the price he had to pay had increased ten-fold from an original agreed upon price of $120,000 to the current price of $1.2 million. Still, as he said, “I’m not making money off the purchase,” rather, his intention is making money off the business that will inhabit the building.

What is that business? Well, it’s yet to be named, though as of the time we talked, Scott had gotten eight hundred suggestions in an online question. Leading candidates include things like “Mineral Spirits,” “Cavern Tavern,” and “Mine Your P’s and Q’s,” along with “Knox County Quartz House.” You are free to join in and attempt to name the new business and Scott is offering a $500 party to the winner.

You may have noticed a theme in those suggestions. As Scott puts it, he’s, “had a crystal chip on my shoulder” since the time World Grotto closed. It seems he kept the crystals that many of us remember from that underground cavern and he’s expanded his collection: To the tune of 30,000 pounds of quartz, amethyst, citrine and more. If a person amasses fifteen tons of crystal, it eventually has to land some place. Throw in his collection of medieval doors and something has to give.

That place will be at 26 Market Square, where the Wests plan a non-smoking, crystal-laden bar which will encompass the two floors of the building, as well as the rooftop. The interior will be crystal-intense, including multi-level crystal bars and more. Bars will be included on each floor which will be both open to the public, but also available for major events. A joint atrium entrance will be constructed with Preservation Pub, which mirrors 26 Market Square with about 2,600 square feet on each floor.

For those of us who remember World Grotto, we remember its singular nature. He pictures this being similar, but much, much bigger in scale and ambition. There will be no regularly-scheduled live music, but he pictures world music beats playing off the Middle-Eastern vibe.

The rooftop expansion will include joining both roofs into one space. Some of the structures atop the Preservation Pub rooftop will be moved, making for a much larger usable space on that side before the addition over 26 Market Square. A glass structure is planned (not visible from Market Square) along the back half of the rooftop, enclosing it to make it climate-controlled, but with 360° views giving the illusion of being outside.

As you might expect, the crystals will creep to the top of the building, being incorporated into the glass enclosure, as well as forming what West terms a, “crystal forest.” “Imagine seeing the city from the rooftop, but seeing it through crystals,” he said with the usual Scott West intensity.

He admits to being addicted to the conquest: “As soon as something opens, I want to open something else . . . It’s all about proving you can do it.” If there is a downtown family who can lay claim to making the spectacular happen, it would be hard to find a better candidate. When Scott talks about “crystal waterfalls appearing to go through each floor,” you start preparing to see just that.

Timetables on these projects are always elusive and Scott always wants his ideas to happen yesterday. He feels he can get much of it in place and open by April. He points to the fact that the building is in much better shape than their previous projects with infrastructure such as sprinklers and major electrical supplies already in place. He plans to bring in multiple crews and has already put them on notice. A key meeting with the city will take place on Tuesday and he says demolition will start the next day.