Sapphire Lays Claim to Its Story at 428 South Gay Street 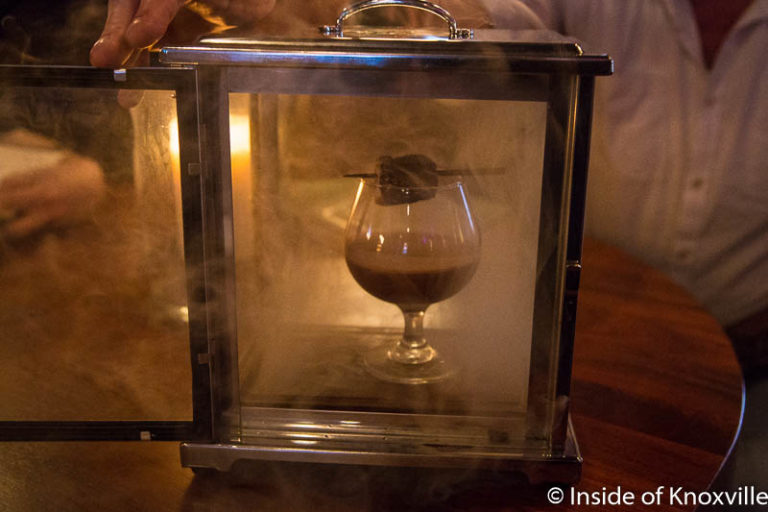 Located at historic 428 South Gay Street, Sapphire has been a downtown cocktail destination since 2005. A dozen years in is long enough for a business to reevaluate itself, take stock of strengths and look toward its future with fresh eyes. That’s what owner Aaron Thompson – who started there as a bartender, becoming the owner in 2008 – has done with the help of consultant Jessica King and bar manager Patrick Joyce. The group decided it was time to update, evolve and do something fresh and new.

In doing so, they decided to draw inspiration from the building’s earliest days and to embrace the history their beautiful space represents. Tagged a “modern bar,” from the beginning, Jessica pointed out that “modern” is an eternally elusive concept as it continually shifts. In deciding to go with the lighthearted tagline, “Fine food + Fancy Drinks,” they are being descriptive, while not taking themselves too seriously.

As a start on the project the group enlisted the services of Knoxville’s historian and director of the Knoxville History Project, Jack Neely. His work – a distilled version of which is included as the centerpiece of the menu – details how the building replaced one lost in the 1897 Gay Street Fire, replacing a three story building with the current five stories. Originally a shoe store, by 1920 it housed Fidelity Trust Bank. After a nine year run as a bank, in 1929 it became what it would remain for most of its history: a jewelry store. Hope Brothers Jewelry brought in the beautiful mahogany you’ll find in the bar today, but the business soon became Kimball’s Jewelers which it remained until 2003 when the business relocated to the west.

The menu – which is more of a finely reproduced book – references this history in numerous ways. In addition to the historical insert by Jack Neely, designer Diana Lowrie, with Jessica King, has carefully reproduced many items which might have been offered in the jewelry store from their dozens of hours of research though old catalogs and advertisements from the era. The outside of the menu is patterned after the cover of a 1901 city directory.

From this history, the bar draws its inspiration of luxury, comfort and elegance. Building from that foundation and exploring the best in the cocktail world in some of the cities best known for elegant libations, the group has shaped the cocktail offerings to bring the best of what is available to Knoxville. Each member of the bar staff underwent training from the BarSmarts program in an effort to raise their skills.

Aaron has also recently attained his level one sommelier certification and has reshaped the wine selection. The wine list was developed after considering hundreds of small batch products and emphasizes old-world style bottles. In making the selections, Aaron focused on, “sustainability, organic practices, reputable importers and balanced character.”

The food menu has also been reshaped to offer a more elegant list to pair with the fine wines and cocktails and to expand on a collaborative effort with local food purveyors. You’ll find A Dopo sourdough used in multiple dishes, as well as Sweetwater Valley cheeses, for example. Century Harvest farms provides beef, Blackberry Farms provides cheese and Springer Mountain Farms the organic chicken. Aaron insists that when local businesses work together, everyone is made stronger. All food is prepared in-house.

Jessica said, “The story was sitting here waiting for us to articulate it and now we connect its past to its present.” Diana added, “You can’t ignore the space when you enter. I felt my job was to overlay personality . . .”

In an effort to assist you, the reader, I sacrificed myself to sample bits of the new cocktail menu. Divided into categories for easy navigation, it starts with the spirit-forward, “Strong and Boozy” category, later offset by the “Low Octane,” (low spirited) category and moves to the “Sweet” category from which I sampled the delicious “Cake Eater.” This cocktail started with a challenge from Jessica to Patrick to develop a drink using cotton candy. He balanced that sweetness with less-sweet liquors to produce a tasty treat that allows the customer to do the final mix, revealing varying colors. Several of the cocktails are interactive in this manner, adding to the fun.

There’s a “Balanced,” category, and “Standards,” from which I tasted the excellent Martinez. The biggest kick, however may be found in the “Ambitious,” category. I tasted the Mag the Mighty which is as much fun to watch smoking inside the glass container and opening for the reveal as it is to drink. A charred marshmallow sits atop this smoky, adventurous drink which includes hickory smoke, Rittenhouse rye, chocolate liqueur, scotch, Aztec bitters and Orange Wheel.

From the menu to the carefully selected (and often local or regional) spirits behind the bar, you’ll sense the thoughtfulness behind the entire approach. While you enjoy the surroundings, cocktails, wines and food, be sure to explore the menu and search out Jack Neely’s piece along with items from catalogs past (elegant ear cleaners!), a 1921 illustrated map of Knoxville and a fun etiquette section developed by Patrick and Jessica.