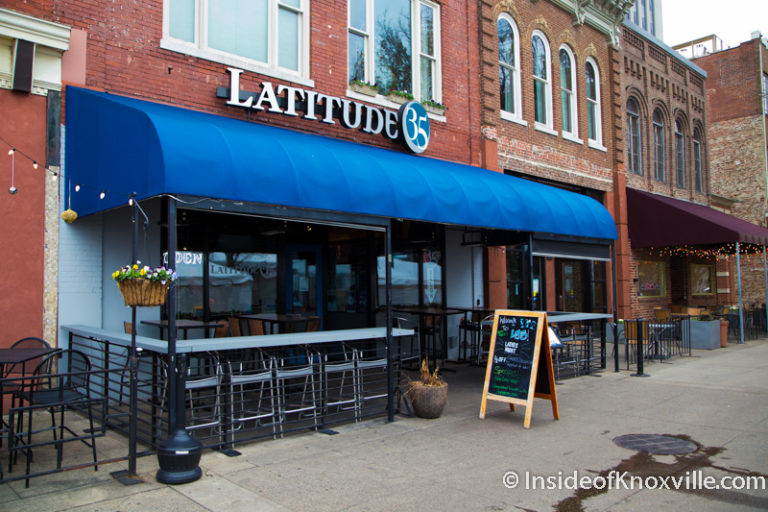 It’s the kind of headline I would not have imagined at this point in downtown’s redevelopment. Even yesterday when I wrote about business changes, they all seemed more or less for the better and simply a common pattern of re-alignment. Then comments started mounting about one restaurant and another, so I followed up. And the comments were pretty spot on.

I’ve actually been able to confirm very little beyond the fact that these businesses are closing. I may have updates even as the day goes on and I’ll try to post to the FB page and twitter if I learn more. It’s rare since I’ve been doing this that I get much in the way of “no comment,” but I got a good dose of it yesterday.

I’ll start with Latitude 35. It is definitely closing – Sunday will be their last day of business. The why part is a bit less clear. I spoke to several people, including a shift manager and several others around the square who said they are losing their liquor license. I also had one person tell me the new grease interceptor KUB is requiring is a problem for them. This is a theme among the restaurants on the square and off. The new grease interceptors are extremely expensive and most of the restaurants don’t own the building they inhabit, so it puts them in a position of spending tens of thousands of dollars for an improvement to a building they do not own.

I couldn’t confirm the above because when I called Gary Higgins, the manager, he didn’t answer, but rather texted me saying that I should email Jimmy Buckner, which I did. He didn’t respond in time for this article, but perhaps I’ll hear from him and update this portion a bit later.

Orange Leaf is also closing, but I know even less about this one. I was able to confirm they are closed as of last Sunday night. Additionally, all Knoxville locations of the chain closed, so I’m assuming the closure had nothing to do with downtown specifically. The building owner at 36 Market Square confirmed this much and I should be able to talk with him on the phone today to gather more information. Depending on what I learn there, I will update this article or write another if there is enough information to warrant that.

Finally, after ten years on Market Square, Shonos in City will likely soon close. I talked to owner Willy Rosenberg and his son Josh. They confirmed the pending closure, though the business is for sale should someone be interested. Willy has health issues to which he needs to attend and he mentioned the pending requirement of the new grease interceptor which will cost him nearly $20,000. He’s having a hard time justifying the expense this close to retirement age. He’d love to sell to an interested buyer and he would have liked to continue the business, but the combination of pressures seems insurmountable.

Taken individually, these might not seem too significant. For my part, I didn’t make it to Latitude 35 very often. Orange Leaf was a chain that in some ways seemed like an oddity downtown. We have Nama for sushi. To counter some of that, however, Orange Leaf seemed popular from its arrival and I know I was there far more often than I ever imagined – particularly for a certain five-year-old. And I really liked Shonos’ food and low prices – especially for lunch – and any business that’s been around for ten years and remodeled just last year is a shame to lose.

Of course, there’s also the momentum impact. To remove four (counting Steamboat) restaurants from one square all at once is a blow. How quickly we can replace them will be telling as to whether this is a glitch along the way or a sign that we have some trouble brewing.

I talked to several other business owners on the square about the grease interceptors and it is a major issue for several of them. Robert McClain told me they are making plans to add the interceptor at Blue Coast. B.G. DeHart at Stock and Barrel said they cannot justify the $30,000 – $40,000 it would cost them, so they have to wash all their dishes by hand (not having a dishwasher is a work-around for the grease interceptor). It’s a very big problem and a large additional cost for small businesses.

If you know of anyone who might be interested in buying Shonos in City, please have them call Willy at (865)544-5800. He’s likely closing just after the new year if he doesn’t find a buyer.

Jimmy Buckner from Latitude 35 contacted me to say the following, “We are rebranding and there are many moving parts . . . We could have kept everything quiet, but it was more important to communicate with our employees so they can better plan for their immediate future.  We have a great staff and respect each person and their families.”

Ken Mills owner of 36 Market Square confirmed that Orange Leaf has vacated and that it was sudden. A quick search around the internet shows that there are problems brewing in the business.  For us, the bonus is that a prime spot on the square is now available. He’s already had some interest expressed and if you are interested, please contact Josh Mills at (865)850-3825.