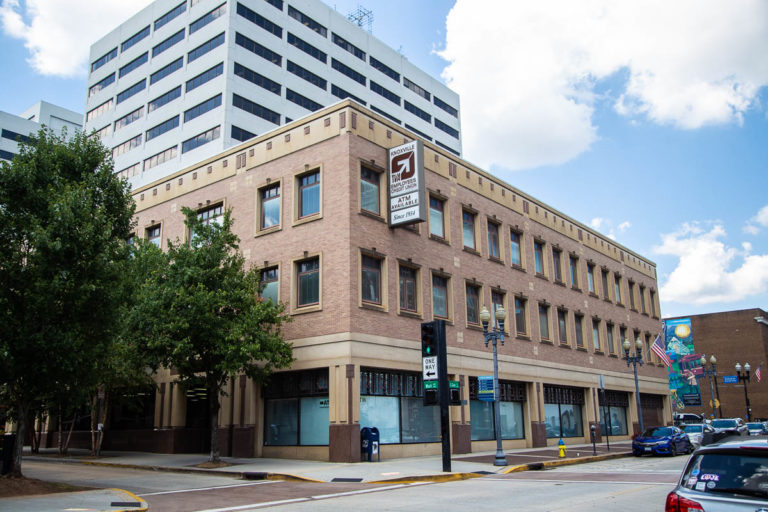 Current Site of the TVA Federal Credit Union at the corner of Gay and Wall, Knoxville, August 2019

Rumors have circulated for some months that the downtown TVA Credit Union, currently located at the corner of Gay Street and Wall Avenue, has plans to move. While contracts have yet to be finalized for a purchase of the building, steps have been taken for the credit union to purchase and occupy 31 Market Square, most recently home to Bluetique. The Historic Zoning Commission has approved the plans for the new location.

The primary exterior alteration is to insert a door inside the current entryway to the main entrance. This door, which cuts through a wall perpendicular to the front of the building, will lead to a small space for an ATM. So, the credit union will provide access to an ATM that is out of the elements and somewhat protected, while still being completely visible from the square through a window.

George Armour Ewart Architect is leading the design effort. As discussed in this space with the opening of First Century Bank downtown, the interior design reflects the changing realities of modern banking. With so much banking happening online, there is less need for the cavernous space required in a previous generation. Along with the reduction of in-person banking is the reduced need for personnel to interact with the public.

Just inside the door of the new space, past the ATM, will be a very small waiting area with room for about four chairs. That area flows to two teller “pods.” Two small offices follow, to be used for private interactions with customers. Space for a copier and a change machine are included. And that’s all. The entire footprint of the floor is roughly 2,000 square feet and this includes room for storage, a staff restroom, an elevator and stairs.

As discussed in the First Century Bank article cited above, the reduction in space required for basic banking functions leaves room for other uses. In the case of First Century, while they occupy a very large building, they occupy only a small portion of the space on street-level, leaving room for a planned restaurant.

For the TVA Federal Credit Union, what is left behind, should this proposed move become a reality, is a very large, three-story building occupying an extremely prominent corner of Gay Street. Sitting on the 300 block of Gay Street, it is adjacent to the most densely developed block in the city, in the 400 block, which includes a large number of residents and businesses.

It is my understanding that the building will be offered for sale and for redevelopment. It’s a singular kind of building, with no openings on Gay Street, which is a poor urban design. The interior has a massive open atrium, meaning the large building does not include as much square footage as one might expect for a building that size.

At the very least, the building would have to be drastically altered to assume an alternative use or mixed use. It’s an incredibly valuable corner, but whether a potential developer would consider the building a candidate for re-purposing is an open question. A demolition seems as likely as not.

The potential for retail space lining that corner of Gay Street and wrapping around the corner onto Wall, restoring some of what was lost on that street more than a generation ago, is an exciting prospect. Extending the residential and/or retail corridor along Gay Street is equally appealing. Perhaps the building can be preserved with an altered interior, exterior and, perhaps, additional floors. Simply having the opportunity to discuss the possibilities is exciting.