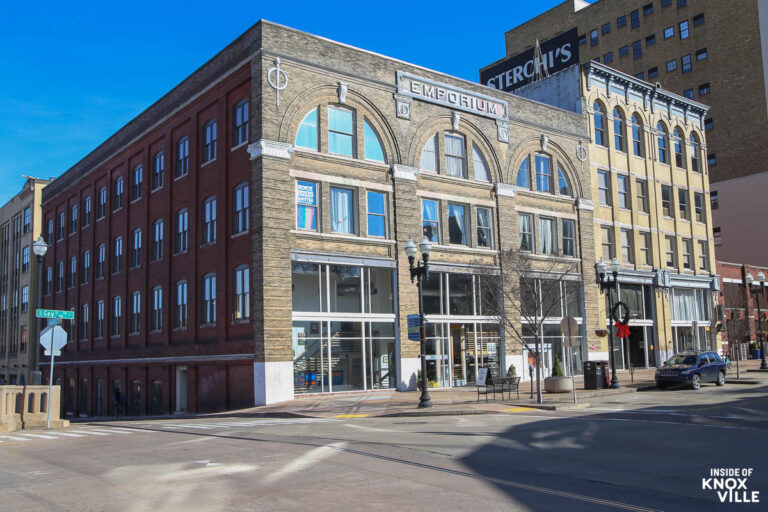 The Emporium Building, built at the end of the nineteenth century at 100 South Gay Street, owned for many years by Dewhirst Properties, has sold to Boghani Properties, LLC. for $24.75 million. Additionally, a parking structure on the opposite side of the block, at 121 State Street was included in the transaction. The deal was brokered by Will Sims of Oliver Smith Realty and Development, Tim Hill of Hatcher Hill Properties, and Laura Heinz of Heinz Realty.

I spoke with David Dewhirst regarding the building and sale and he said the building was by far the largest project of his young career when he purchased it around 1999. Kristopher Kendrick owned it at that point and it had been empty for about two decades. Prior to Kristopher, the building had been used to sew military tents and David said hundreds of sewing machines remained. Kristopher approached David and convinced him to buy it. David said he “had a way of being very persuasive.”

David’s prior projects had been mostly the small buildings on the western side of the 100 block of Gay Street, including 121, 123, 133, and 137. For the new project, he began approaching banks, but no Knoxville banks would loan him money. “They said, ‘No,’ but it was almost a polite version of ‘Are you crazy?'” He said they told him no one wanted to live downtown.

Ultimately, he was able to lease the ground floor and the basement to the city of Knoxville, as Mayor Ashe agreed to move the Arts Alliance from the Candy Factory into the space. This allowed David enough leverage to convince the Bank of Birmingham to loan him the money for the renovation. Birmingham had seen a surge of urban development and the banks understood the demand for downtown living.

He opened the building around 2003 with forty residential units and about 35,000 square feet of commercial space. It was full immediately. He later purchased the sheltered parking which was sold today, from the owners of John H. Daniel, and offered it as parking for Emporium residents.

As for why Dewhirst Properties is selling the building and parking facility, he said they took a look at the projects they have planned, including many on the northern edge of downtown and several in the area of the  new stadium and determined that some properties would need to be sold in order to finance the major projects they have planned. In other words, the money made today will generate downtown buildings of tomorrow.

Boghani Properties, LLC and related companies have recently made extensive purchases in the downtown area. Holdings now include, in addition to the properties in this article, 708 East Depot (formerly Saw Works Brewing), 9 Market Square (Soccer Taco and more), 408 – 414 South Gay Street (locations for Kilwins, Babalu, and Maple Hall), and 125 East Jackson (formerly NV and The Bowery).

I was told that plans for the Emporium are status quo under new ownership, with current leases and parking arrangements to be honored. The Jackson Central Group, the group currently managing JFG Flats, is assuming management of  the property. To inquire regarding possible leases, please email leasing@jcgknox.com or call (865) 364-0901.