Inside of a New York City Christmas 2022 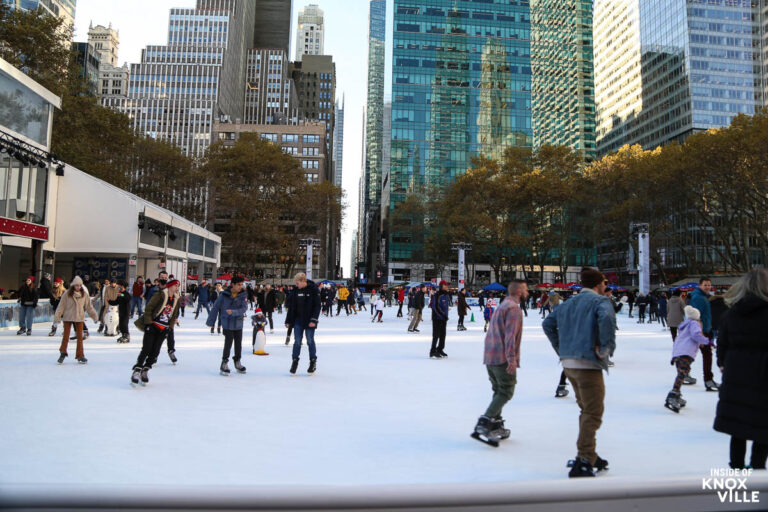 Long-term readers of this website know how much I enjoy New York City. It struck a chord with me as a small child and now that I’m able to travel there more often, I do so with some frequency. A couple of weekends ago we returned, with Urban Boy and Urban Girl in tow, to enjoy the sights of Christmas. They experienced it in 2018 but, thanks to the pandemic, they had not returned since.

That meant that Urban Boy, age 7, remembered little of the city. We had three days to meld the interests of a seven-year-old who had no memory of the city with those of a thirteen-year-old who knows, well, everything, including what she wants to do in the city. It worked out perfectly. Or at least that’s my story.

We arrived in New York City on a Friday afternoon, starving. We piled into the Pret a Manger behind Bryant Park (our hotel was around the corner) for lunch, but only after I secured the requested street dog from Urban Boy. I joined him and we all loved our lunch. That Pret was our home-base the first time (2017) we brought Urban Girl and she was delighted to resume the relationship.

After we got fueled up, we spent some time in Bryant Park looking at the shops, watching the ice skaters, and curling. We learned that curling was so popular, reservations were days out. I love watching the skaters there (It’s the only free rink in the city.) because the viewing area is elevated in relation and it’s easy to see the rink. We also went around the corner to visit the Knoxville lions on the front of the NY Public Library and went inside to see the Dickens display (how very seasonally appropriate!) that included some of his writings among other things.

We stopped into the hotel and while others rested, Urban Boy and I hit the M&M store. I’m not sure what he expected, but he didn’t find it, so we moved on. Then he discovered the imminently tacky I♥NY stores. It perfectly fit his love of all things sparkling. He bought a little souvenir (a tiny glass apple) and demanded that we stop at several others as we passed them over the next two days.

We gathered the brood (We had allowed Urban Daughter and Urban Son-in-Law to tag along.) and walked to Rockefeller Plaza to see the big Christmas tree. We’d watched the television special of it being lighted just a couple nights before. The tree wasn’t the wow factor with the kids that we’d hoped, but they liked it. We then perfectly timed our approach to Saks Fifth Avenue, arriving just as the rotating light and music show started. We enjoyed the Saks windows, particularly the ones with retro-toys, and then stopped into St. Patrick’s Cathedral, which did impress the young Urbans.

I’d imagined we’d walk further and see the Bergdorf Goodman and Bloomingdale windows, but the crowds had impacted the troops. They were done. A word on the crowds: I’ve never seen anything quite like them. Not on Thanksgiving at the Macy’s Parade in 2018, nor black Friday in Macy’s (same year). There was an intense herd from Macy’s through all of mid-town to the bottom of Central Park. Not really a fun crowd, so much as a difficult crowd. Outside those areas it was (mostly) fun crowded. I’m not sure if it is pent-up demand or what, but it was a challenge when you have kids you’d like to not lose.

We walked to the other side of Times Square to eat pizza at John’s of Time Square, which is in a beautiful old church and has excellent (and I mean great) pizza. We stuffed ourselves and made our way back to the hotel. Once everyone was tucked in, I left, of course, for a drink in the rooftop bar, St. Cloud, at Knickerbockers (maybe the best Old Fashioned I’ve ever had – and it should have been!). It offered great views of the Times Square Ball (you can party there for the ball drop, with a seat! for only $3,750 a person!) and Times Square.

Saturday was our rainy day and we started with pre-breakfast chocolate croissants (for the young ones) before a breakfast at Pret. We enjoyed the Macy’s windows (which were my favorites) and Urban Boy got to hang with the foxes (his favorite animal). Urban Girl and Urban Woman went to H&M to find suitable “fancy” attire for our Sunday evening dinner, while Urban Boy and I walked (very circuitously) to the Nike Flatiron store. We got lost, soaked, and in the end . . . they didn’t have kid’s shoes. We laughed at ourselves and it was a highlight of the trip.

Next up, we re-grouped and walked to Wizarding World, aka Harry Potter Land, aka Harry’s Hell. It was high on the kid’s list of things to do in the city and I think they hated it as much as we did. The crowds were so thick even Harry couldn’t have waved a wand. We grabbed a butter beer for her, an owl for him, and got in the 30-minute long line. Nevermore quoth the Raven, Nevermore.

The World’s Largest Bookstore was high on Urban Girl’s list and when one of them wants to do books, we do books. It was nearby, and at over 154,000 square feet and 12.87 miles of shelving, the Barnes and Noble at the north end of Union Square didn’t disappoint. Urban Boy dug the lego Batman and got a racoon puppet, while Urban Girl snagged three books she could have purchased in Knoxville, but can always say they came from there. I’ve done the same as far away as Shakespeare and Company in Paris, so I get it.

I’d intended to walk the troops to the south end of the square for an independent (and also massive) book experience at Strand, and then through Washington Square, but their fatigue and the rain overruled me. We took a cab to Cafe Reggio in the Village and had a great lunch, while I savored my favorite part of town.

After a cab ride back to our hotel, we rested briefly before walking to the Lyric Theatre for Harry Potter and the Cursed Child. The play focuses on Harry and crew as grown-ups with problem children of their own. Urban Girl had read the book and none of the rest of us knew what to expect. It was the perfect culminating experience after we watched all the movies (repeatedly) during their nine months living with us during the pandemic.

At three-and-a-half hours long, I was a little concerned for Urban Boy. No need. As always on Broadway, it was stunning. I can’t explain how they did many of the effects, the story was good and we (hopefully) have now completed the Potter arc. We loved it, got back to the hotel really late, ate cold pizza, and crashed.

After breakfast (you know where), we took a cab to the Metropolitan Museum of Art. I was the only one of our group who had been and we decided to focus on the Egyptian exhibit, which we worked through pretty thoroughly. We all enjoyed it and then Urban Girl requested to see the older European Masters. Um, yes! She enjoyed it, he bailed, and we agreed it was time to depart.

The Central Park Zoo was probably their number one request for places to go on the trip. We walked there and loved, as always, watching our favorites, the sea lions. We checked out the bears, snow leopard and penguins before heading to their favorite part, the petting zoo. Urban Girl made selfies with the goat to send to her friends and they generally had a blast feeding the animals.

We meandered through the upper east side, arriving at Serendipity 3 to learn there was a three-and-a-half hour wait. We walked to an Italian restaurant instead, then to Nike Fifth Avenue, the monster of all Nike stores. They had kid shoes and Urban Boy picked some that I agreed were the best looking pair.

They were expensive, but I haven’t bought boy shoes in my life that I can recall, and we were in New York City, so I expect things to cost more. We took them, neither of us having any idea that Lebron James had a signature shoe. Urban Daughter got a good laugh and explained to us that her middle school students dream of having Lebrons. We encouraged him not to trade them away at school. Sure enough, he got an offer his first day back: A marble for your Lebrons. Savvy second grader that he is, he asked to examine the marble. I’m kidding (thankfully).

We ended our time together with a meal at La Grande Boucherie. We decided to take a cab, which was worse than walking as cabs (or Uber) couldn’t get to us and then traffic crawled. We were an hour late for a dinner that wasn’t as fabulous as we’d hoped, but it was good for the young ones to eat at a “fancy” restaurant and learn a little more about the world. I will say the crème brûlée was the best we’ve ever had and the chocolate torte wasn’t shabby. We had a great time and it was a good way to end our Christmas in the City.

If you want to see every minute, check out the full run below.