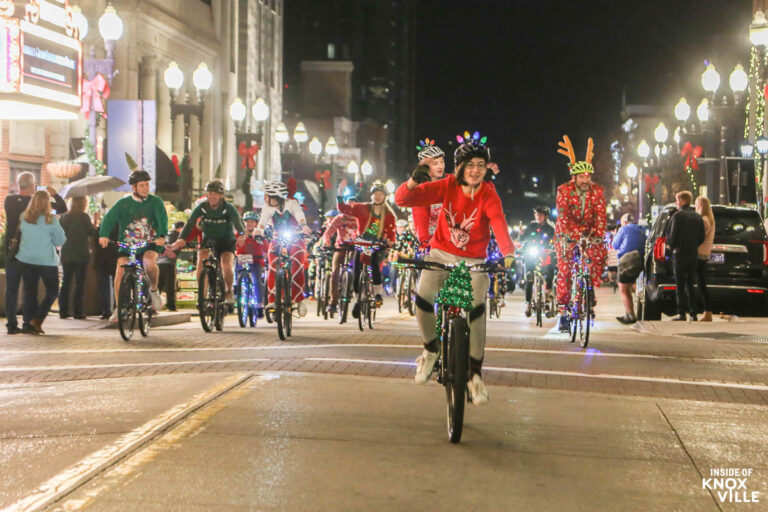 I’d really forgotten how fun and, well, joyful the Tour de Lights event is for the city. This years rendition, sponsored as always by Bike Walk Knoxville and Visit Knoxville, this year’s Tour drew somewhere over 1,000 cyclists. Saturday night’s route was altered this year to start from Suttree Landing Park, traveling through the Island Home neighborhood, before taking Sevier to Gay Street and crossing the bridge to enter downtown and end at Market Square.

It’s impossible not to smile as the colorful cyclists pass by yelling “Merry Christmas,” as the crowd yells back. If that didn’t float your holiday boat, a giant Menorah pulled by a cyclist, as the crowd reverted immediately to “Happy Hannukah!” was bound to get you in the spirit. There were lots of laughs as the passing decorations grew crazier.

The range of cyclists had to be the greatest of any of the events so far. There were cyclists who looked hard core and those who didn’t look so much like they spend a lot of time in the saddle. There were many children and not a few folks who might be looking at Social Security. There were families, couples, and solo riders. There were groups of friends and people riding with their furry friends.

If you missed the event, I hope you’ll come downtown and enjoy it next year. The crowd was a mix of people who did just that and people who were asking passersby what in the world was happening. It’s worth coming downtown to find the joy.

I’m posting a few photos up top, but I hope you’ll take the time to enjoy the full gallery, included below.