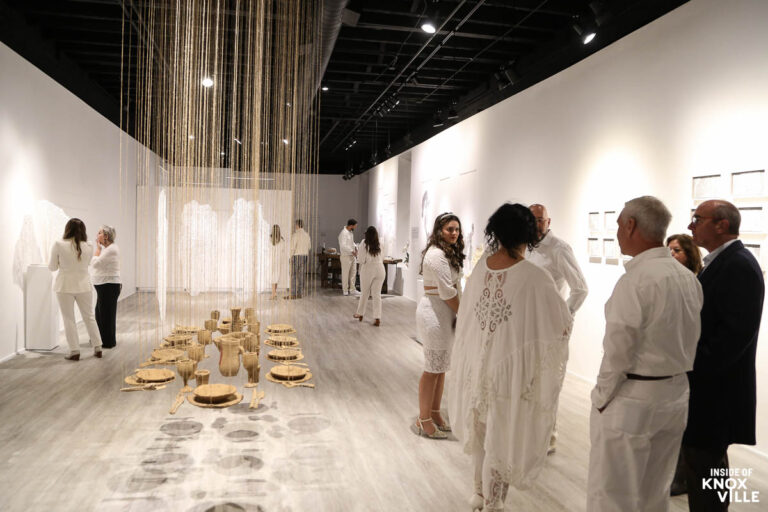 Lilienthal Gallery, 23 Emory Place, was the site recently for a Winter White opening. Beyond a simple theme for a party, the recommended color of dress echoed the work presented by four Israeli women, each of whom work in shades of white. The unifying theme of the exhibitions is, as the name implies, taking traditions and presenting them in provocative ways.

The exhibition is curated by Ilana Lilienthal, Tally Ben Sira and Anat Ahovey Baruch. Ms. Sira traveled from Israel to be present at the opening and to discuss the work of the women. She presented a fifteen minute introduction to their art and discussed the rising role of both realism and craft in galleries around the world, after some period of neglect.

Ziva Ben-Arab Rabinovitch, represented here by her work with egg shells, draws her art from materials and techniques found in the kitchen. The materials scarcely resemble themselves as they take on dimensional shifts and reconstruct what would be refuse from a kitchen into a shimmering reminder of the hands that used them there. ““I believe the largest role in my life is motherhood which gives me a holy and blessed feeling.” To her, the white “represents purity and holiness,” as she composes broken parts into something divine.

Ziva Wagner Epstein, whose weaving is presented here, has spent a lifetime traveling the world in pursuit of understanding traditional weaving techniques. Taking what she is learned, she transforms the older techniques into completely modern works. “The place of the individual thread in the fabric, and the freedom of the threads, allow me to build a story in the fabric, the ideas, and the feelings that I want to express through my work.”

Edna Segev, a mosaic artist practicing in Israel calls her pieces “therapeutic works of art.” Working in mosaics for nearly a quarter century, she has been drawn toward “presenting different women from different cultures at different ages, covering and revealing their chests – each one in their own way of concealment.” Of her part in the exhibition, she says:

I wanted to give a uniform language to the project. I chose a uniform white stone color and filled the grooves with shades of gray. The focus is on the small nuances that create the uniform language and the attention to detail. The eye focuses on light and shadow, on the movement of the stone that creates the female body. The color does not steal the show from the story that each woman chooses to tell about herself. The story of every woman tells a whole world, where everything is allowed and everything is possible, where a woman has the right to her body, to her feelings, and her opinions.

Dvora Morag, as you can see from the work that forms the center of the exhibition space, uses objects from every day life. She grew up in a home of Holocaust survivors with few possession and uses objects in her work as a way to recreate her concept of “home and belongings.” In the Table Edited to Ten, the objects float above a missing table, with the absent table making its presence felt. Also included here is her work “Make Your Voice Heard,” in which she “gives each female character some kind of ‘shofar’ made from an everyday object, which is usually larger than the dimensions of the figure, calling for her to make her voice heard without fear, and without concern.

Taken together, the works form a powerful statement about home, women, honor, and place. It’s worth exploring during its run which extends through February in the gallery. The gallery is open Thursday through Saturday from Noon – 6:00 pm each day, and by appointment.