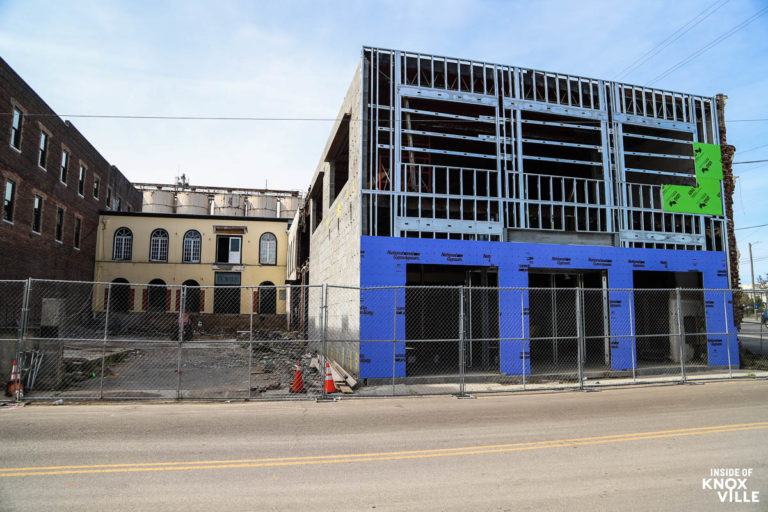 Just over 2 1/2 years ago I reported the former NV Nightclub and Bowery buildings would be redeveloped by Tim Hill. That project was slowed by a range of obstacles: The front façade of NV had to be completely rebuilt. A pandemic hit. Supply chains were interrupted. Building costs soared. And opportunity knocked.

Yesterday, Tim Hill ended his involvement with the buildings as he sold to Manki 3 Investments LLC. The sale was brokered by Will Sims of Oliver Smith Realty & Development, who will also serve as leasing agent and development partner. The group will utilize plans developed for Hill and will pursue a similar plan.

Tim Hill said he was approached by a group who was “eager to be in the market.” He said the offer to purchase the building and continue the project came at an opportune time for him “in order to free resources for a larger project.” He sees the sale as a win for downtown.

Will Sims said that group wants to “invest in downtown.” He said they will use the original plans to a large extent, including the exterior plans and the first floor commercial space. The commercial space will offer an opportunity for one-to-three tenants.

The primary change will come on the second story of each building. Originally intended for office space, the group will pursue a residential option instead. Will anticipates eight-to-ten residential spaces for rent. The outdoor patio and courtyard included in the original plan will be kept and it will be available to both customers of the businesses, as well as residents.

You can read more of the history of the buildings here. Each building contains about 4,500 square feet on each floor. While a restaurant or restaurants would be the anticipated tenants, the commercial space is flexible. Originally slated to be completed by Hatcher Hill in 2020, the new completion target would be sometime in mid-to-late 2023. Will said construction could begin as soon as May and the project should take twelve to fourteen months.

Will said, while the process in the early stages, with the sale just taking place, anyone interested, particularly in the commercial spaces, can contact him at 865-208-9933.