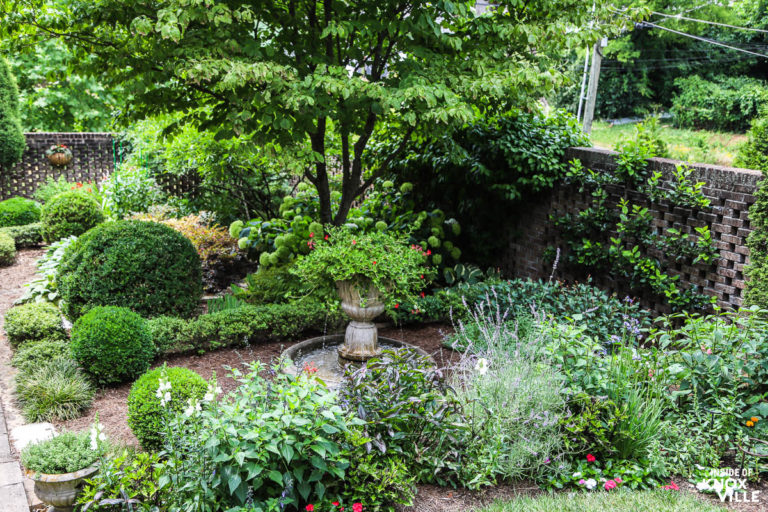 We pick up the tour at 605 Caswell, just across from 610 where yesterday’s article ended. Built in 1905, the home went through multiple hands, with owners sometimes staying as little as a year. In 1919, the Preston family moved in with their children, one of whom, Edwin S., would eventually become “minister and president of Hall-Moody College, now the University of Tennessee, Martin.

Even the Prestons held on for just eight years before moving along. Soon, the new owners lost the home to foreclosure and decades of as a sub-divided rental property followed. A series of new owners in 2005, 2017, and 2019 (the current owners) have brought the house back to its original beauty, while bringing it into the world of modern amenities and design.

Numerous touches of elegance are now found throughout the house, including chandeliers hanging in many of the rooms. The beauty extends behind the house, as well, and includes a beautifully appointed screened-in porch. The blend of remaining architectural features and modern design transforming former spaces to new uses make the house flow beautifully.

The lush garden pictured above at 1015 Luttrell began with a dream. The owners, who purchased the home in 2006. They described the “landscaping,” (quotes theirs) as consisting of “one lone pitiful dogwood tree,” in the front yard and a backyard parking lot filled with “asphalt, gravel, and kudzu.” Inspired by a visit to the English Garden at the Chicago Botanical Gardens, the gardens were walled and compliment the 1890 Queen Anne home to which they are attached. Other elements such as water features were also included.

There’s a lot happening in this relatively small space and a little something for everyone. The owner informed me that I played a small part in this one when we met several years ago as they considered a move from Maryville and I told them about this great little neighborhood while we sat at Crafty Bastard enjoying beverages and talking about the city. The garden has lots of veggies in addition to redubs, conifers and Japanese maples. You’ll also find little surprises sprinkled around that show evidence that grandchildren have been on premise!

What will likely forever be referenced as the “HGTV House,” at 1210 Luttrell was also delightfully included on the tour. The home was given a complete makeover in 2017 as part of the Urban Oasis series. Neighborhood residents, architects, and my friends Sara and Sean Martin of Open Door Architecture did the great redesign of this 1914 home.

As with so many of the houses in the neighborhood, there were numerous owners in the early years and a foreclosure along the way, ultimately slowing down when the right family landed there. That family included Richard N. Goss and his wife Jeanette, who purchased the home in 1936 and owned the home for over forty years.

The photographs speak for themselves as the house is attractive from any angle. Significant problems encountered along the way to making the house truly an “urban oasis,” were surmounted with elegant solutions to bring the house into this century. The built in bunk beds, wide hallway, and beautiful kitchen are interior highlights. The back porches on two levels and the landscaping in the rear put the house over-the-top.

The final home we made it to before heat forced us to retreat was the tour of unit 210 in Brownlow School Lofts. For those of you who know me or have followed this website in recent years, you know that Brownlow was the final home for my brother who died in 2019. What I didn’t realize until half way through the tour was that it was his former unit included on the tour. I’ve featured it before when he lived there and the home was included in the Old North Victorian Home Tour.

It was strange re-entering the home which I hadn’t seen since I’d sold it on behalf of the estate. That said, it was life-affirming to see the home so beautifully and brightly decorated. I enjoyed talking to the new owner whom I’d barely met at the sale as it was in the early days of the pandemic.

The building was constructed as a school in 1913 and served that function until 1996. In 2007 it was purchased and repurposed into condominiums. It now includes 35 residential units ranging in size from 570 to 1,431 square feet. It includes a small work-out facility and a roof-top deck which is currently being refurbished.

Unit 215 has twelve-foot ceilings, multiple eight-foot windows on the front and back of the unit, with two bedrooms and two baths. The current owner has converted one bedroom into an office and has completely renovated the master bath.

Sadly, we didn’t make it to the other homes and gardens, all of which I’m sure were lovely. It’s a great neighborhood and worth exploring, even if you simply stroll down the streets, which I’ve enjoyed many times in all seasons. Be sure to catch the tour next year.