Fourth and Gill Tour of Homes and Secret Gardens 2022, Part One 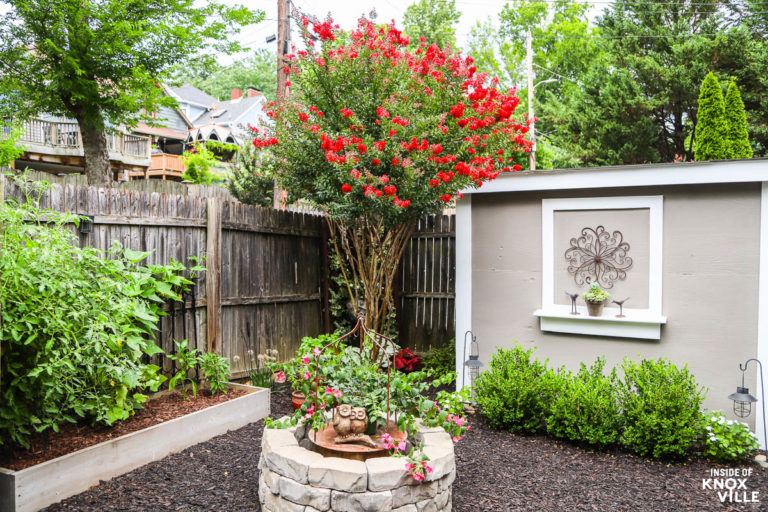 I would like to express a word of thanks to the Fourth and Gill Neighborhood Association who presented their thirty-second tour of homes and gardens this past Saturday. The tour was wonderful, as always, but I’m struck by the longevity of the event and the work it takes to put it on year-after-year, as well as the willingness to open homes, and this year gardens, to the public.

As always, a special thanks goes out to everyone who helped put the wonderful tour booklet together. Particularly, I appreciate the work Arin Streeter puts into assembling the history of the neighborhood and the homes. Thank you to the home and garden owners whose properties we visited. I did my best to do your homes justice in the photographs, but crowds sometimes kept me from getting the best photos of some of the gorgeous spaces.

We were joined by friends from Florida and enjoyed showing them the beautiful neighborhood. We made it through most of the homes before the heat convinced most of us it was time to call it a day. In my party’s defense, I had them at sweaty bike races Friday night, a steamy Market Square Farmers’ Market on Saturday morning and I was threatening them with more sweaty fun on Sunday. Thanks to Gordon who spotted a group in need of a quick ride toward our airconditioned vehicle and to Gina for giving us a quick rescue in the KISS Caboose.

The first stop for us was Central United Methodist Church, pictured above. Upon completion in 1927, the nave was Knoxville’s largest auditorium with a seating capacity of 1,600. The massive pipe organ, purchased in the 1950s to replace the original organ purchased in 1935 from the Riviera Theatre, is a striking feature of the space. The building was added to the National Register of Historic Places seventeen years ago.

The Queen Anne home at 613 Luttrell Street was built by Thomas Flenniken in 1887 as a rental home. Even in 1905 when it was purchased as a single-family residence, fewer than half of Tennessee households owned their home. Strikingly, from the time of that $2,000 purchase until the death of Mary L. Grissom in 1962, the mother of the family lived continuously in the home.

It has continued to have long-term owners, with James and Maggie Parks owning the home from 1963-1996. The current owners are finishing their first decade in the home.

Striking features of the interior of the home include the beautiful tiled fire places, including two in the front of the home which were nearly identical. The built-in cabinetry on the top floor surrounding a small fire place created a cozy space.

The art throughout kept grabbing my attention. The series by Brian Pittman and Amos Oakes is gorgeous, though I’m biased: I owned three from the same series. The De La Garza painting in the front room and the Yee Haw Hank Williams poster let me know right away we were in for a treat.

Next we dipped into a series of gardens, all of which were beautiful and most of which were tucked away behind houses or behind walls for privacy. It was easy to imagine sitting outside when the weather is nice and enjoying a cool beverage.

The garden at 815 Luttrell started in the front and flowed via a pathway to the rear. Included are raised beds, garden art by Gerry Moll and “containers for growing anything from herbs to hops.” Just across the street at 814 Luttrell, also pictured above, the owners took “a patch of grass,” and transformed it into a space for family, friends, and children to enjoy. With fruits, vegetables, a bonfire, and a hammock, what else would you need?

From Luttrell, a short walk down an alleyway led to the delightful small garden at 515 Lovenia. It’s a small space, but another great spot for relaxing. It’s filled with little surprises just out of sight of the street.

We’ll end with another home I love an in which Urban Woman and I have visited its owner and our friend Nina. 610 Caswell was built in 1905 and, after a series of renters, was purchased in 1922 by Alphonso and Carri Reichart Kromer, immigrants from Germany, for $4,400. The home remained owner-occupied until 1969 when it was sold and soon returned to a rental home. After a long decline and attempts to restore the home, it was sold in a foreclosure. The current owner purchased the home in 2019 and brought it back to life.

There are far too many details to mention, but the artwork is striking throughout (one piece pictures a love of my long life which long-term readers will easily spot). It starts with the beautiful railing on the stairwell, constructed by Derek White of Bird on the Wire Studios.

Every small nook in the home has been filled with built-in shelving, art, or a couch and chairs for a cozy sitting spot. The beautiful kitchen leads out to a large, covered back porch with gauze curtains and perfect furniture for sharing wine and cheese with friends. While other homes are nearby, it feels private and quiet. A small second-floor balcony has been added which affords views of the Great Smoky Mountains in the distance.

I’m stopping there for this installment. We’ll look at more homes and gardens in a second part tomorrow.