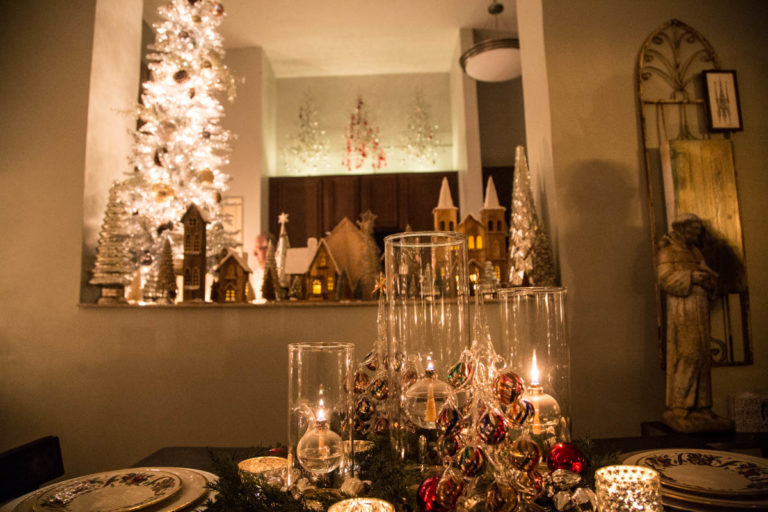 I always look forward to the Old North Knoxville Victorian Home Tour. It’s a magical blend of holiday decorations and fascinating older homes. Sometimes homes that are still evolving are spotlighted. It’s a great blend of what was, what is and what is to come for one of Knoxville’s special neighborhoods. The information in this article is thanks to the great research and writing completed for the tour booklet.

This year’s tour started at 405 East Oklahoma (Circa 1911) and featured a Queen Anne home which was completely renovated in 2016, but which retains many of its original features. Southern Railway employee William Thomas Moody and his family were the first occupants. The house was built as a rental and, as a result has had many working-class occupants, including Deputy Sheriff T. B. Kirby and his wife Lucy from 1925 – 1931.

Known as the “Kyker House,” 254 East Oklahoma was built around 1907. It is also a Queen Anne cottage. James E. Kyler and his wife Lydia built the home and lived in it. He worked for many years with Southern Railway and, in an interesting twist, his great-granddaughter, Andie Ray and her husband, Noel, built a home a block away over a century later.

In its modern incarnation, the home has been lovingly renovated and remodeled. One fascinating feature is the unusual center-floor spiral staircase down to the garage, a portion of which has been remodeled into a bar/living area. With comfortable seating and a soft ceiling, it’s a snug little hideaway.

The third stop on the tour is a much larger, rambling home featuring beautiful columns on a wrap-around porch a turret and much more. Built around 1895, it’s a few years older than its tour-mates. It is also a Queen Anne home and its restoration took more than one owner. That is likely because the massive changes made to the home made the road back a long one.

Renovations covered the years 2004 – 2012 and resulted in transforming the house from the multi-apartment dwelling it had become, back to a single-family home with much of its original architectural detail restored or replicated. It serves as a testimony to the determination of the people who sacrifice years and large amounts of money to restore something they feel is important.

St. James Episcopal Church was the fourth stop, but it wasn’t open on preview night when I attended. I’ve also photographed it before, so you can see it if you search for previous tours on this website. The fifth stop was at Brownlow School, which was originally Glenwood School, built in 1913.

The school was later re-named in honor of Colonel John Bell Browlow, son of Parson Brownlow and an officer in the Union Army during the Civil War. He returned to Knoxville in 1904 and developed some of the area surrounding the school.

The school itself sits at the northern edge of the Fourth and Gill neighborhood and just across the street from the Old North neighborhood, but has been adopted by both for touring purposes. Elementary students left in the 1990s and the school’s interior was used for the filming of October Sky. It was developed as condominiums in 2009. This beautifully decorated condo just happens to also be home to Urban Brother.

The next stop was a more simple home at 138 Leonard Street. Built in 1900, its first resident was Thomas B. Hughes and his wife Sarah. A Welsh immigrant, he worked in the lumber industry. The home was a rental home for many years and now retains some of its original touches, along with a few modern touches, such as the stained-glass window and larger window on the original porch.

The final home shown in the first installment of this two-part series was built in 1900 at 134 Leonard Street. Like several of the others it is a Queen Anne cottage, coming in the late Victorian period and, as a result, it reflects the shift toward slightly less ornate construction. The home was a rental and hte first occupant was Mrs. Emma Rice, a single mother and school teacher who retired from the Knox County Schools after working at North Knoxville High School, a one mile walk from her home.