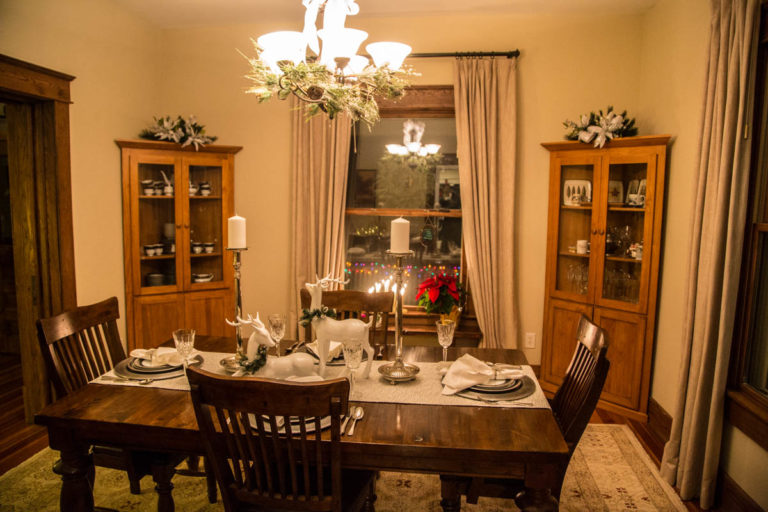 This is a continuation of the Old North Victorian Holiday Home Tour. You’ll find the first part here.

The tour continued at 122 Leonard with the first Craftsman home on this year’s tour. Built just a little later (this one in 1915), these homes are notably less ornate than the Victorian and Queen Anne styles that preceded them. Built for function, with generous porches and and straighter lines in the detail, they became the new architectural style in demand in Knoxville and elsewhere.

This home has been lovingly restored and featured museum quality quilts on the walls and beds. It also highlights the beautiful fireplaces to be found throughout the neighborhood and a surprising splash of color in the shower tile. The workmanship of the interior is easy to spot, as was the point in craftsman homes.

This was one of the most interesting homes on the tour. It’s beautiful, of course, and large, with a downstairs divided into two parts, with the back portion being used as a short-term rental (and for visiting family), plus a spacious upstairs. Built in 1908, it was built in the Victorian style as that architectural style began to wane.

The builder and first resident was Samuel T. Abbott who sold “meat and other goods.” A funny note in the narrative on the tour guide was that this designated him officially as a “huckster” according to city records. He lived in the home into the 1930s, which is when the history really gets interested: It was the first home for Rose Mortuary. Founder, Frank L. Rose moved his family into the home in 1932 and opened the business there. The business was moved to a larger space at the corner of Broadway and Glenwood in 1935.

The lovely home features beautiful hardwood floors, fireplaces and mantels. But I asked what we all want to know . . . “any evidence of the afterlife?” The couple said there was only one incident. Upstairs bathing their child, they both distinctly heard someone walking up the steps and, as you might expect, there was no one there. Definitely a kernel of an event that needs to be, um, expanded into a full blown ghost story!

1319 Grainger also has an interesting background. Parts of it date to 1855, which makes it one of the earliest homes in the area. Originally a four-room farm house built and lived in by George Peters and family, George Barber was hired in 1885 to “remodel and enlarge” the home. The result is what you see today, incorporating Neoclassical elements, it is approximately twice the size of the original home. The family of millers operated a mill just behind the home.

The corridor immediately inside the entrance, featuring a beautiful staircase at the end, is striking as is each of the rooms to the left and right. A lovely piano serenade was playing as we entered and the tree and fireplace added beautiful touches to the tableau. Also eye-catching were the chandeliers hung throughout, including both a crystal chandelier and ornate crystal sconce in one bathroom alone!

I personally really enjoy having homes like the next one on these tours. It’s fun to see the beautiful things that have been done to many of the homes, but what did they look like before that process was begun? What are the challenges to returning these homes to showplaces? 1424 Freemont offered just such a glimpse. It’s not for the faint of heart.

This once beautiful and potentially beautiful once more home was owned for many years by artist Ron Williams who struggled through his life in many ways attempted beginning in the early 1990s to restore the home, though it deteriorated some in his later years. It was sold upon his death and Anna Lawrence and Sean Bolen are bringing it back to life. You can follow their renovation project both on Instagram @1424FreemontPlace and Facebook @TheRonWilliamsHouse.

The home was built in 1911 by Annie McDonald, a Maryville College graduate and business woman. She lived in the home for over forty years until her death in the mid 1950s. She worked until retirement at age 80. The home is a “somewhat quirky example of the post-Victorian, classic American Foursquare style.”

The final home on the tour, and also one of the most lovely, was at 1300 Kenyon. The 1911 bungalow “exhibits Neoclassical architectural detailing and is elegant from the entry and throughout. As you can see from the photos, it is nicely furnished, beautifully decorated and the hardwood floors and other architectural features found throughout make the home sparkle. (According to the sign in the yard, it is also available – so jump on that!)

The interesting story here is that the home had been owned for some years by a person in California who had allowed the home to deteriorate. Knox Heritage became interested in purchasing the home to rehab and sell in order to not only save it, but to spur surrounding development and, hopefully, bring the block back to its former beauty.

After some difficulty, the owner was located and agreed to sell. The renovations began and purchasers were identified. Then a weekend fire and its attendant water damage forced the project back to the beginning. The purchasers agreed to wait and the home ultimately was sold to them. And the dream of spurring more restorations on the block? That seems to have been realized as the adjacent home and several on the other side of the street have also been brought back to life.

Restoring a home isn’t easy, but once you enter a relationship with an older property — and it is very definitely a relationship with all the attendant ups and downs — there isn’t much that is more rewarding than to watch it come back to life and know that you had a hand in that happening. A special thank you to everyone who has done so and also have allowed the rest of us a glimpse inside.