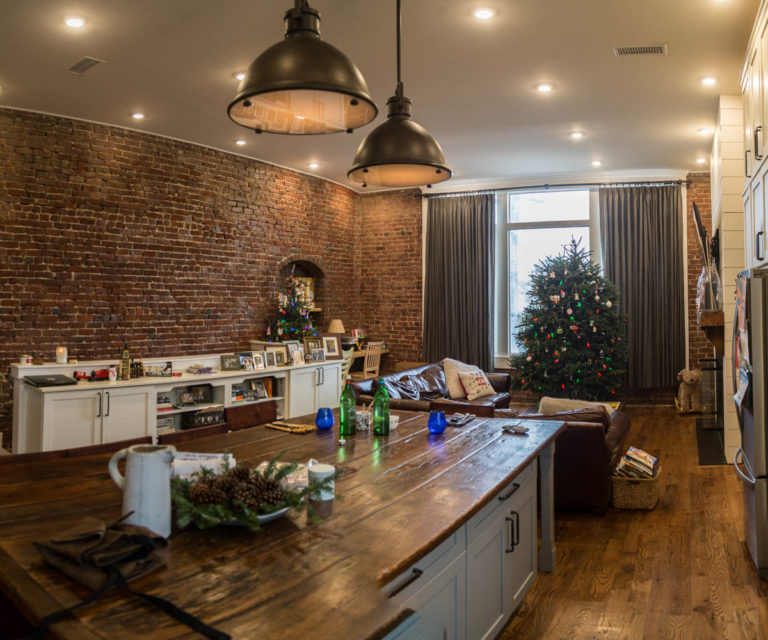 Chef Jeffrey and I had talked about the small, unassuming building he’d purchased across from the downtown dog park for at least a couple of years. He’d invited me to lunch in his new home for food and conversation and a look at the new space. As I walked through a light snowfall, I wasn’t sure if it was the promise of a private lunch made by Jeffrey or the look into the new home that had me most excited.

If you take a dog to the dog park or are prone to wide-ranging walks, you may have noticed construction at 209/211 South Central Street. Workers have been coming and going, noise and dust emanating from within and the clear signs of changes on the way have been obvious. You might not notice it if you walked by today. Most of the facade is boarded, marked by the requisite graffiti. But you might notice a beautiful door marked “209.”

As I stepped inside that door, which Jeffrey opened remotely from above, a stairwell led upward to the main floor of the residence. The building includes two floors, but also has a mezzanine level on the second floor, making the interior seem like three floors. The main (second) floor of the living space includes the kitchen and living area, master bed and bath and a very large walk-in closet. The children’s rooms and bathroom are located on the mezzanine.

It wasn’t always an accepted plan that the family would move downtown. They had a comfortable home in west Knoxville with about 2600 square feet. The family was growing. But Jeffrey was working downtown at Crown and Goose and so was his wife. They also found themselves drawn to activities, events and the growing list of cultural attractions developing downtown.

They sold the home and bought the building in which they now live, thinking it would be a quick transformation into their downtown urban dream home. Jeffrey started OliBea and the family settled into a very small (800 square feet) home under the 100 block. A third child was born.

Plans met the reality of codes, construction delays and financial realities and the project stretched out for nearly three years. Jeffrey says having the five of them share 800 square feet was the best thing that could have ever happened. Jeffrey likened it to being college roommates with all the fun and discomfort that carries. He laughed recalling that he only had inches of clearance above his head to the ceiling in the small place.

They realized they didn’t need as much space as they thought and that reducing from the 2600 square feet they’d had would not be as difficult as they thought. The children and the family became closer, loving downtown walks (they’ve given them names like the “Calhouns Walk”) and downtown fun, they knew they’d made the right move.

They’d placed large amounts of belongings in storage but, without the use of those items for nearly two years, by the time the home was ready, they’d re-calibrated their perception of what they really need. Now that they’ve moved into their new home and enjoy 2000 square feet, it feels like more than enough. Though the children have two rooms, most nights they wind up in one because they want to be together.

After touring the beautiful home, we settled down at the eight-foot by four-foot custom built table for a warm winter’s meal. The sandwiches were made with bagels from Paysan, stuffed with multiple cheeses, greens and bacon with the entire sandwich sauteed on the stove. Sweet potato soup with a touch of bacon and greens topped off a delightful ending to our conversation.

But what about the rest of the building? What about the boarded-up first floor? We’ll leave that for Monday as Jeffrey announces major moves and big plans.