Nief-Norf Brings an Unsilent Night to the City 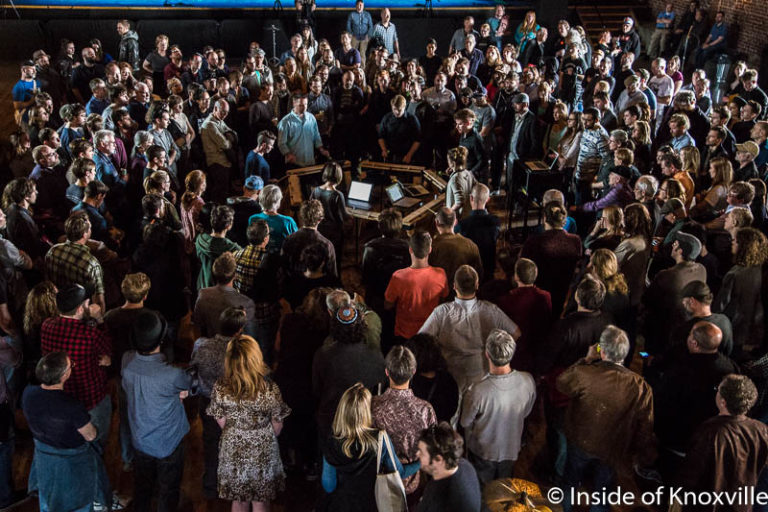 Something very different from your routine Christmas program happens each year in Knoxville. A similar performance happens in cities around the world. It started in the winter of 1992 when Phil Kline, “had an idea for the combination of artwork combined with holiday caroling.” The result was an electronic piece, Unsilent Night, lasting forty-five minutes and divided into four parts which could be played simultaneously.

After that first New York City performance in Greenwich Village, performances spread to boom-boxes all over the world. The boom-box has since largely been replaced by digital files played via the app designed for the event. It’s an interesting art concept inviting non-musicians to be a part of a moving (as in perambulating) art installation.

The event is a part of the annual season of performances presented by local performance group Nief-Norf. The group is an evolving list of musicians headed by Andrew Bliss, Director of Percussion in the University of Tennessee’s School of Music. He describes the group as a, “contemporary music ensemble.”

Andrew founded Nief-Norf in 2005 and founded their summer festival in 2011. Formerly a professor at Furman, he started the festival and group there, but moved both with him to Knoxville in 2015. Nief-Norf (a 501(c)(3)), presents the festival annually with fifty performers, ten composers and twelve performances in fourteen days.

The group generates funding through their summer festival, donors and grants and has thus been able to hire part-time employees. Andrew serves as Artistic and Executive Director. Of the group, he says, “We celebrate all contemporary solo and chamber music, playing all styles of western art music.” Most of it, he indicated, is by living composers. He describes much of it as, “minimalist, European avant-garde, theatrical-centered works.”

The performance ensemble which operates as a two-to-four piece unit, up to a twenty-piece unit, retains its flexibility to perform a wide-range of creative projects. This year is their first to announce a season of performances, which started with the Emporium in August, UT in October, Unsilent Night this Friday night, the Square Room in February, Big Ears in March and Relix in April.

You might have caught the Big Ears mention. It really has its roots on Andrew’s honeymoon in Alaska. He did what anyone would do, right? He reached out to his favorite composer there, John Luther Adams. Adams agreed to come to Knoxville for a performance of Inuksuit. The two agreed to collaborate and the resulting Knoxville performance in 2014 happened to fall a week after Adams won the Pulitzer Prize for the piece.

Subsequently, Ashley Capps (of Big Ears, Bonnaroo and AC Entertainment) approached Andrew and they became, “musical friends.” The result was that the two began to work together and Nief-Norf has become a staple at Big Ears. In 2016 the group brought John Luther Adams back, this time to Big Ears where his works were featured.

The culminating performance was his Inuksuit which was written for 9 to 99 percussionists. Close to the top-end of that number performed throughout a forested area at Ijams to rave reviews from the thousand or more people dispersed throughout the woods to enjoy the work. I can attest, it was a powerful moment.

While performances like the above stretch my musical understanding, it isn’t so for Andrew. “The music we play is the musical language I speak every day. It doesn’t feel weird or strange to us. It’s a perfect collaboration and friendship.”

The Kline piece will be performed this Friday night and you can join in. All that is required is to download the app (preferably ahead of time – it takes minute), employ some manner of external speaker (they don’t want the poor sound quality of a cell phone) and join them at the Sunsphere at 9:00 PM. There is a pre-performance gathering at Casual Pint (6:30 PM) and all the information for joining in can be found here. It starts and ends at the Sunsphere and lasts forty-five minutes.

Andrew says he is hoping to well surpass a hundred participants this year and he would love to see more people involved. “The four tracks play randomly, but are sympathetic to each other and include choral, vocal, bells and rhythmic patterns.” He likens it to to a twinkling, “holiday tree lights display.”

This is the sixth year for a Knoxville performance and we will be joined by thirty-nine cities world-wide. So, join in for a pre-performance libation, sometime around 7:00 PM or join in for the performance. Not into performing? Watch for the large group carrying a beautiful noise around the city this Friday night. You can contact Andrew with any questions at contact@nief-norf.com. Also watch for their upcoming performances.