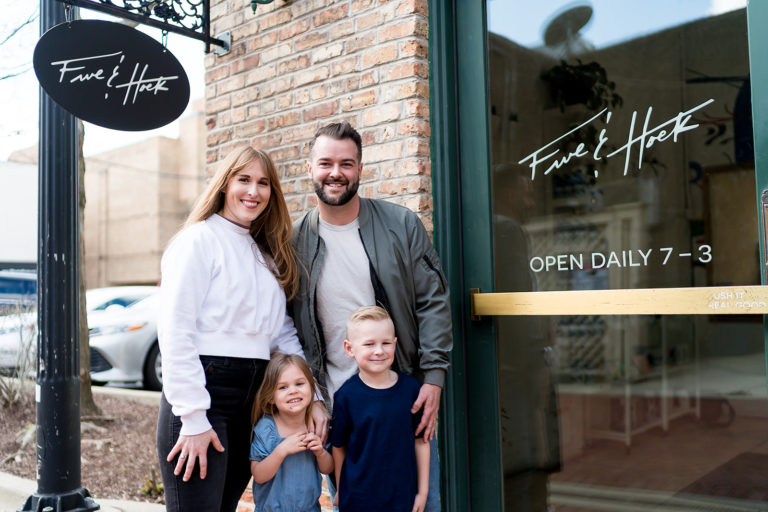 Last week I announced a Loyal’s Barbershop coming to 204 West Magnolia Avenue. This week brings the news that another of the three retail units in the same building, Mews II, will be taken by Tyler and Beth Fivecoat, and their business Five and Hoek (pronounced “hook”) coffee shop to 200 West Magnolia, on the eastern end of the retail space in the building. This will be the second location of Five and Hoek, with the first continuing in Wheaton, Illinois. I spoke with Tyer to learn more about the family and the business we might expect.

Tyler is from Aurora, Illinois and grew up there, about 40 miles west of Chicago. Beth grew up in Remus, Michigan. The two met in college in Chicago at the Moody Bible Institute. After getting their degrees and getting married in 2013, Tyler attempted to sell life insurance for a time, but was miserable. When their friend Erich Goepel offered to let them join him as partners in River City Rosters, which he had started in 2010, they agreed.

Over the next years the business grew, and they included an additional partner for a season, their friend Aaron Hoekstra. The group decided to move the business to Wheaton, where that location remains, and eventually changed the name to Five and Hoek after each of their last names. When Aaron exited and moved to Chattanooga, they kept the name.

The company returned to three owners and Tyler said that Beth operates as CEO and handles staffing and day-to-day operations. He focuses more on product, especially the coffee drinks, roasting, and the quality control side of the business. Prior to the advent of the COVID-19 virus, the business developed to the point they offered baked goods and had an on-site baker. They developed a full menu and a brunch menu.

When COVID-19 hit, they were given serious restrictions on how they had to operate. They simplified their menu to include coffee, healthy smoothies, and snacks. They reconfigured the business to be take-out only, enabling the business to continue to thrive.

Like true entrepreneurs, they also began to think of expansion. With the flagship location secured, they began considering a move to a different part of the country, wanting “somewhere beautiful and warmer . . . a place our kids would grow up loving. We love the outdoors.” And so the quest began. The primary contenders were Chattanooga where a cousin and their friend and former partner, Aaron had settled, and Asheville, set in the heart of the mountains.

Tyler had often visited Tennessee when he was younger, visiting his grandmother who lived in Johnson City for thirty years. He said he was a Vol fan his whole life and, where or not that had to do with it, he suggested they include Knoxville in their search, which they did. They soon eliminated Asheville from the list, which Tyler said, “felt a little more touristy.”

With Beth in agreement, the couple took four long-weekend trips exploring each city and considering its character and the business opportunities each presented. Chattanooga seemed to have developed in patches and they liked the cohesive downtown area in Knoxville. They loved the proximity to the mountains and liked the pace of the city, which seemed slower than their Chicago suburb. They took note of the pride that local citizens seemed to take in the town, and it all added up to the place they wanted to be. They and their children (Judah, age five and Erin, age three) moved here a month ago. 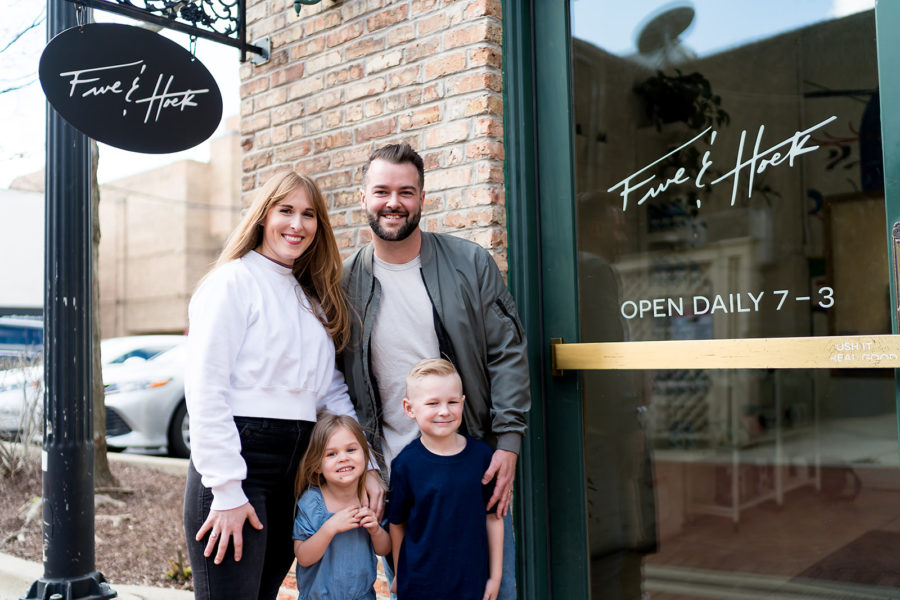 The business they will bring is a roastery and coffee shop. They’ve roasted their coffee on site at the other location since 2010. Tyler said about 80% of their coffee is now direct trade and he enjoys working with growers he knows and being able to see the product from “seed to cup.”

The new shop will have a 20 lb. roaster which will be viewable from a standing bar in the rear of the shop. While sipping a coffee or espresso, patrons can learn as much as they’d like about the process behind the drink. They also anticipate public tastings to further the educational component. It’s something they’ve done at the previous location but had to curtail in 2020.

The shop is relatively large for a coffee shop, with about 2,000 square feet. Surrounding the coffee bar in the middle, seating will be spread throughout, with a large community table in the center. Tyler’s brother-in-law is fabricating stools for the window bar in the east-facing window. Also included will be built-in bench seating and a corner bench with tables in the northwest corner of the space. The north-facing window will be fronted with tables and chairs.

The shop offers their own house blend called “caravan,” as well as an espresso blend, five decaf offerings and more than one partially caffeinated blends. They also offer (currently eight) single-origin coffees which offer unique taste-notes depending on whether they’ve been imported from Ethiopia, Honduras, or elsewhere. 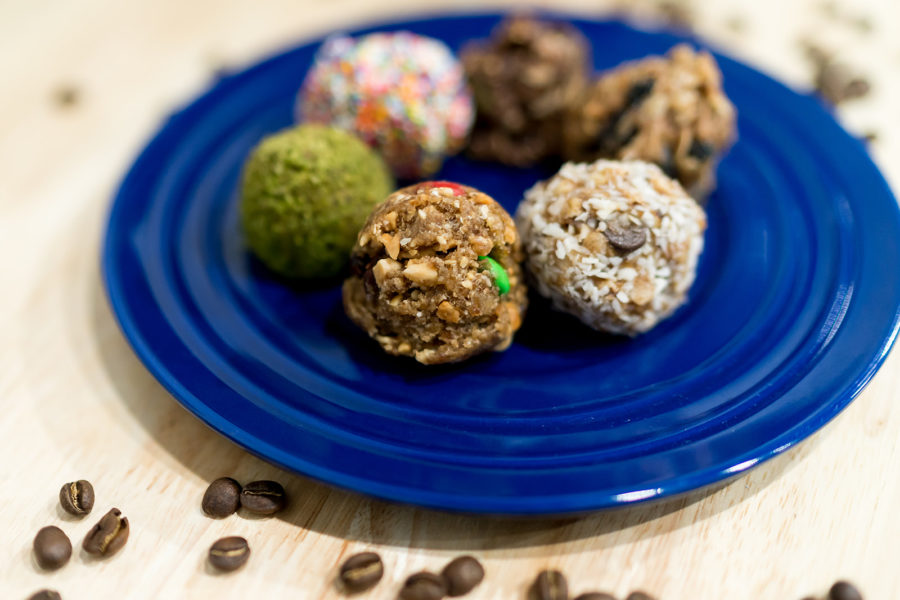 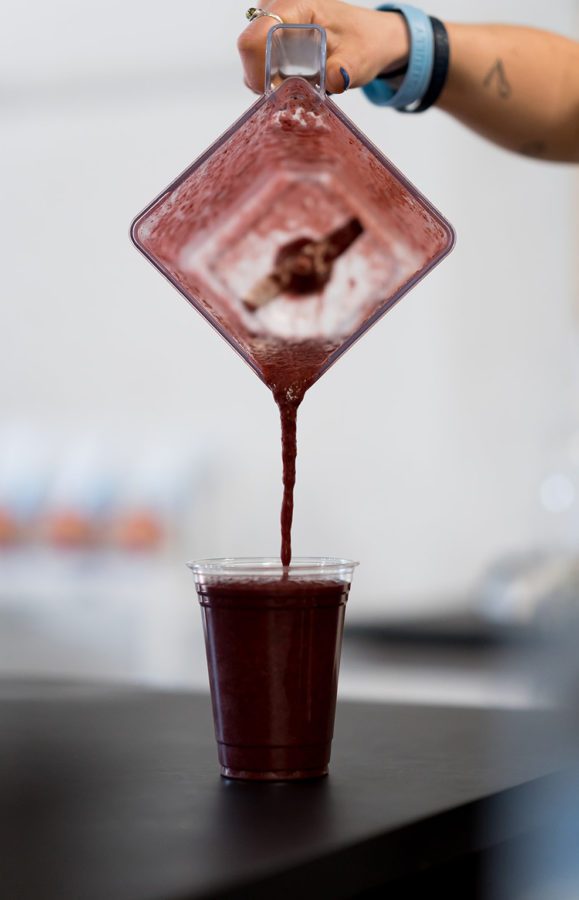 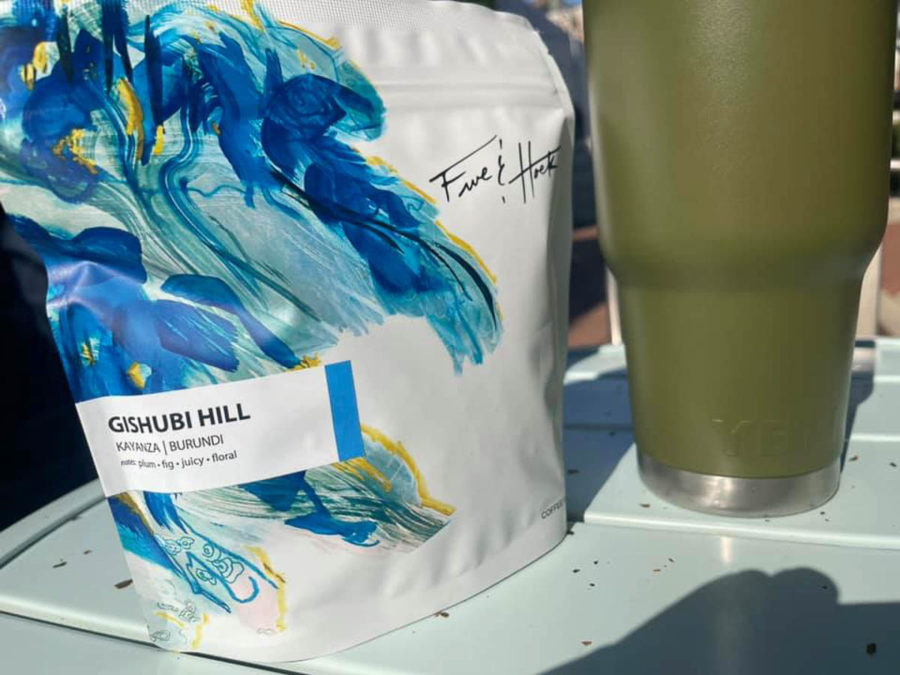 Additionally, they have a series called the “Slow Sip Squad,” which they centered around Sasquatch just for fun (No, they do not believe Sasquatch is real, Tyler assured me. I told him, “Not to worry, your current U.S. representative does!”) The idea is that these are rarer (like Sasquatch!) varieties, or they may involve unusual processes or famous and award-winning coffees that are hard to find. They are also soon to release their own cold coffee in cans, which will be available in the shop. Tyler said they are “snapchilled” in order to avoid the dilution caused by ice.

They also offer “all organic, meal replacement” smoothies featuring recipes developed by Beth. They usually rotate four or five different smoothies, including one for children. All ingredients are natural. Additionally, you might expect “Knox Balls,” which are about big enough for a couple of bits and cost $2. The focus is on grab-and-go. They will also serve milkshakes, including some made with chocolate and espresso. They are hoping to locally source the milk for these. Finally, on the drink menu, you’ll find teas from Spirit Tea out of Chicago, another company which directly sources their product.

Other products will be for sale at the shop, including whole-bean bags (they will grind upon request) of their coffee and their mocha caramel. All their caramels are made in-house. You’ll also find the Spirit Tea offered on the shelf, as well as by the cup.

Tyler said they are excited to get to know the community and hopes to be a part of collaborative efforts with other local roasters, as they were in Chicago. He pointed out that while there is competition, he feels there is room for everyone, and they are “happy to be a part of the already great coffee community in Knoxville.”

He’s hoping to offer a fun experience where you’ll probably see the kids running around. He said they don’t take themselves too seriously and he hopes that is communicated in the shop.

You may bump into them before they open, as he said they may do some sort of pop-up events to start introducing themselves. In any case, he’s hoping you can drop into the shop by sometime around early September.