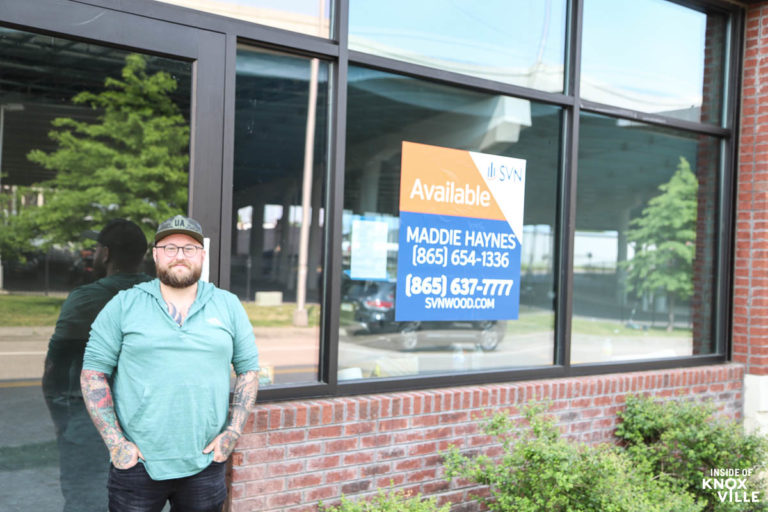 Nick Kitsos will soon open a barbershop at 204 West Magnolia, the first retail to enter the ground floor of the Mews II building. He’s been visiting Knoxville for about ten years because his wife has family in the area. He said he’s enjoyed watching the changes and when they decided to move here, he had one ask: He said if they were to move here and he opened a barbershop, he wanted it to be around the Old City. He said finding a small retail space wasn’t easy.

Originally from just outside Columbus, Ohio in the small town of Clintonville. His dad operated a small dental lab with his grandfather, while also working at OSU. His mother worked in banking and now works in HR at OSU. When he was thirteen the family moved to the country to have more space to fish and camp. He lived there until he was eighteen when he moved back to the city.

He tried college, but found it wasn’t for him. He married Erin, who had been his girlfriend in high school, in 2009. They lived in houses that needed fixing up and flipped them after doing repairs. They, along with their son Finn (age 6) and daughter Emma (age 5), currently live in Andersonville where they have about eight acres and they are upgrading yet another house. He’s happy to have the space and to be near the Norris Lake, while at the same time being thirty minutes (twenty-eight to be precise, he told me) from downtown Knoxville. His wife works in West Knoxville in the new Knoxville Center for Behavioral Health managing medical records.

Nick managed luxury apartments for eight years, but he realized that wasn’t what he wanted to do. He had a creative side that needed expression. He took photographs and explored photographing weddings and real estate. He worked real estate for a while. He grew out a beard and started going to cool barbershops and was encouraged to try barber school. With the support of his wife, he became certified in 2019.

He found he was good at it and rented a booth in a barbershop. He quickly formed a base of around 600 customers and said if the cut their hair once, there was a strong chance they would come back. He worked hard to get better and was contemplating having his own shop when they decided to move, and he set the wheels in motion to open a shop after they moved. Just three weeks after moving to the area, he’s watching his space be built out and is excited to get started.

He’s leased from Jeffrey Nash and Courtland Group after looking at multiple locations. After checking it out, it seemed like the perfect area for his budget and needs. He likes being in an up-and-coming area.

He said that he might start out working alone, but he hopes to have a couple of partners out the gate. He said he feels like it’s easier to develop a fun vibe, which is something that’s important to him. Eventually, he would like to have as many as six total barbers in the space, including himself. Interested barbers can call him at 614-352-8368. You can also follow him on Instagram.

He’s hoping to take possession of the space at the beginning of June. He’s hoping to have the equipment moved in and be ready to go in mid-June. He said, “I want to have the vibe set for people to come in.” He said he wants to have a “super crew.” He said it is extremely important that everyone enjoy working together. Expect good music, hot towels, a few local touches (he hopes to connect to local organizations), and a lot of positivity. He said to picture old-school barbershop with a modern, alternative vibe.

He thinks you’ll enjoy the atmosphere, but he promises you’ll get a great haircut.