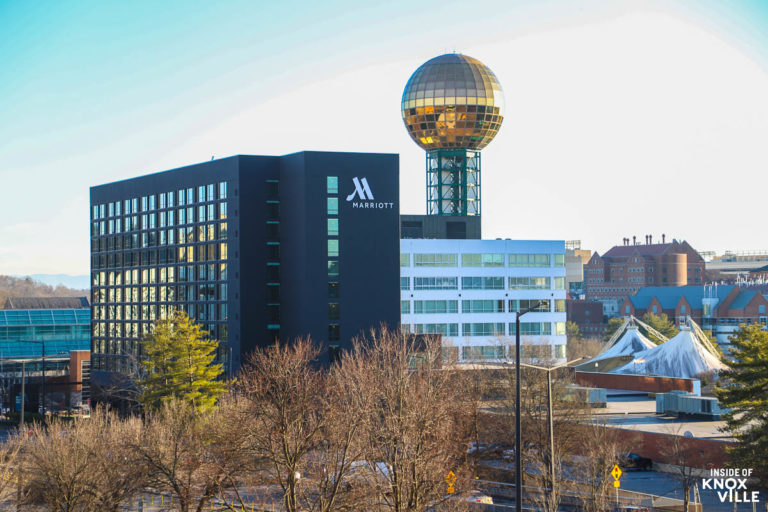 Rockbridge, which also owns the Tennessean, has opened a new Downtown Marriott on Henley Street. The hotel began accepting guests last week and is celebrating with a ribbon cutting ceremony today. Located between the World’s Fair Park and the heart of downtown, the 302-room, full service hotel no longer resembles its previous incarnation in any respect.

Nancy Click with Mayfield Group Public Relations and Robin Holbrook, Director of Sales and Marketing for the two hotels gave me a tour of the new space. While much of the art and the maker products are not yet in place, the transformation since I last toured is incredible. McCarty Holsaple McCarty Architects, Blaine Construction, and New York-based interior design firm Stonehill Taylor developed a completely different hotel.

The heart of the two hotels is the Maker Exchange and beautiful display cabinetry has been installed and awaits local work being coordinated by Dogwood Arts, with design help from Robin Easter Design. The exchange space is a public space and all are welcome. The hope is to provide a space for the public to enjoy, while introducing visitors to the city to local art and other work.

The centerpiece of the room is a giant hearth which can burn gas or wood, surrounded by comfortable seating for working or lounging. A coffee shop (serving local Vienna Coffee) is located off this space and between the two hotels. An independent restaurant and bar are located overlooking the park. Unfortunately, they were in the middle of a professional photo shoot, so I was unable to photograph those for this article. A public game room is also located just off the restaurant and bar.

The escalators that previously ran from the upstairs lobby to the ballrooms have been replaced with a grand staircase backed by a colorful mural. The steps lead to a completely transformed event center with multiple ballrooms for groups of different sizes. The foot print of the entire area was expanded as small meeting rooms were removed and the walls were pushed forward. 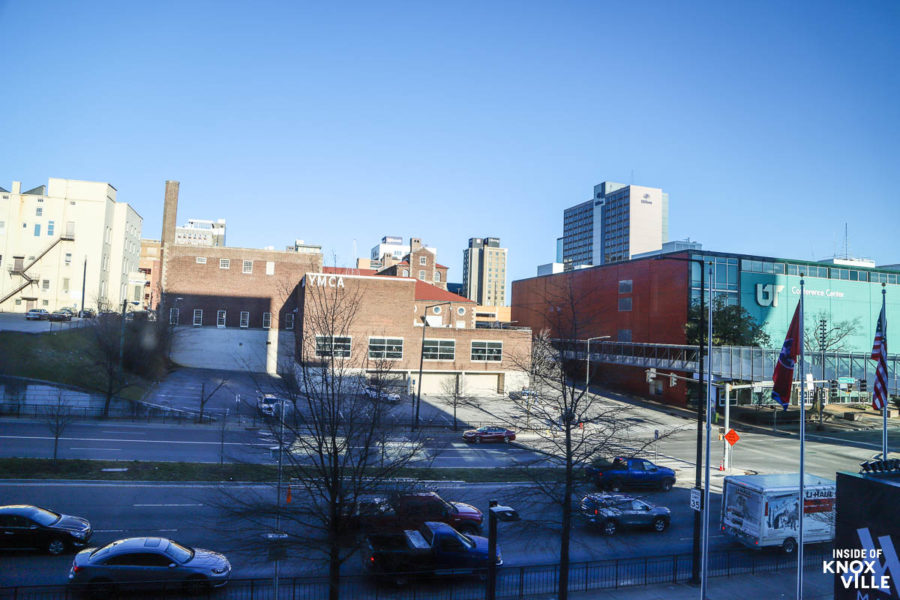 The hotel also features a state-of-the-art fitness room (web-based equipment and Pellatons are on the way) and a luxurious VIP lounge with light foods, cocktails, and more. All rooms feature new, large windows with great views of the city, the park, or both. The luxury suite opens up into a two-bedroom, two bath space with a living area in between and a small kitchen area. The suite clocks in at over 900 square feet. The standard rooms are smaller, but also nicely done.

You can check them out on their website and on Instagram. While the ribbon cutting today was mostly for media and city officials, the grand opening later this spring will reveal the maker space and artwork throughout the lobby.