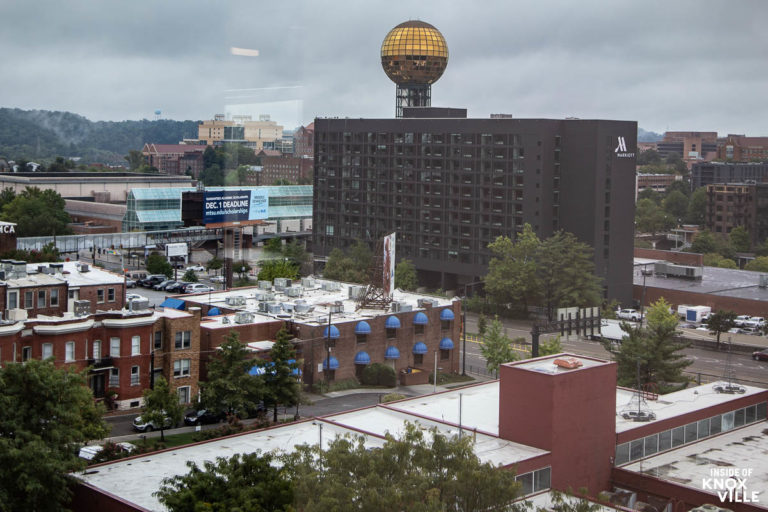 Constructed as a Holiday Inn in anticipation of the 1982 World’s Fair, the hotel, along with the adjacent Tennessean came under new ownership in February 2019 and the former Holiday Inn is being changed into a Marriott. Ohio-based Rockbridge Capitol, the new owners, with the help of MHM Architects and Blaine Construction, have the hotel undergoing a complete transformation, with the intention of completion by the end of this year.

I met Skip Adams, Director of Operations for both properties to tour the worksite and to learn more about the plans. We donned hardhats in The Tennessean, which, as a recently constructed property, is not being renovated and walked next door. The group operated the hotel in its final year as a Holiday Inn and had planned to close the hotel for renovations, but as the pandemic began, they closed just a bit ahead of schedule and began work.

The hotels share an entire team, with the exceptions of housekeeping and restaurants. The space which was the former Windows on the Park and a part of the Holiday Inn, will now be a ballroom addition for the Tennessean. The new ownership group operates The Tennessean, but the condo units on top remain under private ownership.

A new space has been developed along the park side, which will be a restaurant and bar for the new hotel. Large, moveable windows overlooking the park will allow for the restaurant to be open-air, with mosquito netting, during good weather. Exterior awnings will be replaced. Also in an adjacent area will be an upscale game room with billiards, shuffleboard and more.

The large open space, which once housed the World’s Largest Rubik’s Cube (now in the possession of the Convention Center), will be converted to a Maker’s Exchange. A large fireplace has been added to anchor the space which is anticipated to host Maker gatherings to exchange ideas, host tutorials, etc. The group is developing a partnership with local makers where their work can be explored and engaged by the community. The Marriott ends at the top of the steps where the check-in will be located (the same location as the Holiday Inn check-in) and the Maker Exchange is the connecting point between the Tennessean and the Marriott.

The Marriott will have several more rooms than the previous version of the hotel, coming in at 302 rooms. The space from former interior pool and work-out room were converted to add rooms. An M-Club, standard in Marriott Hotels, is also being built, providing a more private lounge and snack area for Marriott Reward Members. It will include a small private bar, with a bartender making fresh mixed drinks.

The downstairs event space, specifically the area beneath the previous escalators is also being renovated and will be available for use. The concourse area in front of that space will become open-air space with outdoor seating. A grand staircase will replace the escalators. The larger space on the north end of the building remains under management of the City of Knoxville.

I hope to have a follow-up when the hotel nears completion.