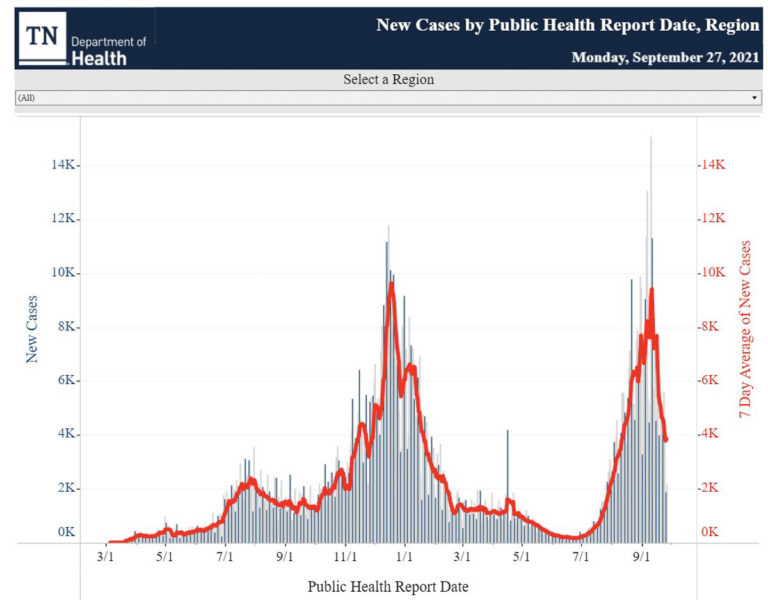 After an injunction placing Knox County Schools under a mask mandate once again, the city spent a nervous weekend awaiting the student’s return to school. After closing Monday to prepare, school opened today with little turmoil. Teachers, rather than students, greeted most elementary students, police were on hand, and only scattered protests were seen. Protestors were removed from school grounds quickly and school began as normal.

Compass did an analysis of our rate of pediatric illness over these first weeks of school compared to the other state metropolitan areas in the state. Based on rates there, they determined that over 1,600 pediatric cases could have been avoided here if we’d had the mandate in place from the beginning.

In the days since the Friday update, the state has reported 5,608 new cases of COVID-19 Friday afternoon, 3,910 on Saturday, 1,984 on Sunday, and 2,061 on Monday. The state has now reported 1,217,394 cases since the beginning of the pandemic and continues to hold the distinction of having the most cases per capita among the fifty states. If Tennessee were a country, its rate of 178,264 cases per million would rank first in the world among all countries with more than one million in population.

Case numbers continue a steady decline, making clear this surge of the virus is receding. Active cases now number 51,277 across the state, down from 68,410 a week ago. The rate of spread has declined 66% in the last two weeks to 55 cases per 100,000. Having had the worst spread rate in the country a couple of weeks ago, Tennessee now has the 9th worst rate of spread. The seven-day average for new cases is 3,872 per day, down from 5,426 a week ago.

Testing numbers are bouncing around 10,000 to 20,000 per day and the positive test rate is running just over 11%, as it was a week ago. The state remains 36th in per capita testing among the fifty states.

In the days since the last update, the state reported 85 COVID-19 deaths on Friday, 76 on Saturday, 34 on Friday, and 18 on Monday. 14,952 Tennessee residents have died of COVID-19 since the beginning of the pandemic. Over the last week, 502 deaths have been reported, for an average of 72 per day, a rate like mid-February, and up from 45 a week ago. We might presume this will drop soon, given the drop in cases and hospitalizations seen in recent days. The state ranks 22nd in deaths per capita in the U.S., up from 23rd last week.

49 COVID-positive Tennessee children are currently hospitalized, including 16 in ICUs and 5 on ventilators. The numbers dropped lower, then rebounded a bit to be just a bit below where they were a week ago at 65, 19, and 9, respectively.

The pace of vaccinations is dropping in the state, with 93.2 thousand vaccinations given in the last seven days. A week ago, the reported number was over 111,000. As cases drop, the urgency fades among those who are not yet vaccinated. At our current rates of vaccination, 52.2% with at least one shot, and 45.9% fully vaccinated, we most likely will face additional serious surges in the future unless the virus simply mutates itself away.

The wide gap in age groups persists, with less than 40% of those under 40-years-old fully vaccinated, and more than 70% of those over 60 fully vaccinated. The state dropped this week from 43rd last week, to 44th this week in full vaccination rates. We were passed by Georgia.

Since the last report, the Knox County Health Department reported 236 new cases of COVID-19 on Saturday, 153 on Sunday, 74 on Monday, and 128 today. The 74 reported yesterday was the lowest single day total reported since August 10, and the first day below 100 since that day. The average of 118 per day reflects a drop from 294 per day a week ago, and 524 the week before that.

Since the beginning of the pandemic, 59,257 cases of the virus have been confirmed in the county and 14,625 probable cases have been recorded. Active cases continue to drop, reflecting the decline in new case rates. The KCHD reports 3,265 active cases, down from 5,485 a week ago.

The number of tests reported in the county also plummeted this week, down by about 40% to around 6,000. The positive test rate, while still more than three times as high as we’d like, has also begun a sharp decline, sitting at 16.5%, down from 23% a week ago. Test reporting time is now under a day-and-a-half.

Hospitalizations from the virus are now declining significantly. Current COVID-19 hospitalization totals in the 19-hospital central East Tennessee region include 539 COVID-positive patients, 144 of those are in ICUs, and 112 are on ventilators. A week ago, those numbers were 715 hospitalized, 178 in ICUs, and 140 on ventilators. The number of available ICU beds in the region declined from 21 to 14, presumably because those beds are increasingly available for others who need them.

As at the state level, deaths, which naturally lag cases and hospitalizations, continue to rise. Since Friday, the KCHD has reported 29 deaths from the virus. Last week during the same period, the number was less than half as many at 14. Of the twenty-nine who died in the last four days, the vast majority were not in the oldest age group. The deaths included three people between 18 and 44-years-old, twelve people between 45-64, seven people between 65-74, and seven people 75+. Since the beginning of the pandemic, 835 Knox County residents have died of the virus.

Vaccinations continue, but at a very slow, and increasingly slower, pace. 514,604 shots have been given in Knox County, including 7,471 over the last week. Over 8,000 were given in the previous seven days. 56.52% of Knox County residents have gotten at least one shot and 51.89% are fully vaccinated. Both numbers are better than the state, and if Knox County were compared to state rates, it would rank about 25th.