A Look at Recent Murals and Street Art 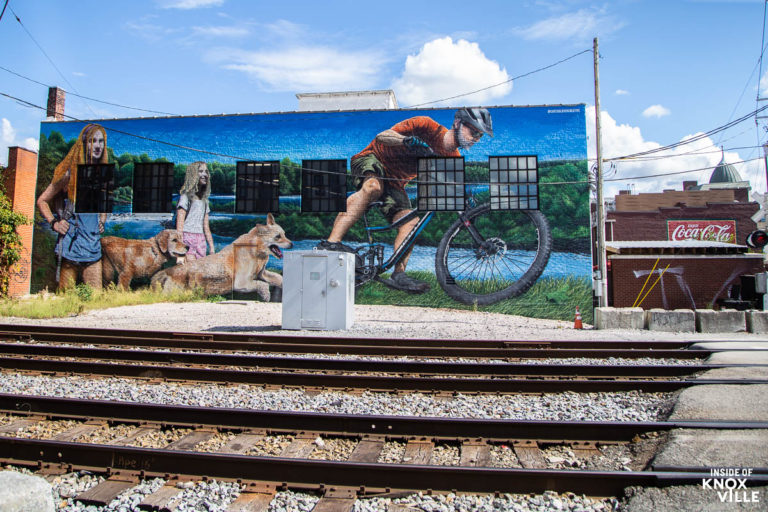 Mural by Curtis Glover, Edge of the Train Yards and the Old City, Knoxville, September 2021

I thought it was a good time to catch up on some of the art that makes our downtown more interesting. One project just finished, while another one was finished some months ago, but I’ve never pictured it here. Yet another interesting piece was discovered recently by the guys over at Compass.

The mural pictured above is by Curtis Glover. Commissioned by the building owner, it shows her family and two of their three dogs. One poor pooch was not shown for artistic reasons. Curtis is one of the most active muralists in the city and is responsible for some of your favorite works. I plan to have a profile on him and show a range of his work in the near future. You can check out his work on Instagram.

The two pieces above are located under the Western Avenue viaduct over Blackstock, near the Concourse at the International. Compass used a photo of the top piece of the two shown above as a part of their “Knox Found,” series and followed up with some great sleuthing work to identify the artist, Mike Lana, who sometimes works under the name “Fresh.” He informed them that the second piece, shown above, was on the reverse side

Mike is currently living in Knoxville and has a show coming up next month at the Emporium, titled “Mike Lana: Beyond the Walls.” From the site: “BEYOND THE WALLS is a series focused on exploring the Bible through recontextualization, modern parallels, and a playful aesthetic delivery that looks to balance material, concept, design, and stylistic juxtaposition to present a fresh view on the greatest story ever told.” The artist adds a partial explanation of the art pictured above, “My work has also become, in part, a concentration on overlooked and downtrodden space and the revitalization of that space through the beauty of stencil street art.”

Another muralist whose work is increasingly on view in the city, is Megan Lingerfelt. Her Dolly Parton mural (a co-work) at the north end of Strong Alley behind Market Square is likely the most photographed mural in the city. Just around the corner from that, her window mural along Wall Avenue has been a favorite as well.

At the south end of Strong Alley, just around the corner from Coffee and Chocolate, Megan changes a mural out with each season. The fall rendition is out just in time for the season and fall all the social media shots. The mural is a part of the “Art in Public Places Mural Program, a public art partnership among Dogwood Arts and property owners, the City of Knoxville and the Downtown Knoxville Alliance. To date, Dogwood Arts has funded the creation and restoration of 22 murals in downtown Knoxville, mainly in Strong Alley,” as per the press release.

Finally, the mural slated for the alley beside Kopita (discussed here) is taking shape. Mother and daughter, Ilana Lilienthal and Orel Brodt, are constructing a mural as a homage to the Imperial Hotel which once set roughly where the Hyatt Place sits today. The mural on plaster features scenes from the exterior and interior of the hotel. Once completed, the alley will serve as a beautiful outdoor seating space for Kopita.