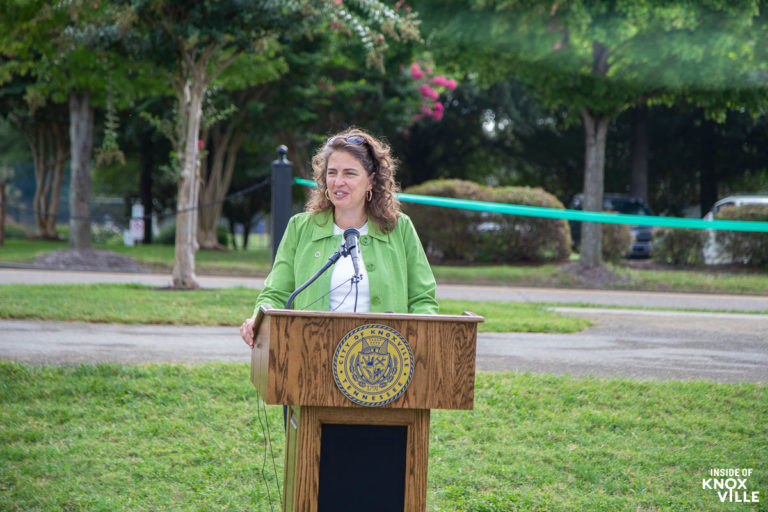 Last week Mayor Kincannon joined the Downtown Knoxville Alliance (AKA CBID) via Zoom to discuss the current efforts to hire a new head for the KPD. Erin Gill, Chief Policy Officer for the city also joined the meeting.

Mayor Kincannon began by acknowledging that public safety and the perception of safety are high priorities for the city. She is charged with appointing the position. It does not require a vote.

She said she has met with numerous community groups and KPD groups and more since she learned in November that Chief Thomas would be leaving. She noted that council has approved the use of an outside search group and said they will help attract a “strong pool of applicants.”

She said it will be a national search, though local applicants would be considered. The city will look towards applicants who are strong in community relations, internal relations, and restoring confidence among those who have had concerns regarding policing issues. She wants to be sure that the department continues to move forward and is enabled to address the surge in violence seen nationwide, as well as in our own community.

She said openness would continue to be a priority, noting that body-worn cameras are now in place for KPD and that by the time their use was implemented, the police department supported it.

Regarding current concerns about homelessness, she said she is looking for someone who “thinks outside the box” regarding how to manage the situation. She acknowledged that is a significant concern and wants to find a new chief who will “embrace innovation and coordinate with social workers and service providers. She stated that at no recent time have the shelters been filled, but said many are not seeking shelter and that is a “huge problem.”

She stated support for school resource officers and said the KPD is hiring for the co-responder teams. She emphasized expanding training for others to know how to respond to panhandling or mental health issues. She mentioned the “low barrier” shelter, The Foyer, which is open to anyone not allowed to go to KARM or other agencies, with a referral from a street social worker.

While acknowledging the need for drug rehabilitation facilities, she said the city does have jail diversion programs for minor offenses, offering detox as an alternative to jail time. The city is working with the state in pursuing a 20 bed behavioral health unit at the old St. Mary’s site. She stated, “Hospitals support it because their emergency rooms get clogged with crisis issues which are not medical emergencies.” She went further to point out that this is a national problem, but is worse in Tennessee because we are one of the twelve states which have not accepted the expansion of Medicaid.

Rick Emmett, Downtown Coordinator, said the planned ambassador program will be helpful for many of these issues. He said it will include four people who will walk the streets, giving directions to visitors, cleaning graffiti, reporting to police behavior they need to address, and discouraging misbehavior, such as aggressive panhandling, that they observe.

He said he spoke to a company last week, which operates a program in several other cities, that may be chosen to operate the program here. He hopes the program is in place and the uniformed ambassadors are on the street as early as April or May. Mayor Kincannon said she hopes it is sooner, but everyone wants them in place for festival season. The $300,000 price tag for the program is being shared by Knox County, Knoxville, Visit Knoxville, and the Downtown Knoxville Alliance.

Mayor Kincannon noted she met with other mayors last week and found common challenges. She said expects a great pool of applicants. She is optimistic that police pay can be improved soon and pointed out that the opening of the public safety complex will be a help to policing, as well. She concluded, “Knoxville is a great city, with a great quality of life and brighter days are ahead.”

The position has been posted and the public can find updates here, and you can provide input on the search via email to chiefsearch@knoxville.gov.