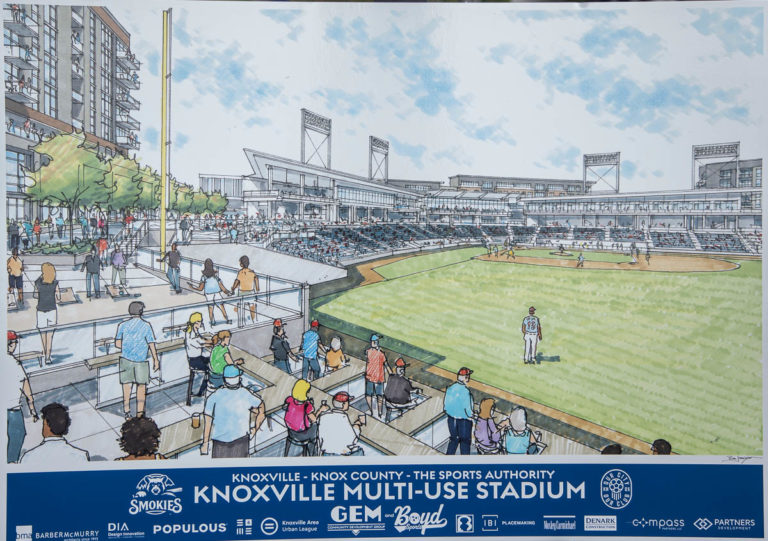 The Knoxville-Knox County Planning Commission discussed proposed development for the baseball stadium and its surrounding area, as well as for the recently discussed new development on Gay Street. While there were numerous additional topics, but the two drew the most interest and will have the most direct impact on downtown.

The commission has a host of rules regarding public forum which might be useful for other groups to note. Presenters are asked to refrain from repeating points already made in the public forum. Additionally, groups in favor of or opposed to particular items are asked to select a single speaker to express their point of view. Imagine the hours and pain which might have been saved if the Knox County Board of Education, Knox County Board of Health, and Knox County Commission had those rules in place for the last year-and-a-half.

The development on Gay Street was included in a long list of “consent” items, all voted on at once. These items have generally been given approval by city staff, as was the case with the Gay Street development. The project can now move to design phase and I’ll bring you any movement on that front.

The baseball issue involved a request for rezoning to allow the desired development. You can read the full application here. The land slated for development is classified as Industrial Mixed Use, General Industrial, and Hillside Protection Overlay. In order to proceed with the project, developers needed exceptions in use, dimension, design, lighting, accessory structures, required off street parking, access and driveway design, and unified signage.

The staff recommended approval, subject to a number of conditions. They suggested a final plan come before commission, assuming city council approval of the preliminary plan, in order to demonstrate that it is consistent with the preliminary plan. They also suggested a landscape plan and other details be provided at that time. They also requested a transportation impact study be completed and made available, as well as a few other details.

Staff noted that the usage changes were consistent and compatible with those typically seen in an urban development. Regarding dimension, they said higher density, closer and taller buildings would be helpful in making the connection between the Old City and the area to the east of the James White Parkway. Regarding lighting exceptions, staff conceded that lighting standards were set with more traditional development in mind, not so much stadiums.

Regarding community benefits, the developers said the proposal will help connect the Old City and east Knoxville, revitalize the area, and increase available housing in the community. They said it provides an increase in goods and services, employment opportunities and it mitigates a brownfield on the site.

Two commissioners recused themselves due to conflict of interest with the project. The project includes about 25.5 acres.

Several people requested to speak in opposition. They were given an extended 10 minutes to do so. Joyce Feld spoke as president of Scenic Knoxville. She referenced the Nine Counties One Vision and noted the expressed displeasure across the community with new billboards. She noted more recent restrictions to digital billboards. She said they were opposed to the exceptions requested by this project regarding signage.

Kevin Murphy spoke representing the Knox County Planning Alliance. He said his group is officially neutral on the overall project. Their concern was the lack of detail regarding precise exceptions. He said they have trust in the designers and the city, but felt a verification step was necessary, meaning how the developers address the exceptions be reviewed as “special use.”

Sandra Korbolick (sp?) spoke, suggesting that some of the exceptions should be reviewed, such as lighting, signage, and landscape. Under ordinary procedure, the commission would have only an up or down vote on the entire project when it returns.

Doug Kirchhofer, CEO of Boyd Sports, and others spoke on behalf of the developers. Micky Sutlif (sp), architect with Barber McMurray and working with Gem Development discussed their approach to the development. He explained the goal of the development around the stadium would be to pull the urban connection through the James White overpass in order to activate the area year-round. He said they were happy to address concerns, but did not want the process to get bogged down with multiple presentations regarding details.

Stephanie Welch spoke on behalf of the city. She said the city has worked long with the group and feels the public benefits are significant and important. She said the city feels strongly that underserved communities in east Knoxville will be served well by this project. She called it a “generational opportunity that we can’t pass up.”

Commissioners expressed the opinion that the opinions expressed by the speakers were helpful. They also said they did not want to put barriers in the way of the developers and that they feel signage and lighting will be considered in other portions of the project.

The question of parking was raised once more and discussed with no real change. The point was made that the residential impact would be similar, but less than a UT game, which nearby residents have to work with just as will be the case with the stadium. Commissioners expressed views that the lack of parking would be problematic and the opposite view, that urban parking is always an issue, but that urban transportation, such as buses will be utilized.

The plan was approved, marking the first time an official governmental body has given an official greenlight to the project.