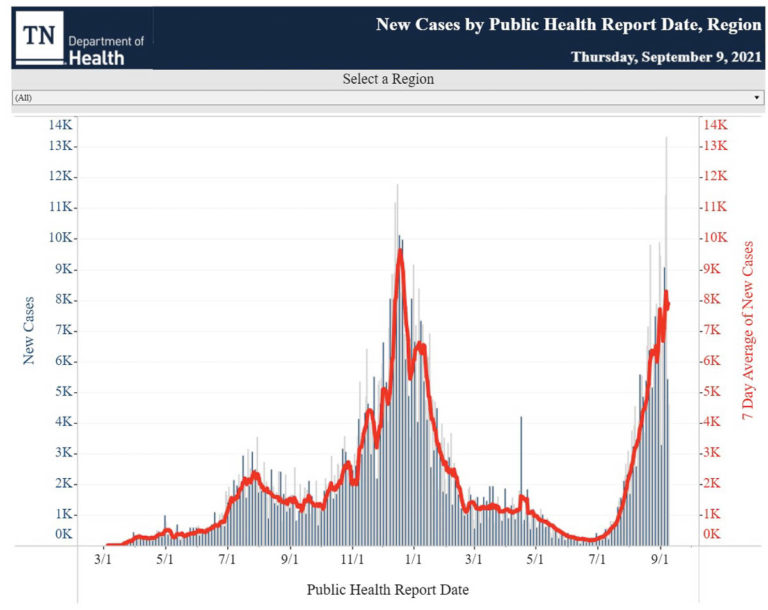 Here’s the Friday report. As usual, we’ll look for the good news, be honest about the bad news, and try to give everyone the information they need to safely navigate a serious situation. The rate of new cases and deaths has begun to drop again around the world. Perhaps the same will be true here, soon.

While still quite high, the rate of cases and deaths has begun to decline internationally, signaling the likely end to the current surge. Also encouraging is the fact that this wave, if it is indeed receding, peaked well below the two previous waves. That may be because increasing numbers of people in several continents are vaccinated, limiting how extensive new outbreaks can become. Or it may simply be due to the capricious nature of the virus. It seems to ebb and flow mysteriously.

Deaths also declined at about the same rate, with the 62,000 deaths reported this week down about 9% from last week. The current daily average for international deaths is 8,746 confirmed COVID deaths each day, down from 9,400 per day the week before. In another example of the confounding nature of the illness, deaths began their decline at the same time as cases, when logically there should be a four-to-six-week lag as previous cases work their way through the population.

41,600,000 cases of COVID-19 have been confirmed in the U.S., as well as 675,000 deaths. The U.S. has reported more cases and deaths from the virus than any other country in the world. In per capita comparisons to populous countries (over 1 million), the U.S. ranks fifth in cases and 18th in deaths.

There are over 9.1 million active cases of the virus in the U.S., up about 400,000 from a week ago. There were just over 1 million new cases in the U.S. this week, down by 12% from the previous week. The seven-day average has dropped to 146,903 per day from 164,185 last week. This could mean we’ve reached the peak in the U.S., or it could reflect under-reporting and under-testing due to the holiday weekend. If it is real, the decline could continue, or it could be undermined by holiday gatherings, the beginning of football games, and the beginning of school this week across much of the north.

The daily average for COVID-19 deaths in the U.S. is now 1,579, up from 1,521 last week and up 28% over the last two weeks. In 2020, the U.S. reported approximately 365,000 deaths from COVID-19, as it became the 3rd leading cause of death and dropped the average lifespan by about a year in this country. Deaths in 2021 will exceed that number if the current pace continues.

Roughly 310,000 people have died in the U.S. in 2021. At the current pace, that number would be about 487,000 deaths in 2021. The average age of those who die this year will likely be lower than last year, having a potentially significantly larger impact on the average life span in America.

About 452.8 million doses of the vaccine have been given in the U.S., including about 6.8 million doses in the last week, a sharp decline from the 11 million given the week before. 63% of U.S. residents have gotten at least one shot, while 53% are fully vaccinated. The numbers last week were 62% and 53% respectively. Vermont, Connecticut, Massachusetts, Maine, and Rhode Island lead in the percentages fully vaccinated. Alabama, Wyoming, Idaho, West Virginia, and Mississippi have the lowest percentages of fully vaccinated residents.

The state of Tennessee has recorded 1,119,545 cases of COVID-19 since the beginning of the pandemic. Total cases in Tennessee from the beginning of the pandemic is now higher per capita (163,936 per million) than any other state in the union. Yesterday, the state reported 4,200 new cases and the seven-day average for cases is now 7,756 new cases per day, up from 7,228 a week ago. Tennessee currently has the highest rate of spread in the country at 101 cases per 100,000 per day. The rate has increased by 26% in the last two weeks. The current pace of new cases is about 456% higher than the same day last year (1,396 per day).

In the last seven days the state has reported two of its three highest single-day totals of the pandemic. Test totals remain low compared to previous levels, with less than 17,000 tests reported yesterday and a 21.1% positive test rate, or about 4.2 times higher than we’d like. The state, which early in the pandemic ranked highly among states in per capita testing, now ranks 35th.

75 additional deaths were reported yesterday, bringing the state total to 13,879 since the beginning of the pandemic. The 83 deaths reported on Wednesday was the highest single-day total since February 11 (100). The state is currently averaging 46 COVID-19 deaths per day, up from 36 a week ago. The current pace of COVID-19 deaths in the state is like that of mid-February 2021. On the same day a year ago, the state was averaging 17 deaths per day.

Hospitalizations remain at their highest point in the pandemic and continue to set new records as they climb each day. 3,846 hospital patients have confirmed cases of COVID-19, while another 187 cases are pending. The number reflects about an 8.4% single week increase over last week’s 3,538. 1,075 are in ICUs, while 755 are on ventilators. Net ICU availability in the state remains mostly unchanged, with 118 beds, or 6% of capacity available. What continues to change is the percentage of ICU beds being taken by COVID patients. Of the 2,036 ICU beds available in the state, 1,098 (53.9%) are occupied by people with confirmed or suspected cases of the virus.

42.7% of state residents are fully vaccinated and 50.7% have had at least one shot, up from 42% and 49.9% a week ago. The state ranks 44th in first shots and 42nd in full vaccinations, down a spot from last week in each category. Consistent with that drop in ranking, the pace of new vaccinations dropped significantly this week, with 105,500 shots given in the last seven days compared to 139,400 shots the previous week. No doubt the holiday weekend had something to do with that. The extent of the drop is attributable to that will become clear a week from now.

The Knox County Health Department has reported 2,935 new cases in the last week, for an average of 419 cases per day. Last week the total was 2,509. Within that seven-day period, however, there have been massive swings in reported numbers, from 933 reported on Tuesday to 113 reported today.

Demand for testing continues to surge, with about 14,000 tests conducted in the last seven days, up from 12,000 the week before. The number of tests administered this week is the second highest total of the pandemic for the county, below a week in mid-December 2020. Not unrelated to that surge, test response time has lengthened to 3 – 4 1/2 days. According to the state, the current positive percentage rate for the county is 19.2%, down from 22% last week.

In the 19-hospital regional area, 728 COVID-positive patients were currently admitted, including 181 in ICUs, and 131 on ventilators. These numbers are all up from last week, when reported cases for each category numbered 657, 158, and 107. There were 40 patients awaiting testing, including 3 in the ICU and 1 on ventilators. Of the 317 ICU beds in the region, nine were available. Of the total ICU beds, 58% are occupied by COVID-positive or COVID-pending cases.

The latest report from UT Hospital indicates 167 current COVID-positive hospitalizations, up from 155 reported a week earlier. There does appear to be a “flattening of the curve,” for new hospitalizations. They report that 85% of these patients are not fully vaccinated. The average age of those in intensive care is 56 years old. Covenant Hospitals are reporting 361 COVID patients, with an average age of 57 and 92% unvaccinated.

East Tennessee Children’s Hospital is, so far, seeing a different trend from the state in pediatric hospitalizations, reporting 23 children with COVID-19 were admitted to the hospital this week, compared to 11 last week. Of the 23, five were 0-5 years old, three were between the ages of 6 and 11, and 15 were 12-years-old or older. By the date of the report 12 remained hospitalized, including 4 in the ICU, as compared to 7 and 1 a week earlier.

After reporting 10 deaths two weeks ago, and 23 deaths last week, this week the KCHD is reporting 22 deaths, which brings the county total to 729 COVID-19 deaths since the beginning of the pandemic. The deaths continue to trend younger, with the deaths this week including three people between 18-44, six people between 45-64, seven people 65-74, and seven people 75+.

The county’s vaccination rates have barely budged over the last week. 55.21% have had at least one shot and 49.84% are fully vaccinated. Last week those numbers were 54.44% and 49.02%, respectively. 8,083 shots were given in the county over the last eight days (there was no update last Friday), compared to 10,349 the week before.

After continued ups and downs — some dramatic on back-to-back days — the Knox County Schools are reporting 485 total active cases of COVID-19, representing 395 students and 90 staff members. 734 cases were reported a week ago and in between the reported numbers ranged from 331 to 746 — and the extremes were on back-to-back days.

The numbers presented by Knox County Schools continue to be challenged as they do not appear to correlate with state case numbers for the same age group in the county. The explanation offered by the schools this week (linked below) seemed in sum to say, “Our numbers are not reliable, and we don’t expect that to change.”

A local bus driver died of COVID-19 this week (link below) and an elementary special education teacher who had acknowledged on FB that she had COVID, has died. No one has confirmed a cause of death and the school system has not released a comment acknowledging the death.

The University of Tennessee, which resumed daily reporting this week, has confirmed 202 current active cases, down from 256 last week. The number dropped for several days before moving upward for each of the last three days. The current total includes 170 students and 32 employees.