Get Your Knoxville Music in the Fresh Air 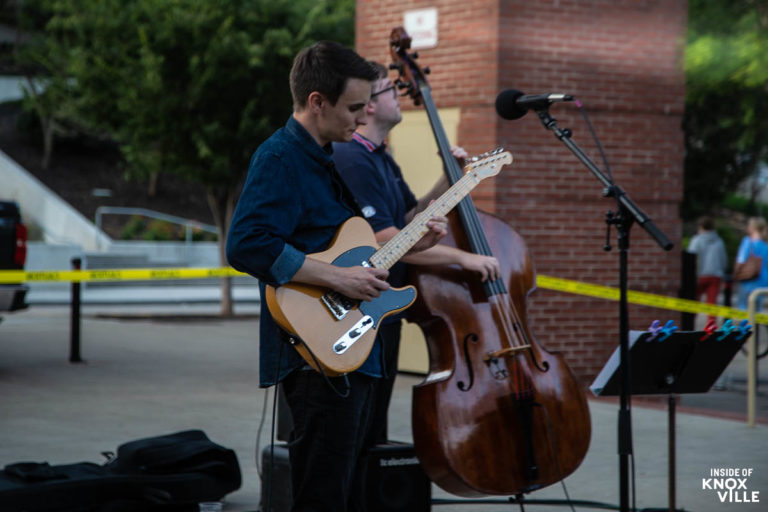 I think many live music lovers in the area might agree that this is a good time to hear some great outdoor music. Second Bell Festival successfully brought outdoor festivals back to the area a couple of weeks ago and now there are a range of outdoor musical events being served up over the next few weeks. Let’s take a look at some of the outdoor shows coming your way in the downtown and near downtown area.

For each of them, you’ll need to judge your own risk comfort, as they do involve the gathering of crowds. That said, outside is better than inside, throw on a mask if you feel it’s necessary, and stake out your turf.

You can start getting your outdoor music fix tonight! The Knoxville Symphony Orchestra will perform a free concert on Market Square starting tonight at 7:30 p.m. The concert marks their first of the 2021-2022 season and they will perform both classical and pops pieces, ranging from Rossini to the Beatles.  The group will also offer a free outdoor concert at the Knoxville Botanical Garden next Thursday, Sept. 16, at 7:30 p.m.

Jazz on the Square

It’s back in an abbreviated season running a bit later in the year than it has in the past. This one makes my heart happy as it is one of my favorite music series of the year and I dearly missed it in 2020. It started last night with a trio led by guitarist Jack Roben and it was delightful. The weather was cool, there was a bit of a breeze. I would guess a couple of hundred people attended and, for the most part, sat in our chairs or on blankets more than six feet apart.

Upcoming shows, presented by the City of Knoxville, include an octet led by trombonist Don Hough on Tuesday, September 14. That is followed by two consecutive Tuesday’s with the great Greg Tardy and his quartet. Starting time for the shows appears to be 7:30, though I saw other times listed. The show last night flowed for two hours.

Just announced yesterday, this new series presented by Visit Knoxville, the Tennessee Department of Tourist Development, and Born and Raised Productions, promised to bring the biggest acts to the nicely enhanced performance lawn since the Hot Summer Nights concerts many years ago.

The series picks up October 10 with shows for four consecutive Sundays. These will be evening shows, but specific showtimes and opening acts to be announced. Tickets go on sale tomorrow morning at 10 a.m. here, and prices start at $10 for each show. You’ll also find more information on the bands there. A portion of the proceeds go the Sunsphere Fund dedicated to the preservation and enhancement of the iconic Knoxville landmark.

There are two other venues offering outdoor shows this fall. One is downtown and the other is just a few minutes outside downtown with a shuttle picking up from three downtown locations.

First, recently announced venue The Outpost has a slate of outdoor shows set for this fall. Located at 808 State Street, just a block off Gay, the venue and concert series are operated by Born and Raised Productions, mentioned above. Tickets for their shows are already on sale, along with season passes and VIP season passes. Their season starts tomorrow night and the line up includes:

This venue is just a few minutes out of downtown via Magnolia Avenue. The site of a former drive-in movie (I wrote about it here.), plans call for elaborate accommodations on the site. But there’s no reason to let a large field go to waste in the meantime! They’ve set an Under Construction Jam for October 14, featuring Keller Williams and The Infamous Stringdusters. Tickets are available on the website and all your questions are answered there, as well. The concert benefits East Tennessee Children’s Hospital.

So, there you have it. More outdoor concerts in and around downtown than you can shake a mask at. Make your plans and keep safety in mind. Mosh pits are probably not your best play.