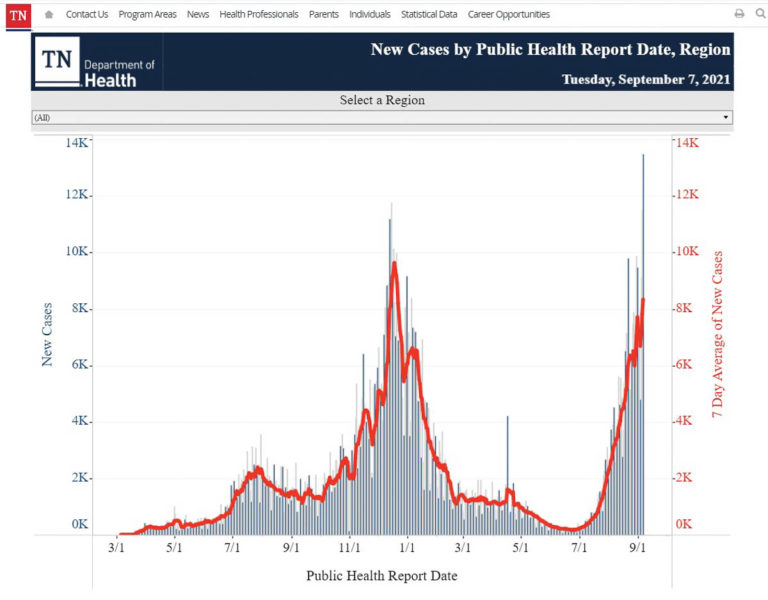 Due to the fact that Tennessee gave no COVID-19 updates through Monday and only did so late Tuesday, there was little reason to report state data yesterday. Additionally, the KCHD and KCS reports were not issued until late in the day and so local data was not available by my usual deadline. With the late-day data from the KCHD came the announcement that they are resuming daily updates.

Given limited data, I moved Tuesday’s COVID-19 report to Wednesday afternoon for this week only. I intend to give my more expansive Friday report on schedule. At this time, I plan to continue reporting twice weekly, Tuesdays and Fridays.

Along with not reporting Saturday through Monday, the state also grouped a large number of cases from the first of those three days, with the cases reported on Tuesday. The result was the largest single-day number reported during the pandemic, of 13,506 new cases. While the day is distorted by the shift, the seven day average, if I understand what the state did with the numbers, would be the same, regardless, as these cases would have simply fallen elsewhere in the seven-day period.

Tennessee is averaging 8,337 new cases per day over the last seven days, up from 7,228 reported here on Friday.  As linked below, about one out of every seventy-five Tennesseans (88,940) currently has an active case of COVID-19, the highest it has ever reached. The only other comparable period is December 2020, during which the average daily number of cases was higher (9,638 on December 19), but the number active cases peaked at just over 72,000. Over 1.1 million Tennesseans have been diagnosed with COVID-19 since the beginning of the pandemic.

According to the New York Times, Tennessee has the worst rate of COVID-19 spread in the country at 46 per 100,000, a rate that has increased by 24% in the last two weeks. The rate of spread is about six times higher than it was at this time last year in the state. While yesterday’s eye-popping number is explained by a shifting of cases, it is important not to loose sight of the fact that the day before (Monday) the number was 11,575, which would have been the second highest single-day case report since the beginning of the pandemic.

Testing took a leap in yesterday’s report, as well, with over 63,000 tests being reported, though it would seem safe to assume some portion of this was also due to the reporting issues with the holiday. The positive test rate fell to 18.25% from the almost 25% reported on Friday, though it remains at nearly four-times the recommended level. In other words, we are not finding all the cases and our large numbers, as bad as they are, are underreporting the true picture.

Based on the data currently available, Tennessee has averaged 34 deaths per day from COVID-19 over the last week, down from 36 reported on Friday. This feels like a number that may shift as more reports are assembled following the holiday weekend, though perhaps not. 24 deaths were reported by the state yesterday. A year ago today, the state was reporting a seven-day average of 18 deaths per day.

Hospitalizations from COVID-19 in Tennessee are at their highest point ever, with 3,776 COVID-positive Tennesseans in the hospital, up from 3,538 reported last Thursday. The state reported a net increase of 92 hospitalizations yesterday. 1,083 of these patients are in ICUs and 746 are on ventilators, up from 967 and 702 reported here on Friday. If there is a sliver of good news on the hospitalization front, it is that pediatric hospitalizations have dropped from a peak of 86 on Saturday, to 67 reported yesteray.

One aspect of the numbers I mentioned last week, which I find a bit confusing, is ICU capacity in the state, which is currently listed at 95%. ICU usages for COVID patients has climbed relentlessly in recent weeks, while this number remained at 6% availability and has only now dropped to 5%. The current report lists 2,042 ICU beds in the state, with 102 available. With 1,083 of those taken with COVID patients, that means the number of non-COVID patients in ICUs is 857.

116 beds were available in the last report, and with 116 more COVID-positive patients taking beds, it would seem capacity should have been reached, yet there are still over 100 available. The only explanations I can imagine are that some of these patients were already in ICUs, but were awaiting confirmation of their COVI-19 status. There are 20 pending cases in ICUs right now, for example. The other possibility is that non-COVID ICU numbers are dropping by reducing surgeries, etc.

50.4% of Tennesseans have gotten at least one shot of the vaccine, while 42.5% are fully vaccinated. These numbers are up from 49.9% and 42% reported here last Friday. The state ranks 44th among the fifty states in first vaccinations and 43rd in full vaccinations. We’ve fallen behind Louisiana in full vaccinations since the last report. The pace of vaccinations slowed significantly this week, though perhaps some of that was due to the holiday. 114.4 thousand people were vaccinated over the last seven days in the state, down from the seven-day total of 139.4 thousand last reported here.

Younger groups continue to lag in vaccination rates compared to their older neighbors and family members. Only 24.3% of 12-15-year-olds are fully vaccinated and the number only rises into the low 30% range for those in their late teens and 20s. The rate increases with age to a peak among 70-80-year-olds who have a 77.4% vaccination rate.

With yesterday’s data, the KCHD released the following statement:

It is incredibly important that everyone in our community follow prevention strategies to reduce the spread of disease and protect each other. First and foremost, if you have not yet received the COVID-19 vaccine and are eligible, please get vaccinated. The vaccine is effective at preventing serious illness and death from COVID-19 and is still the best tool we have at ending this pandemic.

Additionally, practice a layered mitigation strategy while in public. This includes wearing a mask, physical distancing, regularly washing your hands and staying home if you are sick or have been asked to isolate or quarantine. By following these basic infection control guidelines, we can reduce the spread of disease in Knox County and prevent more people from getting sick, going to the hospital and dying.

Thank you for doing your part to protect those around you. It will take all of us working together to turn the tide.

The point was made in the same release, that the data point for new cases released yesterday (933) included cases from the previous several days and would have been lower had the data backlog not occurred. Again, this does not change the seven-day average which has suddenly gone up more steeply. To get a better idea of the current rate, after cleaning out the backlog, Knox County reported 665 new cases today. Disregarding yesterday, 665 is the second highest daily total of the pandemic, below the 724 reported on December 19.

Demand for testing has surged along with the surge in the virus, with more than 12,000 tests taken in the last week, a new pandemic record. With that surge in demand comes longer lab turnaround times, with return times now running three to four days. According to the state website, 21.4% of those recent tests have been positive, down slightly from the 22% previously reported and more than four times as high as epidemiologists say it should be.

In the 19-hospital regional area surrounding and including Knox County, 732 COVID-positive patients are currently hospitalized, up from 657 reported on six days ago. Of these, 180 are in ICUs, up from 158, and 124 are on ventilators, up from 107. There are 9 ICU beds available in the area, with 180 ICU beds taken by COVID patients and 127 by non-COVID patients. Again, as at the state level, there are more COVID cases in ICUs than for all other reasons combined.

East Tennessee Children’s Hospital updates its pediatric COVID-19 numbers each Wednesday and they are reporting 23 children have been admitted in the last week, with 12 children currently in the hospital and 4 in ICU. Last Wednesday they reported fewer than half that number having been admitted for the week (11), and they had 7 COVID-positive children in the hospital, with only one in ICU.

The county reported an additional fifteen deaths from COVID-19 in the last six days. As has been the case in recent weeks, those dying below age 75 continue to outnumber the deaths among older patients, though the margin was tighter in the current numbers. In the last six days, one person 18-44 died of the virus, four people 45-64 died, three people 65-74 died, as well as seven people age 75+.

Vaccinations continue but, as was noted above at the state level, the numbers have slowed. As they need to accelerate, perhaps the slowdown is due to the holiday and they will pick up pace once more. 49.63% of Knox County residents are fully vaccinated, while 55.04% have at least one shot.

One final note on county numbers as a whole, this week Stacker released lists (linked below) for each state detailing the fifty counties with the highest COVID-19 death rates. I was curious where Knox County would land. The answer? Not listed. Nor were Davidson, Shelby, or Hamilton Counties. While some counties were more rural than others, it was largely a list of rural to very rural counties.

Due to the larger populations in the metro counties, and consequently higher death totals, it is easy to think people are dying in cities, while, in fact, they are dying at higher rates in rural counties. Picket County had the highest death rate at 475 per 100,000, even though they’ve only had 24 COVID deaths. Johnson County had the fiftieth highest rate at 225 per 100,000 (40 deaths). Knox County has had 151 deaths per 100,00.

Knox County Schools are reporting 331 active cases (or they were – the system is down as I write this), down from 734 cases reported here on Friday. It is interesting that the number is about a third of what it was a week ago. There could be a delay in identifying new cases over the holiday. The state is reporting far more pediatric cases for our county than those being reported in the schools. I expect this number to shoot back up very quickly. Or maybe the virus has peaked in schools? The University of Tennessee is reporting 190 active cases, including 165 students and 24 staff members, down from 256 active cases reported here last Friday.

Regarding schools, there was a point during last weeks 6+ hour Board of Education meeting when a member read data seeming to indicate that Knox County students are experiencing about the same level of illness as the other three metropolitan counties in the state, despite the fact that they have mask mandates and we do not. Current data, pointed out today by Compass, indicates the other systems are, in fact, running just over half the infection rate of Knox County.